Over the past few years, the popularity of personalization and customization in the gaming community has sky-rocketed especially when it comes to gaming PCs. Nowadays, every PC build is almost a bespoke masterpiece that perfectly pays homage to the person who owns it. This move has certainly been influenced heavily due to the popularity of RGB lighting. Thus, enthusiasts are more open to the idea of installing a fan controller in their PCs nowadays that can control both the functionality and the lighting of the fans at once. 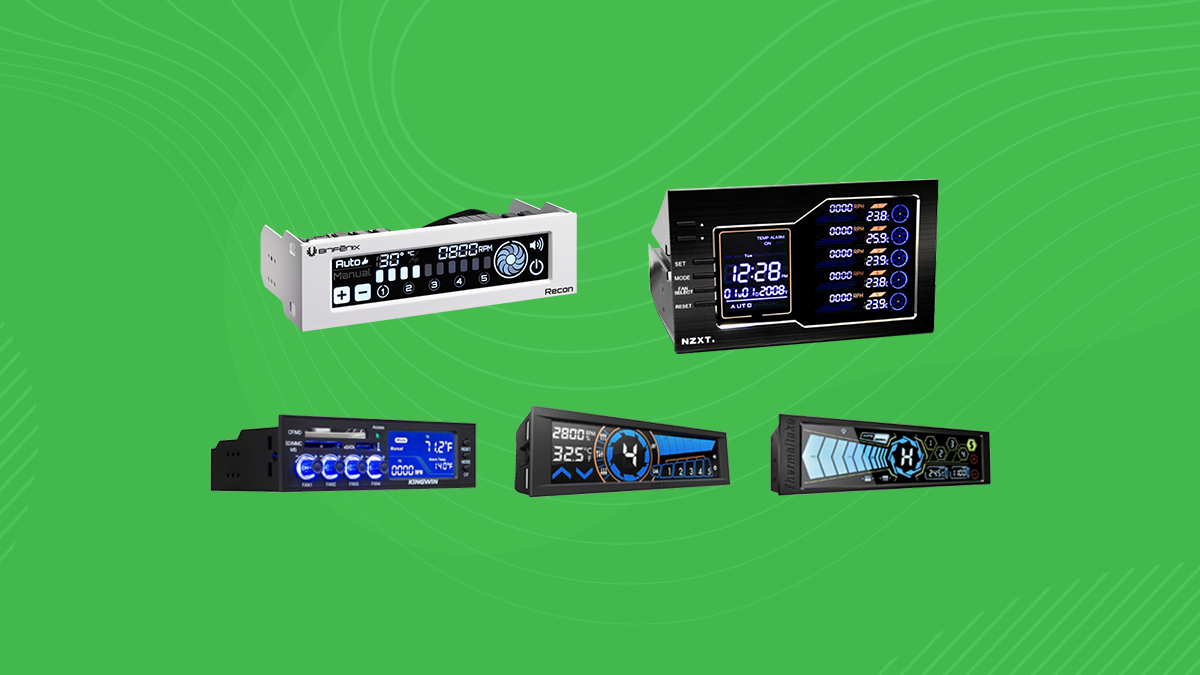 Fan controllers are a quite overlooked part of the PC hardware industry. When purchasing a fan controller, one should keep in mind the number and type of fans that they wish to connect to the controller. Furthermore, case compatibility should be ensured beforehand by taking a look at mounting options and dimensions of the controller from the product page. Many controllers on the market also support synchronization of RGB lighting, but there are some that still lack this functionality so it should also be checked beforehand.

Recommendations for the Best Fan Controllers for Gaming PCs in 2021

Below are our picks for the 5 best fan controllers for your gaming rigs in 2021.

NZXT is renowned in the industry for making some of the most premium products in their categories, and the Sentry 3 fan controller is certainly no exception. It is quite simply one of the most versatile and practical fan controllers currently available on the market right now.

The Sentry 3 is a follow-up to the Sentry 2 lineup of fan controllers, and it now has a touch screen for displaying various statistics as well as for controlling the speeds, etc. Having a touch screen makes the whole process quite intuitive, and also improves the perceived quality of the product. The Sentry 3 has the option of both 3-pin and 4-pin connectors, and that makes it a versatile option with both DC and PWM options. With the NZXT Sentry 3, you can have up to 3 fans per channel (a total of 5 channels) which is more than sufficient for the average consumer.

Another great feature of the Sentry 3 is that you can set up profiles for each channel to control the speeds. The controller also comes with an integrated temperature sensor which can be used to set a threshold for fan RPMs and to modify the behaviors of the fans. The screen spans 5.4 inches diagonally and makes the whole experience quite a bit better and certainly more intuitive.

The NZXT Sentry 3 is, without a doubt, one of the best fan controllers available in this category right now. Its multitude of features, great build quality, and implementation of a screen set it apart from the rest, although it does come at a bit of a price premium.

Another solid option comes from Kingwin with their FPX-008 fan controller. This controller can be described as the ideal option for people who want maximum functionality without completely breaking the bank. The controller itself is easy to install even for beginners, quite durable and has a very straightforward interface.

The Kingwin FPX-008 employs 4 channels, with 3-pin headers and is made to be mounted in 5.25-inch bays. Those optical drive bays are becoming less and less common in cases of today, but if you still have one of the classic cases then these controllers can be mounted in their optical drive bays. On the front of the controller, there are several knobs along with a bright LCD display that displays the temperature and the RPM of the fans attached. Knobs can be used to adjust the different parameters of the fans on the fly.

The setup process for this controller is relatively straightforward. Kingwin provides a whole host of cables that may or may not be required by every buyer, but they are certainly nice additions. Moreover, the mounting option of 5.25-inch bays is also quite convenient for most people with older-style cases. The build quality of the FPX-008 is a bit of a letdown as Kingwin has opted for cheaper plastic to make the housing of the controller, but otherwise, it is an excellent option overall.

If you are looking for a high-end alternative to the NZXT Sentry 3 and also want to save a bit of money along the way, then this one should certainly be on your priority list. It does have some minor quirks here and there, but it certainly delivers on multiple bases for the most part.

At number 3 on our list is the versatile Thermaltake’s Commander F6 RGB. The design of this controller certainly stands out as it offers a relatively clean aesthetic, which can be hard to find with products like these. It also delivers some excellent features in a well-rounded package.

Right off the bat, it should be noted that the Commander F6 has 6 channels for connecting the fans. This makes it quite a functionality champion, as it has the potential to be something more than just a desk controller for the average consumer. The controller supports the 3-pin as well as 4-pin MOLEX connectors, so you will not have to worry about compatibility issues in the least. The Commander F6 also comes with in-built temperature sensors that can come in handy if any component is overheating. This, along with the extra measures taken by Thermaltake to ensure that power surges do not cause any damage, proves how well thought out this controller is.

The overall design language of the controller stands out quite a bit. It offers a clean, minimalistic aesthetic that is quite popular in the PC gaming community nowadays. However, it is certainly not perfect as the screen does have a tendency to be unusually difficult to interact with, so this is an area where the controller falls a bit behind the competition. The Commander F6 also lacks any RGB synchronization functionality, so that is something to keep in mind as well.

Silverstone has shifted its focus to the value-oriented side of things with the Silverstone PWM fan hub. Although this controller is certainly not the most premium piece of hardware on our list, it certainly packs a decent punch considering its compact size and affordable pricing.

The Silverstone fan controller can support up to 8 PWM connectors, which is quite impressive for a compact, budget device. Also, it can extend its compatibility by supporting 3-pin fans on 4-pin headers, which makes it a good choice for older PCs as well. The construction of the Silverstone fan controller is satisfactory, and there is nothing to complain about considering the price. It does not fit in a drive bay, instead, you can attach it via magnet to the steel panels of your case which is quite convenient considering its compact size.

The most notable feature about this controller is that it draws power by means of a SATA cable directly from the PSU. This means that it is capable of handling higher wattages and currents with minimal chances of power surges through it, thanks to its 2200uF capacitors. There are some notable problems with this controller as well. There is a complete lack of temperature sensors in this option, and the controller lacks any PWM support for 3-pin fans as well. These issues, however, can be dismissed considering the competitive pricing.

All in all, the Silverstone PWM is a budget-oriented offering that provides basic functionality quite well. It is also quite compact, which is something that can be a popular selling point. There are some missing features too, but those are not deal-breakers in the bigger picture.

The Zalman Fanmate-2 has a “back-to-basics” approach to functionality as it offers just the most rudimentary of features at an extremely competitive price point. This is not an option that is going to blow anyone away with its design or features, instead, it is aimed at the user who just wants the basic functionality of a fan controller.

The Fanmate-2 has support for only one fan in its miniature size which is controlled by a small knob present on the housing. On the bottom, Zalman has provided some double-sided adhesive tape that will allow you to stick the controller to your case or anywhere you wish. This is certainly not the most elegant solution by far, but it is something that can be ignored at this price point.

The installation of this product is very quick and painless since it is a compact bit of hardware with only one fan channel. However, it does not allow speed control for the only fan, which is a letdown even considering its budget nature. The controller also has DC ratings on it indicating that only 100% or 0% speed is supported. Its small size and basic nature earn it a narrow pass in this category as well.

As stated, Zalman’s Fanmate-2 offers the option for only one fan, and that too with not a lot of features and controls. The plastic quality feels really low-grade and there is no mechanism for voltage controls. Bear in mind that if your fan has a startup voltage requirement of 5V, you risk frying the components of the controller itself as it simply cannot provide that much output power.

The Zalman Fanmate-2 is not meant to compete with some of the high-end options on our list, instead, it is aimed at the user who just wants the basic functionality of a fan controller. The feature list of this controller is rather short and the build quality is passable at best, but it does have a place in the market due to its competitive pricing.

By default, PC fan controllers are not necessarily needed because most PC fans can be connected directly to the motherboard to function. However, if you have many fans and want to synchronize their operation, then the fan controller becomes necessary. Fan controllers are also used often to sync the RGB lighting of all the fans via a single interface.

How can I control my computer fan speed?

Do you need a fan controller for RGB?

If you are using a single RGB fan and your motherboard does have an RGB or ARGB header, then you can connect the fan directly to the motherboard to control its RGB. If you want to synchronize the lighting of multiple fans then it is best to get an RGB controller. Most fan controllers on the market also include the functionality of synchronizing RGB lighting.

Should I get a fan hub or splitter?

A single fan header on the motherboard can be split to accommodate two or even three fans by making use of an inexpensive splitter. If you only have a couple of fans, then you can use a splitter to conveniently split the header. However, for more fans (say 5 or 6) a fan hub would be the better choice since it can accommodate all the fans by providing them with external power straight from the power supply.