A cooling solution is a crucial component of a computer system that should not be ignored. Unlike most of the other components, it is not giving any direct advantage or any certain specification through which we can feel its essence, however, the computer can not work properly and efficiently without a good cooling solution. Intel Core i7-7700K is the fastest mainstream processor from the seventh generation and as the letter ‘K’ denotes, it is an unlocked processor. This means that the user can change the multiplier of the processor leading to much better processing speeds, however, also heats up much more than at the stock configurations. 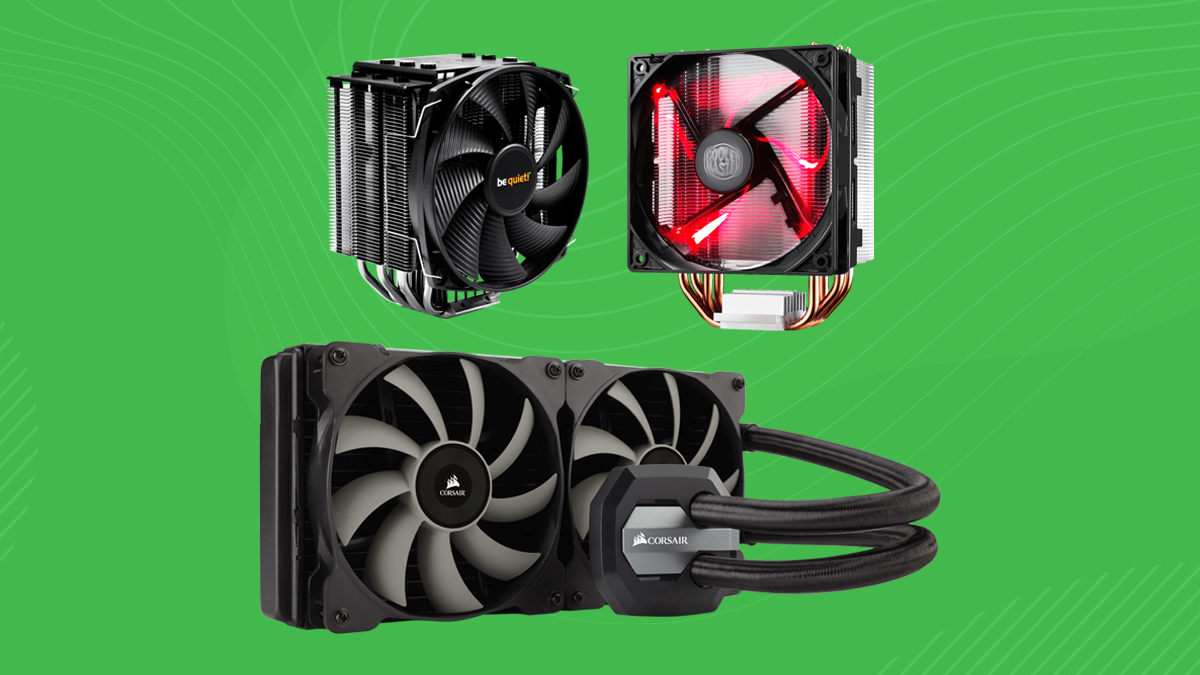 There are a lot of cooling solutions available in the market but many low-end coolers would end up throttling an overclocked i7-7700K processor. For this beast of a processor, we need a high-end cooler which would not only stop its thermal throttling but also enable us to achieve low temperatures so that the life span of the processor can be increased. Therefore, before you start pushing your 7700K to its limits, you should look into the top 5 cooling solutions we’ve offered so that your CPU can stay healthy for a longer period of time.

Kraken X72 is a masterpiece by NZXT and it is among the top-performing AIO coolers in the market. The cooler provides a circular block which is beautifully lit by RGB lights and increases the overall looks of the system by quite a margin. There is an NZXT logo at the centre of the block, which, along with RGB lighting, looks spectacular. The radiator comes with three Aer P120 fans which spin relatively faster than other coolers, thus providing better performance at the expense of noisy operation.

The base of the cooler has a smooth copper block on which there is some pre-applied thermal paste. There are two ports on the block; a mini-B USB port and a 9-pin port. The mini-B USB port can be connected with a 9-pin USB 2.0 header cable allowing management through the software while the 9-pin port can be connected to PWM splitter so that the user can also control the fans through the software.

We observed impressive cooling performance during operation and there was around 50-degrees delta temperature with an overclocked hexacore processor. The software was a bit messy and we could barely control the fan speeds, though we think this will be fixed by NZXT soon. The Kraken X72 offers top of the line cooling solution for your PC and will be perfect for the overclocking enthusiasts. It was able to handle an overclocked hexacore processor, although the noise levels did become a little high. But be prepared to have a big chunk taken out of your wallet for this cooler will not come cheap.

Hydro Series H150i Pro RGB is the flagship AIO cooler by Corsair and it is the best performing cooler of the company. It will silently keep your 7700K to acceptable temperature levels while radiating vibrant and beautiful RGB colours. The pump is rectangular in shape with round corners and provides RGB lighting, which also lights the Corsair logo. The radiator comes with three ML series fans, which are known for their high static air pressure while keeping the noise very low.

The cooler’s base is similar to NZXT X72, having a copper block at the base. However, the cooler draws power through a 12-pin SATA cable while there is a micro-B USB port on the pump providing accessibility of the features through the Corsair Link software. There is also a 4-pin ribbon cable coming out of the pump which can be used to control the fan speeds through the software. This cooler also comes with pre-applied thermal paste, which is not recommended to use unless you don’t own a high-quality thermal compound.

The performance of this cooler was a bit disappointing and there was a difference of 5-7 degrees between this and the NZXT X72 while testing with similar configuration. For some, this may be a dealbreaker as they want nothing but the best. Whereas others might not even care about the 5-7 degree difference. But you cannot dispute the fact that the H150i Pro handles high loads efficiently. Additionally, due to low-noise and low-RPM fans, the acoustic levels of this cooler were noticeably better.

If you care for the noise levels and want a sufficient cooling solution, the H150i Pro will provide a good value to you. It is not as premium Kraken X72 but the H150i is cheaper. Additionally, CORSAIR’s iCUE app provides tremendous lighting and customization features which, if you own other CORSAIR products, is something that you will really appreciate. And our tests show that the H150i performs quite well in high-loads while not being too noisy. Isn’t that what you really want from a cooling solution?

We’ve already talked about the H150i Pro cooler by CORSAIR in their Hydro Series lineup, but the H115i Platinum also deserves some recognition and praise. The H150i features ML140 fans which are just excellent, however, I can’t help but wish that the build quality had given off a more reliable and durable impression. Still, it gets the job done so no harm is done. The H115i Platinum uses appeals to its fans by letting the H115i support both Intel and AMD processors. With CORSAIR’s ever-growing lighting ecosystem controlled by iCUE app, the H115i is able to show off some remarkable colours.

The H115i cooler comes with a copper base with pre-applied thermal paste. There isn’t much difference in the H115i from the H150i, both being from the Hydro Series lineup. The mounting brackets have a 90-degree swivel about them which helps fit them into place easier. The fans draw power from a SATA connector and provided lighting and PWM control using a 2-way splitter. And just as you’d expect from CORSAIR, the lighting is phenomenal. The 140mm fans with magnetic levitation radiate colourful RGB lights that really bring your setup to life.

The H115i Platinum fans can get a bit noisy at full load- going up to 40dB of noise. The thermals are really not that different from the previously mentioned cooler however, the noise levels can be a bit of a bummer. Luckily, the noise levels are troublesome only at high loads and not at average use. At 4600MHz in idle mode, the H115i was able to maintain a temperature of 31 degrees Celsius whereas it was stable at 70 at full load. In Zero RPM mode is that the fans do not kick in until the coolant goes to 40 degrees temperature. This threshold seems a bit too high so you ought to be careful with that.

The H115i Platinum is a well-rounded option for a cooling solution. And as coolers go, it is not that expensive. But where the H115i Platinum lacks in software optimization, it makes up with its vast array of vibrant RGB colours. If you’re not looking for something to back you up while you clock your CPU to the max, then H115i will be quite sufficient. Its threshold for when the fans are turned on might be a bit too high at default settings so we advise overclockers to keep that in mind. Plus, CORSAIR’s RGB is something you really can’t be wrong with.

Noctua is a well-known brand when it comes to CPU coolers. The first thing that comes to mind after hearing Noctua is their brown-themed fans along with beefy coolers. Noctua NH-D15 fits perfect to such a description and it is probably the best air cooler that has been tested. There are two NF-A15 fans, where one of them sucks the cool air from the front end and the other one is used in-between the dual-tower style cooler.

The cooler is quite heavy, especially after attaching both fans and as it can be guessed, the cooler does not provide a good enough RAM clearance, which is why you need a RAM with a low height if you want this cooler. If you own RAM sticks having a big height, then you can alternatively disassemble the front fan, in which case it will have an impact on the performance. The cooler also comes with its own thermal paste Noctua NT-H1, which is considered as one of the best thermal pastes.

Surprisingly, this cooler provided much closer thermal results to the 360mm AIOs, which was unexpected, although things could have been a bit different if the testing was performed on a dedicated processor. If you are afraid of the risks being brought by AIO coolers and still do not want to compromise on the thermal performance, this cooler will do just fine. Although make sure that you think about the theme of your setup before considering it.

Cryorig’s products are known to be designed with passion, as the company is built by PC overclockers and enthusiasts. Cryorig R1 Ultimate is their flagship air cooler which provides a great competition to the king of coolers, NH-D15. Although with a similar dual-tower design, this cooler provides much better aesthetics, as the XF140 fans are black in colour and look much better. Alas, this tower-like design can end up blocking some of the space that you might need. And that can be a huge dealbreaker for some folks.

The height of the front fan can be adjusted to allow better RAM clearance. A maximum of 35mm clearance can be obtained, which still, is not enough for some high-end RAMs. In this case, Cryorig sells a thinner fan, XT140 which can be used instead of the front XF140 fan, thus avoiding any clearance issue. This dual tower fan with two heatsinks weighs over your PC and takes up quite a big chunk of space. In fact, it can end up blocking some RAM sticks in the DIMM slots and that can cause a lot of problems. Therefore, you should take a gander at the available space you have before investing in this cooler.

This cooler provided us with slightly higher temperatures than the NH-D15, which was almost within the error range. The cooler comes with CP-7 thermal paste, which is a bit below the NT-H1 thermal paste but still gets the job done efficiently. If you are annoyed by the colour theme of Noctua, then this cooler can be your best bet.