Proper cooling is essential for people who want to keep temperatures at bay. This applies especially to the CPU, as it’s the component that works the hardest. Furthermore, this allows you some overclocking headroom as well. This is important if you want to get more performance out of a premium processor. A custom loop allows you to push a PC’s performance to its limit. 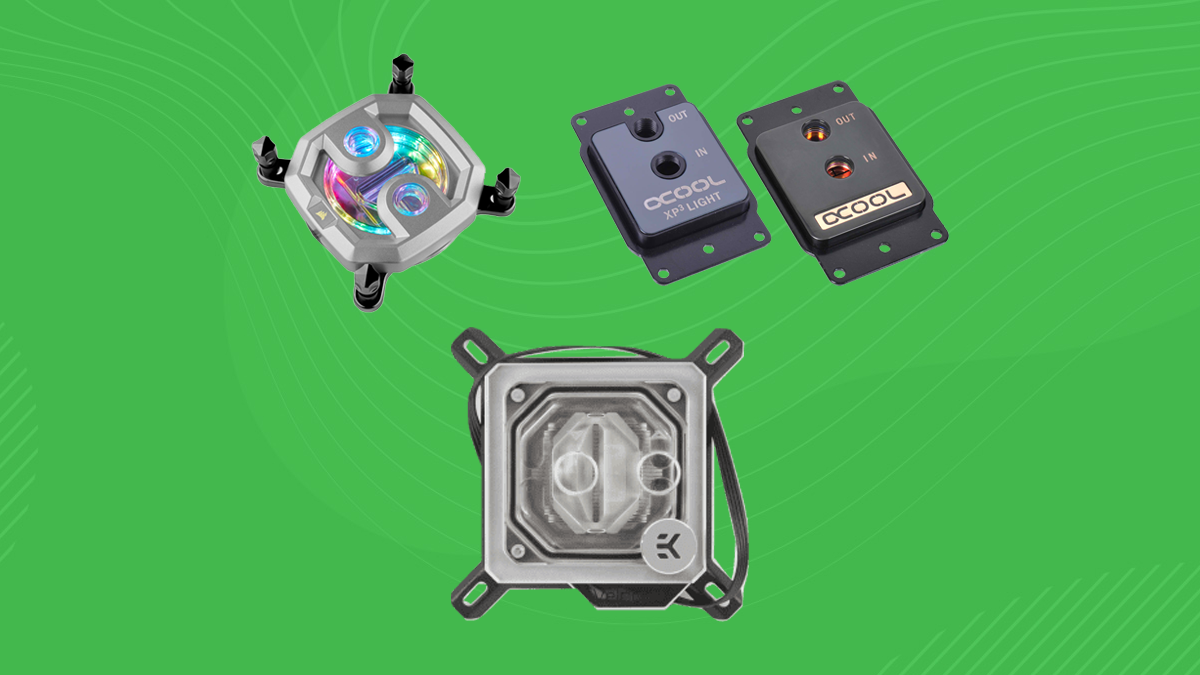 A lot of components are crucial in a custom loop. The reservoir, pump, fans, radiator, and tubing all play their respective roles here. However, you can have all the high-end equipment in the world, but if you skimp out on the CPU water block, you’re missing out. If the block can’t properly cool the processor, then what’s the point?

If you’re putting a considerable amount of money into a loop, a great CPU block should go with it. With that in mind, picking between the dozens of options is quite difficult. Fortunately, we’ve done the research for you. Here are some of the five best CPU Water Blocks you should buy in 2021.

Whether you’re new to PC gaming, or a long-time veteran, you are likely aware of Corsair’s presence. They make PC components as well as external peripherals for gaming. Their Hydro lineup consists mainly of closed-loop AIOs. However, Corsair is willing to make components for custom loops. Speaking of which, the Hydro CX7 water block looks like a resounding success.

RGB isn’t much of a surprise in a Corsair product, but it’s always nice to see. Many people build custom loops just for aesthetics, so having RGB as an option is helpful. It uses 16 individually addressable LEDs that deliver a 360-degree effect. You’ll have to connect with Corsair’s Lighting Node or Commander Pro interface.

Visually speaking, this water block is one of the most impressive ones out there. It has a transparent flow chamber that shows off the coolant. Combine that with some great lighting and your system will look incredible. If you are already in the Corsair ecosystem, you can even use the iCue software to control it.

Installation is easy, which is always a good thing. They include mounting screws and pre-applied thermal paste. Performance is also excellent, and on-par with the bigger water block makers out there. The only downside is the fact that you might need a Corsair lighting controller to fully take advantage of the RGB.

AlphaCool has been making products specifically for custom loops for some time now. The Eisblock XPX Aurora Plexi Digital is one of their most successful CPU blocks to date. They recently updated with an RGB version. The result is one of the most aesthetically pleasing CPU water blocks to ever exist. It also performs like a champ.

The updated version of the Eisblock looks much better than the original. The transparent chamber shows off the internals beautifully. It has a smooth clear finish all around, with black accents for some extra flavor. It offers efficient performance thanks to the ramp system design. Quality is also solid all around.

The water presses evenly through the diffuser plate and covers the cooling base evenly. Furthermore, the channels are larger to accommodate the larger CPU Dies. If you have a multi-core processor, this is going to be quite efficient. The cooling plate also has 81 cooling fins which promise maximum heat diffusion. It creates a large surface area, so dissipation works well.

It includes all of the mounting accessories for AMD and Intel sockets. To control the RGB, you’ll need to connect the 5V Digital RGB adapter to the unit. The other end of this cable needs to plug into the 5V 3pin addressable RGB header on your motherboard. If you don’t have space on your motherboard, you can buy an Alphacool Digital RGB controller that is sold separately.

Overall, this is a solid CPU water block that comes from a very respectable brand. The value proposition is not that bad either. The only problem is that liquid flow is a bit restricted. This doesn’t hinder performance, but some people may be bothered by this in the long-run. Thermal performance is still excellent.

Base Material: Copper | Compatibility: AMD AM4 | RGB: No

EKWB is considered to be the top enthusiast brand when it comes to water cooling components. They are specifically popular for their CPU and GPU blocks. Their Velocity series has been quite successful for the most part. So, it’s only natural that they start focusing on high-quality CPU blocks for AMD processors.

There are a lot of CPU blocks out there that work with both Intel and AMD. However, there aren’t a whole lot of companies that focus completely on the AMD side. EKWB acknowledges this and addresses it with its EK-Velocity Water Block. It’s a Copper/Plexi block, which is made of high-quality materials. It’s their high-performance flagship product for modern processors.

It still uses the same award-winning water block cooling engine. This has been tweaked for better performance and optimal flow. It doesn’t matter if you have an expensive or cheap pump, this block does a good job of letting the coolant flow easily.  Operation is almost dead silent, yet performance doesn’t take a hit in any way. The pure copper material plays a big role in this.

The polished contact surface makes better contact with the CPU. As for the top surface, it is constructed out of Plexi glass-like material. Installation is easy, and everything necessary is included in the accessories. This includes mounting screws, mounting springs, an AM4 bracket, rubber backplate gasket, and even a small tube of Hydronaut thermal paste.

Apart from that, this CPU block is quite pleasing to the eye. It doesn’t have any RGB, but the combination of copper and plexiglass looks incredible. Mix that with some white or light-colored coolant, and it’ll look very unique.  It earns a lot of points for that alone. However, since this is a premium EWKB water block, it does cost a pretty penny.

You can’t talk about water cooling components without at least mentioning Thermaltake. Since they also make cases, fans, and other components, they are a recognizable brand for the average Joe. However, the Thermaltake Pacific RGB Water Block is anything but average, far from it. It also happens to have great value for money.

Thermaltake could have slapped on their “Ring RGB” moniker on here like they do with several of their RGB products. They clearly have a design theme running through all of their modern products. This water block has a black top plate surrounded by RGB all around. A quick glance and you’ll know what we mean by the Ring RGB effect.

Of course, the RGB is addressable if you connect it to a header on your motherboard. You could also plug it into an RGB controller, which most people will do. It supports all the modern Intel and AMD sockets, and even some of the older ones. It uses a copper base with a 0.15mm internal fin construction. On top of that, it has anti-corrosive nickel plating and an easy mounting mechanism.

Thermal performance is great. You could easily overclock even a 3950X with this water block. It is also relatively quiet, which is great if you want to make a silent build. Considering the aesthetics and performance it offers, it’s a great value overall.

Unfortunately, the RGB wires are cheaply made and some people have reported that the LEDs have quality issues. Apart from that, Thermaltake’s software needs a lot of work. This is a bit disappointing if you want to control the RGB.

BXQINLENX is a brand must newcomers are usually not familiar with. This is because they are not widely promoted like the other higher-end brands out there. However, don’t let this fool you. This CPU Water Block is an incredible deal. If you are looking to get your foot in the door when it comes to watercooling, this is a great entry-level block.

This CPU block is designed for Intel CPUs only. It has a high-performance copper base which does a good job of dissipating heat away from the processor. It uses standard G 1/4″ threads, but the fittings are not included. Honestly, that’s acceptable for the low price.

It works easily with most compression fittings, which is great if you want to use it with hard tubing. The best part about this block is how small and discreet it is. It has a matte black design all around, which we are big fans of. Build quality is decent enough, but just remember that it isn’t built like a tank. Still, we’re not worried about it leaking.

Performance is quite decent for such a cheap block. We don’t recommend heavy overclocking with this, especially if you’re thinking of bumping up the voltage. Slight overclocking on low to midrange processor should be fine. It works surprisingly well, especially for the price. Another slight downside is the fact that they are no clear inlet/outlet indicators. Apart from that, this is an excellent block for the money.