Intel’s 7th generation Kaby lake processors with improvements over its predecessor, Skylake processors, were coupled up with Intel’s HD graphics of 630 as opposed to 530, improved clock speeds of 4.2 GHz at base and 4.5 GHz for boost speeds, improved thermals, support for 4K display for the folks that are looking to get the best out of a processor, and compatibility for Intel’s fastest SSDs named Optane series pushing you all the way towards a mighty fine system all around. 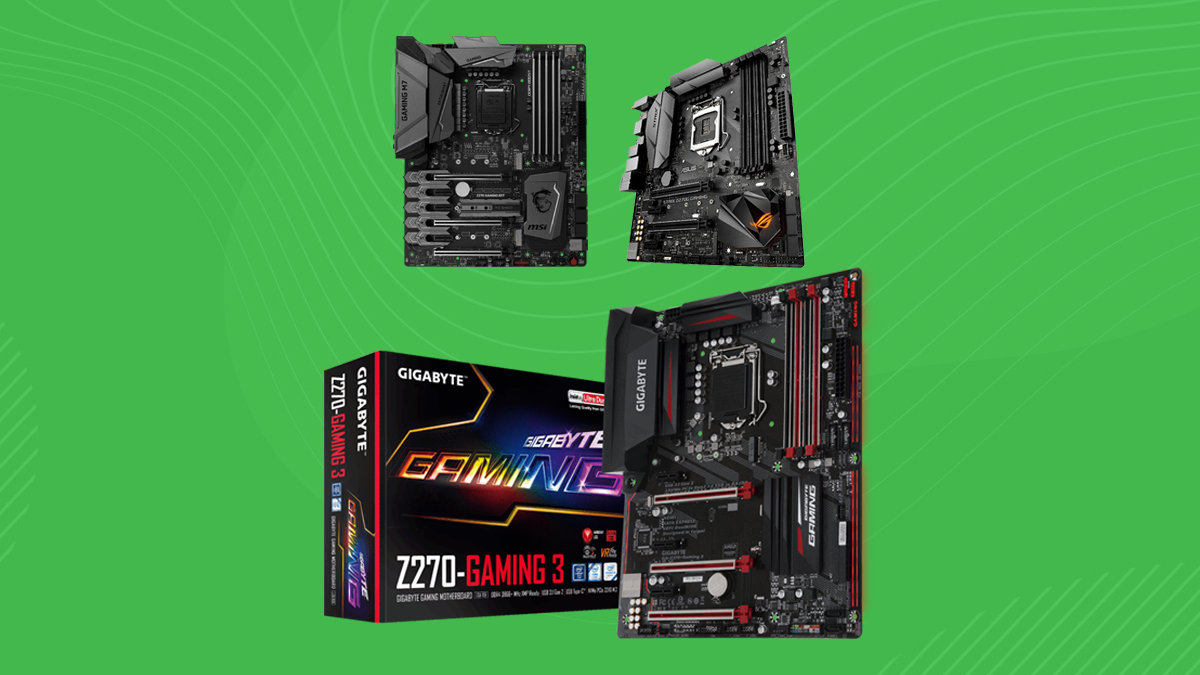 Now, what shall be your weapon of choice for these old bad boys? We obviously have to go with the compelling Z270 chipsets which are primed to enforce this processor to its maximum pegs of potential.

ASUS is yet to be dethroned from the spot of Number 1 motherboard manufacturers and they continue their onslaught with their 9th entry to the Maximus series. It is a purpose-built motherboard highly optimized for overclocking to the very extremes.

Its build is as sturdy as it can get with all-metal backplate and strong front armour to provide maximum protection and durability.  It comes with reinforced PCIe  SafeSlots, M.2 slots, USB 2.0, 3.0 and 3.1 (can do 10 GB/s), type A and C USB.  It has a 10 phase (8+2) VRM backed up by “Ek water block”, a copper-lined custom water loop running straight to water cooler, harnessing the extra cooling at overclocked speeds. Supports DDR4 RAM which runs up to 4133 MHz + (OC).

In terms of discrete graphics, it supports up to 3-way CrossFire/Quad CrossFire, Up to 2-way SLI, Quad SLI. It comes with dual-channel Wi-Fi which is great for wireless connectivity purposes.

One of the sweetest spots on this motherboard is its sublime Audio system. You can easily appreciate the all-out effort poured into the software to grant maximum clarity with their Supreme FX audio codec. Apply customized audio settings to different applications, so everything you do is perfectly tuned to the way you want to listen whether it’s your browser, game, etc everything can be fine-tuned under your grasp.

ASUS claims up to 35-degree Celsius lower VRM temperature by utilizing EK CrossChill II water block. They didn’t slack off on the aesthetics either with AURA Sync RGB lighting featuring a nearly endless spectrum of colors with the ability to synchronize effects across an ever-expanding ecosystem of AURA Sync enabled products. They’ve made overclocking super easy for the users, you can aptly overclock it to your heart’s content right out of the box without any messing and tweaking of voltages required.

This really shows that ASUS has learned from its past dicey experiences and improved its software.  There are two minor downsides observed from this board: Bluetooth stuttering and inconsistencies observed by users of Logitech keyboards which were abated by switching to a different keyboard: and the fact that it has only one USB 2.0 header, to deal with that, you can attach an internal USB hub giving three additional headers.

On a side note, users without any intent of overclocking are advised to steer clear from this board as it’ll be nothing but overkill for them. Other than that, it is the ultimate overclock monster primed for high-end gaming and there is nothing you can’t get on this.

MSI’s new gaming series motherboards encompass top-of-the-line features excelled to bring you the satisfying gaming and streaming experience. They’ve made some changes to their previous boards to refine their quality. The board comes with lightning USB 3.1 Gen 2 (doubling the bandwidth).

They’ve discarded their onboard SATA interface and replaced it with U.2 and twin-turbo M.2 modules covered by M.2 shields over them working as passive cooler and protector in order to avoid thermal throttling of M.2 SSDs. PCIe slots are steel reinforced to protect VGA cards against bending and EMI.

Their 3800 MHz + (OC) DDR4 RAM support gained a heartening adjunct by the better-isolated trace design called DDR4 boost to improve overclocking performance. This board is exclusively tested for gaming by the eSports gamers of CS GO and other online/offline games to ensure its refined gaming experience.

Furthermore, it is bundled with onboard 16 GB Intel Optane memory which is very solid for snappy performance while gaming. It has an award-winning one-click BIOS with high resolution scalable font, favourites and search function.

In terms of aesthetics, they tried to steer away from the Red and Black theme and put more focus onto the Mystic Light Sync by which you can synchronize other RGB solutions with your gaming rig and control all LEDs in one click. Moreover, this board is the best niche for VR gaming, thanks to the VR boost stationed to resolve any lane issues while gaming.

Due to obscure reasons, you can only run up to 4 cards in the PCIe slots even though there are 6 available. In a nutshell, the manufacturers went all in to coax out the ultimate gaming motherboard with in-game weapons like Game Boost, GAMING Hotkey, X-Boost. Any hot-blooded gamer should go for it by all means.

Next up in our list is yet another banger by MSI from the Gaming Pro series which comes in a more reasonable price tagging compared to the previous entry.

It stations all the exclusive MSI board features we’ve mentioned in Tomahawk OPT Boost like DDR4 boost, M.2 shield, VR ready ports, and Lightning USB 3.1 Gen 2 for that double bandwidth but this one has SATA ports available on it.

It has a steel-reinforced PCIe x16 slot and an 11 phase PWM digital power delivery system. Moving on to the memory, it has dual channel DDR4 which supports up to 3800 MHz + (OC). It has an EZ LED debug to notify you of any problems while building.

As for the cooling set up, it comes with dual heatsink design covering the MOSFETs carrying that carbon effect styling. You’ll find 6 fan headers on the board respectively. This board also carries Mystic Light and Mystic Light sync as MSI’s answer to current RGB craze.

Furthermore, it has a neat audio set characterized by Audio Boost 4 with RealTech ALC 1220 codec being used having all its components isolated by trace line for minimal interference and a warmer sound while gaming. This motherboard packs fantastic performance into a tiny footprint. Using this board with a Kaby lake 7700K will easily give you a stable OC at 4.6ghz.

Moreover, this board has preset OC functions in the BIOS for those who want more performance but don’t necessarily know how to go about it. All in all, this is a fair investment coming in at a reasonable price tagging and you’re still getting all the exclusive MSI features.

Next up in the list is a well-balanced product fired away from the Fatality series of ASRock motherboards. It emboldens the red and black theme along with its appealing RGB lights giving out that stylish outlook. Taking a look at PCIe slots, there are three x 16 and three x1 slots. Back of the x1 slots are open, so, you can use PCIe peripherals that are not necessarily x1 in these slots.

The M.2 layout on this board is cleverly designed to provide ample room for breathability regardless of where you put it. The 10+2 power phase system remarkably fulfils your overclocking needs with extra-large alloy aluminium heatsinks for MOSFETs.

It comes with four dual-channel DDR4 slots supporting up to 3800 MHz. It has a P/S 2 port and ASMedia 3.1 USB ports. You’ll be getting SLI (plus SLI bridges) and 3-way CrossFire support. It is Intel Optane ready.

This board is replete with plenty of fan headers, the CPU cooler fan is obscured so it is advised to plug it before you drop the board in the box. As for the Audio, it has an inbuilt audio solution based on Realtek ALC 1220 and it is a Sound Blaster Cinema 3 solution.

It is located at the edge of the board for maximum noise cancellation. Its UEFI-BOIS is very handy and easy to navigate. It is instantly updatable from the internet. You can disable or enable some processor cores, C-states for power management, CPU thermal throttling, USB ports, maximum multimonitor support for your onboard multiple GPUs. In terms of performance, it will hold a stable 4.8 GHz without significant heating up of VRM.

Overall, it is a very competent and affordable board which comes with all the requirements a gamer desires.

Last on the list is this flashy looking motherboard by GIGABYTE which is loaded with tons of fusion RGB and LED strips having LED overlay accents for more customization and features. It has metal-reinforced PCIe slots, dual M.2 slots, U.2 slots and many more rich connectivity options for you to utilize from. It has a 10 phase VRM backed by an impressive cooling system.

Basically, GIGABYTE has teamed up with Bitspower to create integrated hybrid VRM cooling solution which works actively and passively. And of course, it comes with dual-channel DDR4 that pegs up to 4133 MHz + (OC).  A pleasing addition to the board, Thunderbolt supported ports, for higher transfer speeds (40 Gb/s) is a definite pro. It is Intel Optane ready.

There is another stand out feature embodied by this board, USB DAC UP 2 which enables you to control voltage flow to your power-hungry peripherals. For the VR enthusiasts, it is stationed with the necessary VR set up.

It has a very queer cooling system compared to other boards on the list. With Smart Fan 5, the board has 9 temperature sensors, 2 being thermistors which can be connected to M.2 or mechanical drives.

It has 8 hybrid pin fan headers which automatically detect between voltage mode or PWM mode and they can respond/react to thermistors. Its audio system is also above the cut of an average Realtek ALC, they’ve employed Creative Sound Blaster and Creative Sound Core 3D chip making GIGABYTE one of the only manufacturers to implement a quad-core audio chip to the board directly. Gigabyte’s current mainstream BIOS firmware isn’t much changed from the one that debuted aboard the X99-Designare EX and Aorus Z270X-Gaming 5.

The company has stripped out the vast majority of fluff from its firmware in favour of a refreshingly straightforward interface that exposes most of what tweakers want to see and little else. In our opinion, overclocking on this board is best suited for experienced hands and a one-click overclock from Gigabyte’s software may not end up producing a stable or reliable result, Hence why we’re keeping it at the bottom of this list.

However, if GIGABYTE can provide a one-click solution for OC purposes, this motherboard can reach the top of this list with ease. Nonetheless, it truly lives up to its high price tag and delivers an experience that’s clearly above and beyond that of the average midrange board.