The post-apocalypse genre is incredibly overdone at this point. It’s a trend that just refuses to die, and we’ve seen countless tropes of this genre repeat themselves in various mediums. This is a genre that is popular in movies, TV shows, books, and of course, video games. However, for a genre that can get saturated this much, there sure are a lot of gems and surprises to be found.

Most of these obviously come from great narrative experiences and gameplay. And which other platform is better for that sort of thing than the PS4. It is surprising how some of the best games happen to be based on the post-apocalypse concept. From indie games such as Nuclear Throne to long-running franchises like the Fallout series.

Be it an infected zombie outbreak, or the wastelands of a post-nuclear world, these stories tend to be quite interesting. That is despite all of the cliches and tropes that repeat themselves again and again. With all of that said, here are five of our favorite post-apocalyptic games on the PS4. N 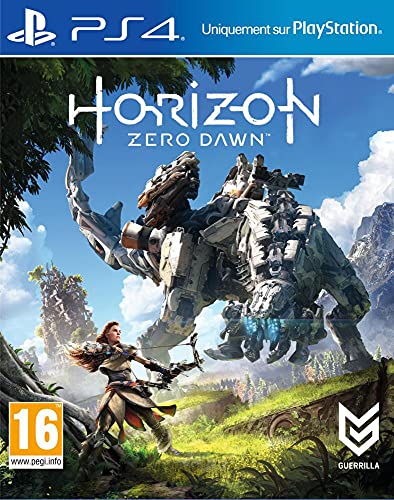 While Horizon Zero Dawn isn’t exactly underrated, it doesn’t get the same appreciation that other PS4 exclusive do. Some of the best games on the PS4 are God Of War (2018), Uncharted 4, and Days Gone. Horizon Zero Dawn is absolutely on par with those games. Especially if you are a fan of open-world games. This game was also released on PC, and we are expecting a sequel to be released this year.

It follows the story of an orphan named Aloy and is set several years after a cataclysmic event led to the apocalypse. Aloy has been living as an outcast with her step-father but now that she is of age, she sets out on a path of self-discovery. Through her story, you will come to understand how the world came to an end and be a part of rebuilding a new civilization.

But Aloy’s journey is not a smooth one. She will have to battle both man and machine before completing her quest. Speaking of which these robotic monsters form a critical part in beautifying this game. Humans have gone back to the medieval age of living where they rely on crude weapons and seeing robot machines exist in this kind of environment is fascinating.

This is the sort of dynamic that we have not seen before. The characters look like they belong in a prehistoric era, while the mechanic monsters emphasize that this is a post-apocalyptic game. Horizon Zero Dawn is unique in this regard, and it’s a setting that translates perfectly to an open-world game. The world here is quite small, but Guerilla Games went for quality over quantity. Even the sidequests are engaging.

However, the best part is arguably the combat. Simply put, it’s a lot of fun when you have to take on giant machines with a bow and arrow. While it’s a bit farfetched, that’s what makes it so challenging. As usual, the narrative experience is excellent. All Sony exclusives seem to have great cinematic cutscenes, and this game is no different. Overall, Horizon Zero Dawn is an excellent game and we’re excited for the sequel. 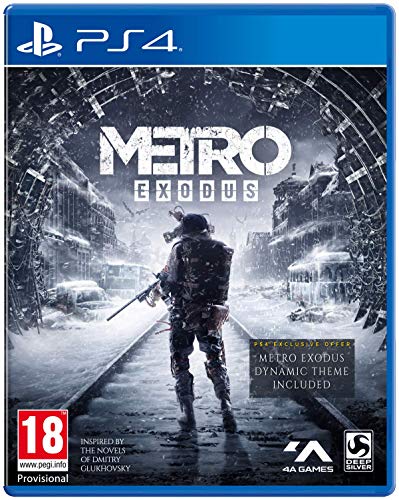 Metro is quite a popular FPS shooter series and anybody who has played the preceding two installments has been eagerly anticipating this third edition. And if you are a first-time player then it’s about time you join the wagon. Fortunately, you won’t miss anything since the story in Exodus is self-sufficient.

Okay, maybe there is something you will miss. The underground tunnels in which the previous games are set. But what you get is better since this new installment takes the action above ground.

The game is set in post-apocalyptic Russia that died after a nuclear war. In the game, you play as Artyom who together with his wife Ana and a crew of Spartan rangers are escaping the ash-ridden Moscow Metro aboard a train called Aurora. Their destination is the far east where they hope to find a new life.

The train will make several stops in the course of the journey to allow you to collect supplies and explore the open world but it is also in itself an important part of the game. It makes for some great bonding moments between the travelers. You will also love how much attention the game developers put into crafting each environment in the game. The dynamic weather, atmosphere, and environment give the game a certain kind of realness that is hard to miss. Every new area gives you a new experience.

Metro Exodus retains much of the combat style that is dominant in the Metro series. A lot of shooting and the occasional stealth mode approach. You will have the most fun upgrading your weapons to exert maximum damage to the mutated creatures and human enemies that you will be facing.

The new mutant types in the games called “hum-animals”, pose a new challenge to the gamer as they attack furiously and come in packs. While this game is quite different from the previous two entries, it’s a change in dynamic that many fans adore. All of the metro games are special, and this one is no different.

No one should be surprised to see this game on the list. It is a sequel to the excellent masterpiece from Naughty Dog. While the original Last Of Us focused on the relationship between Joel and Ellie, this one takes a different route. It is dark, gritty, and extremely distressing. The story is something that will haunt you long after it’s finished. That’s a feat not many game studios can accomplish.

However, the narrative goes in a very different route than what everyone expected. This is why there is so much noise online. The story is polarizing, some people love it, and others don’t. That doesn’t mean the game is bad, in fact, that is what makes it excellent. It’s a story you should experience for yourself and see what you think of it. The writing is excellent, it’s just the narrative choices that are polarizing.

Ellie is a very different character compared to the original game. That’s only natural, she is all grown-up as an angsty teenager. After a horrific event, she sets out to take revenge. Speaking of which, what a bloody, violent, and ruthless revenge path that is. The Last Of Us Part II does not pull any punches, as it is constantly in your face. The encounters with zombies and even other human enemies are nerve-wracking.

The combat here is phenomenal. It does not bring anything new to the table but explores a lot of options. Stealth is decent on its own, and so are the gunfights. Combine both of these things, sprinkle in a bit of concealed traps, and some eerie zombies. That’s truly a frightening experience. Even the hand-to-hand combat feels weighted and solid. No complaints in the gameplay department.

Other than that, the visuals are incredible. There’s chatter about this getting a remaster for the PS5, which does not make much sense right now. Simply put, the Last Of Us Part II is on another level of graphical fidelity. It even looks great on the original base PS4. However, play it on a PS4 Pro with a 4K TV and you’re in for an unforgettable 25 hours. 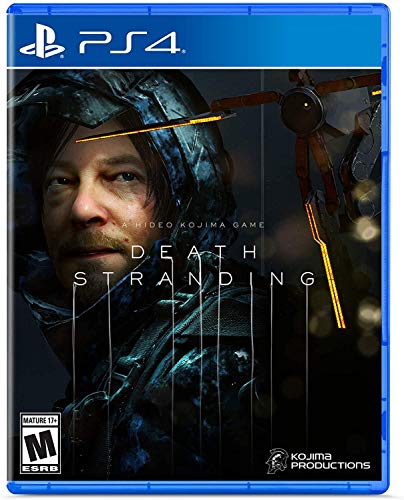 It doesn’t matter if you are a video game fanatic or just a casual player. You have probably heard the name of Hideo Kojima uttered a dozen times before. He is the great mind behind the Metal Gear Solid series and the Silent Hill series. When Kojima announced his departure from Konami and told us that he’d be making a game where he could express him fully, the fans were excited.

The result is Death Stranding. A game with which a lot of people have a love/hate relationship. But clearly, I liked most of the game and that is exactly why it earns a spot on this list. This game is very divisive and for good reason. However, it’s hard to overlook the quality and amount of intellect put into this game.

You play as Sam Bridges, who works as a Porter in this game. Now if you don’t know what that means, I’ll put it simply: Yes, you basically deliver packages. Sam even says it so himself: “I make deliveries. That’s all”. However, a lot of people are being a bit ignorant about this game. The world is all but destroyed, and your role is to try to connect society back together. I’m being vague with the story because I think you should understand it on your own to enjoy it.

First off, the graphics are phenomenal. Easily the best I’ve seen on PS4 so far. The world-building here is absolutely gorgeous, the enemies are known as “BTs” and the bosses you encounter throughout the game are terrifying yet beautiful in a dreadful sort of way. My personal favorite part was the soundtrack, which I still listen to all the time. The story here is gripping, the complexities woven by Kojima are quite mind-numbing at times.

Kojima definitely has a lot to say in this game. But even though I personally found the simple walking and shooting elements relaxing, it’s not everyone’s cup of tea, which is completely fine. It’s not a game for everyone, but if it does interest you, you will absolutely love this game. 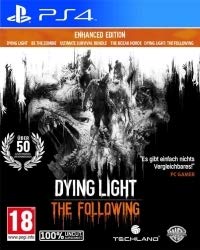 As mentioned in the intro, post-apocalyptic games have gotten a bit stale over the years. Of course, we’re featuring the cream of the crop here, but there is a lot of generic stuff out there. Well, Dying Light is anything but generic. In fact, it’s the most fun I’ve had in a video game for quite some time. Since the sequel is coming out sooner rather than later, let’s talk about the excellent original.

Dying light takes place in the city of Harran. An unexplainable virus outbreak takes place and turns most of the population into zombie-like creatures. You take on the role of Kyle Crane who plays an undercover operative for the Global Relief Effort. Your job is to extract a file from a man called Rais. You do this while running away from zombies, climbing rooftops, and with little to no guns. Good luck.

The best part about Dying Light isn’t the story, but the gameplay. There’s no doubt that this is a very special game, inspired by a few classics. Playing it for the first time feels like you are playing Mirror’s Edge with zombies. Mirror’s Edge is a timeless classic, and Dying Light looks like it’s going to end with the same fate. You run around the city escaping zombies all the time. You can’t take them head-on, as your melee weapons can easily break. There aren’t a lot of guns around either.

This game takes melee combat, parkour, verticality, and blends them together beautifully. You spend a lot of time on rooftops and tall buildings. This creates a sense of verticality, and it’s also the only way to escape most zombies. The expansion DLC, known as “The Following” takes things to another level. It has a newer city in an open-world type scenario. It also adds a buggy for you to travel around areas quickly.

If you buy the version we’ve listed above, you get the original game and The Following expansion in an enhanced collection. This is the true way to fully experience the game. This game was released in 2015, yet still holds a lot of value for anyone who loves the survival horror style of games.