Several Windows users have been reaching us with questions after they brought the Metro Exodus game from Steam and are unable to play it. Most affected users are reporting that the game crashes with the “FATAL: Metro Exodus – A crash has been detected by BugTrap” immediately after the initial loading screen. The vast majority of users that are encountering this issue are well over the minimum system requirements when it comes to their system hardware. The issue is not exclusive to Windows 10 as it’s also encountered on Windows 7 and Windows 8. 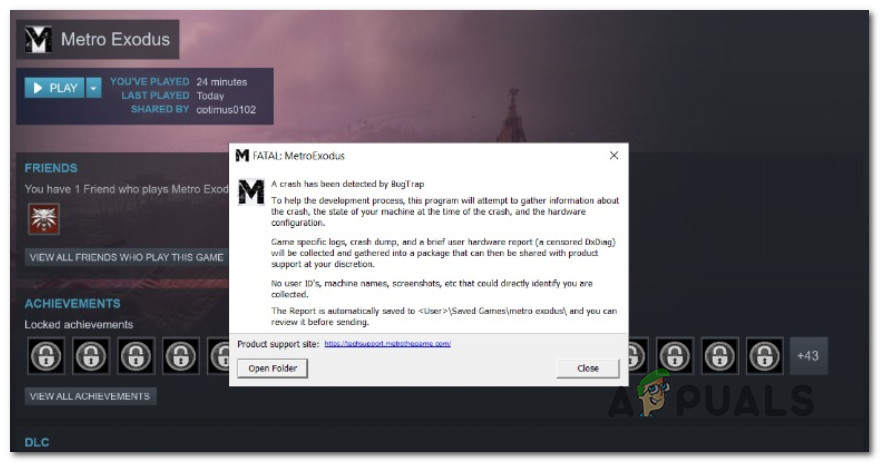 We investigated this particular issue by looking at various user reports and by trying out the different repair strategies that are recommended by other affected users that also encountered this problem. As it turns out, several different scenarios might lead to the apparition of this issue. Here are several culprits that might be responsible for this error message:

If you’re currently encountering this issue and you’re looking for a fix capable of allowing you to play Metro Exodus without interruption, this article will point you towards several different troubleshooting strategies. Down below, you’ll find instructions to several repair strategies that other affected users have successfully used to resolve the “FATAL: Metro Exodus – A crash has been detected by BugTrap”

To remain as efficient as possible, we advise you to follow the potential fixes below in the same order that we ordered them in (via efficiency and difficulty). Eventually, you should stumble upon a fix that will be effective in resolving the issue according to the scenario in which you’re encountering the issue in.

As it turns out, one culprit that might trigger this particular crash is an inconsistency with the game files of Metro Exodus. Several affected users that were also struggling to resolve this error message have reported that the issue was resolved after they verified the integrity of the file cache via the Steam Menu.

This will not apply to every user since you can only follow the instructions below if you got the game via Steam. If you purchased the game from Epic store, skip directly to the next method below.

Here’s a quick guide on verifying the file cache integrity of Metro Exodus:

If you’re still encountering the “FATAL: Metro Exodus – A crash has been detected by BugTrap” error, move down to the next method below.

As it turns out, this particular issue can occur due to an inconsistency having to do with some intro callers that are crashing the game whenever the intro screen, the credit or the legal agreement screens are displayed. Upon investigating the issue, it turns out that this particular issue only occurs with Nvidia GPUs with users that are actively using Ansel as the default way to record in-game footage.

Several affected users that were also encountering this issue have reported that the issue was resolved once they removed 3 files from the main game folder (credits.webm, intro.webm and legal.webm) and disable the NVCamera of Nvidia Ansel.

If this scenario is applicable (you’re using Answer with an Nvidia GPU when encountering the error), follow the instructions below to remove the 3 intro callers causing the issue and disable the NVCameraCOnfiguration:

Note: Keep in mind that this fix will allow you to play Metro Exodus while recording the gameplay with Ansel. But if you’re looking to eliminate the conflict, you can simply uninstall Ansel and migrate to a similar utility that supports Nvidia GPUs.

If you’re still encountering the “FATAL: Metro Exodus – A crash has been detected by BugTrap” the error a short time after you launch the game, move down to the next method below.

As a lot of affected users are reporting, this particular issue is often confirmed to occur due to an inconsistency having to do with DirectX 12. The developers of Metro Exodus have patched this problem several times now, but some users are still encountering these types of crashes with certain PC configurations.

This problem is typically reported to occur on PCs that use two GPUs (SLI or CrossFire).

Sure, there will be a downgrade in graphics since you won’t be able to use the latest lighting technology, but at least you’ll be able to play the game.

If this scenario is applicable, here’s a quick guide on adjusting the game settings so that it uses DirectX 11 instead of DirectX 12:

As several affected users are reporting, this particular issue can also occur due to an overlay issue caused by GeForce Experience. According to various user reports, you might experience the “FATAL: Metro Exodus – A crash has been detected by BugTrap” error due to the fact that Metro Exodus doesn’t play well with applications that insist on having overlays on the screen -which GeForce Experience insists on doing.

If you’re using GeForce Experience, chances are you will be able to resolve the issue by uninstalling the utility using Programs and Features. Here’s a quick guide on doing this:

In the event that the “FATAL: Metro Exodus – A crash has been detected by BugTrap” error is still occurring, move down to the next method below.

If you’re using a mouse that is actively using the Roccat driver, it’s very likely that the startup crash you’re encountering when trying to play Metro Exodus is caused by a driver inconsistency.

Several Windows 10 users that we’re encountering the “FATAL: Metro Exodus – A crash has been detected by BugTrap” error have reported that they managed to get it resolved by using the Settings menu to uninstall the Roccat mouse driver. As it turns out, the generic drivers that will be used instead will not produce the same error message.