The X470 chipset is not the most feature-rich and up-to-date chipset currently available for AMD, but in 2021 it does offer an excellent value option due to its age. Although the X470 chipset is missing some key new features such as PCIe Gen 4 support, it does offer almost all the other features that one might expect to find in a high-end motherboard chipset. Thanks to its market placement, most of the X470 motherboard options contain excellent VRM designs that can handle even overclocked modern CPUs quite easily. 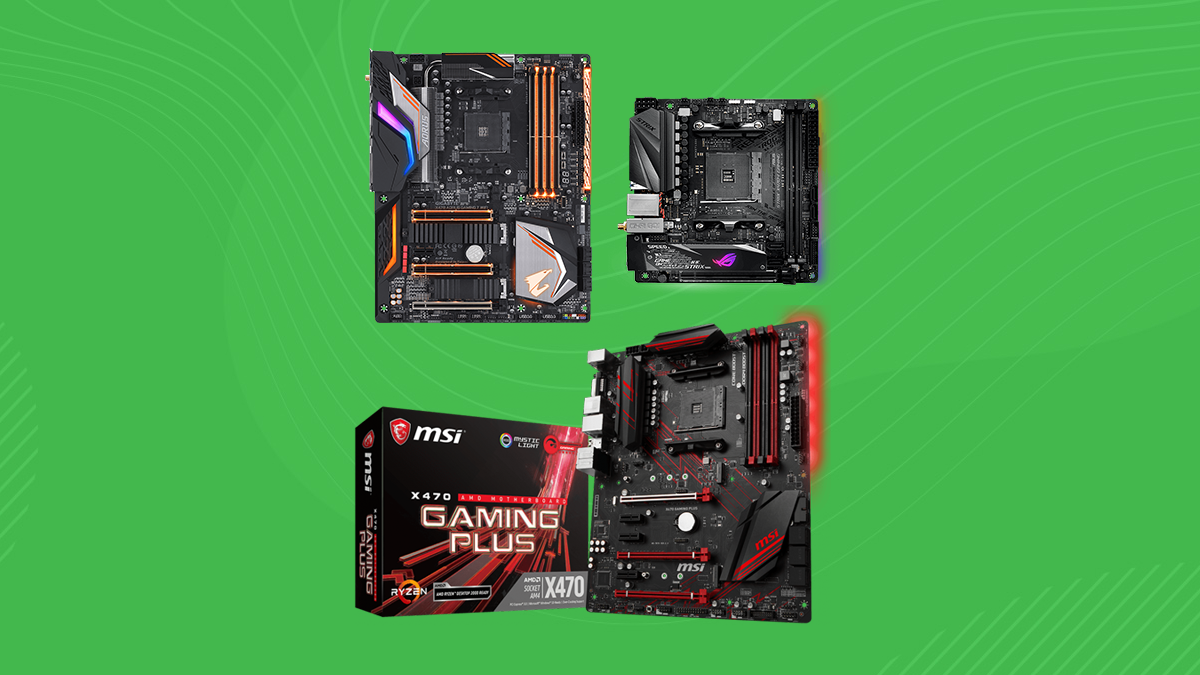 Having robust VRMs is not the only thing that differentiates an X470 option from a budget-oriented B450 one. X470 motherboards support higher RAM frequencies and also have excellent cooling systems over their VRMs and chipsets, therefore making them ideal for CPUs with more core counts. In addition to all of these features, the X470 motherboards are quite a bit cheaper than their X570 counterparts due to age, and can thus offer some pretty stellar value.

Our Selection Of The Best X470 Motherboards

The Crosshair series from ASUS has been their high-end motherboard series for quite a while now when it comes to AMD, and it always aims to deliver some premium products. The ASUS ROG Crosshair VII Hero continues this trend with the X470 chipset and packs some amazing features, even by 2021 standards.

Coming to the VRM of the motherboard, there is no doubt that the X470 Crosshair Hero is well-equipped in this area. It has an incredibly robust power delivery system that can provide clean and stable current to even the most power-hungry of Ryzen processors. This configuration makes it an ideal motherboard for overclocking enthusiasts, as the solid VRM can allow the processors to hit high boost clocks in a more stable fashion.

The Crosshair VII Hero is also well-equipped with various features. Firstly, it has 4 DIMM slots that can support up to 64GB of RAM clocked as high as 3466 MHz. It has two M.2 slots that are wired directly to the CPU which can be used to install high-speed NVMe drives for storage. Connectivity is handled by the Gigabit Ethernet, Wi-Fi, Bluetooth 4.2, as well as a whole host of USB-A and Type-C ports. The board also has “Clear CMOS” and “BIOS Flashback” buttons, which are highly appreciated.

In terms of aesthetics, the ASUS Crosshair VII Hero stands out from the crowd. It has a very aggressive, gamer-y look that is the trademark of the ROG brand at this point. There is a generous helping of RGB lighting as well which is present mainly on the I/O cover and the chipset heatsink. The RGB can be configured using ASUS Aura Sync software to give the board a personalized look, which is a nice touch.

Overall, the ASUS ROG Crosshair VII Hero is a premium X470 motherboard that is aimed at extreme performance numbers. It may be an expensive option, but its excellent power delivery and versatile features make it seem worth the investment.

The AORUS line has provided some excellent offerings in recent years for both AMD and Intel chipsets, and the X470 chipset is definitely no exception. Our pick is the Gigabyte AORUS Ultra Gaming 7, which is a reasonably high-end board from the X470 AORUS lineup. Not only does it have excellent power delivery for the CPU, but it also has excellent features and some pretty unique design elements.

The focus for the AORUS Ultra Gaming 7 seems to be the enthusiast crowd who love to overclock their processors manually. Gigabyte has packed a strong 10+2 phase VRM design in the AORUS Ultra Gaming 7, which makes it a pretty powerful motherboard for overclocking. This board would be best paired with a high-end Ryzen 7 or Ryzen 9 processor from AMD’s Zen or Zen+ generations.

The AORUS Ultra Gaming 7 does not disappoint in the features department as well. The two M.2 slots are covered with metal heatsinks that do have a fin-design so they are more effective than normal heat-spreaders. Connectivity-wise, the board takes advantage of the Gigabit Ethernet, Wi-Fi, and Bluetooth 5.0 capabilities.

Gigabyte has opted for an aggressive design language with this board and they have clearly focused a lot of their attention towards the aesthetics of this board. There is a healthy helping of permanent orange accents on the board that might clash with many themed PC builds so that is something to keep in mind before making a purchase decision. The RGB implementation is tasteful and is concentrated mostly on the I/O cover, which looks very nice.

If you want a high-end X470 motherboard that focuses mostly on overclocking and aesthetics, then the Gigabyte AORUS Ultra Gaming 7 seems to fit the bill quite nicely. It does demand a hefty premium, but the value proposition seems good enough to justify the purchase.

Moving on to a more reasonable option, we have the MSI Gaming Plus X470 motherboard which is a mid-range offering from MSI’s lineup. Despite being a value-oriented motherboard, it offers excellent VRM power delivery and thermal performance which makes it ideal for overclockers on a budget.

One of the biggest strong points of the MSI Gaming Plus X470 is its above-average power delivery for the CPU. While it is a mid-range offering, the board can easily handle high core-count CPUs such as the AMD Ryzen 7 2700X, even at overclocked settings. This is an excellent prospect especially at this competitive price point and can be an excellent value for those looking to maximize their bang-for-the-buck. Apart from the VRM design, however, the MSI Gaming Plus X470 has had to cut some corners to accommodate the fall in price.

The board does have two M.2 slots for NVMe drives but lacks M.2 heatsinks for their thermal management. The lower M.2 runs at PCIe Gen 2 speeds due to bandwidth limitations, which is another downside of this board. It also lacks premium features such as wireless networking and USB-C ports, but that is to be expected due to the price point. Even in terms of aesthetics, the board fails to leave a good impression as it is filled with red accents that might clash with themed builds, with questionable RGB placement.

Therefore, all in all, the MSI Gaming Plus X470 is a decent option if you are looking for a performance-focused motherboard on a tight budget. It lacks some bells and whistles of the more premium offerings, but that might be forgiven given the price point.

The X470-F is a decent performer when it comes to VRM power delivery and its thermal management. The power delivery system itself is decent enough for overclocking the Ryzen 5 and Ryzen 7 CPUs from AMD’s Zen and Zen+ generations, but we would advise against overclocking any Zen 2 Ryzen 9 parts on the X470-F. Adequate VRM heatsinks are also provided, but the board often hits uncomfortably warm temperatures when prolonged synthetic loads are applied. Still, the performance is more than satisfactory.

The Strix X470-F has some decent features too, especially considering the price point. It does have two M.2 slots for storage which are covered by adequate metal heatsinks. The board also features Gigabit LAN, numerous high-speed USB ports, 3-pin and 4-pin RGB headers, and a built-in I/O shield. As far as looks go, it is quite an attractive option from ASUS. There is an aggressive design on the chipset heatsink, while the I/O cover features a subtle, streamlined RGB implementation which looks very impressive.

Overall, the ASUS Strix X470-F definitely does not hold a candle to some of the more premium offerings on this list, but it does cover all the necessary bases quite adequately. If the Strix X470-F is the best board that falls in the budget, there is no reason why you should not seal the deal.

ASUS Prime series is the budget lineup of motherboards from ASUS, but it does include some good candidates every now and then. One of the finest Prime boards is the ASUS Prime X470-Pro which is an excellent value considering its affordable price tag and host of features.

While the ASUS Prime X470-Pro certainly does not compare to the more premium boards from the Strix and Crosshair series in terms of power delivery, its 10-phase VRM design is quite robust considering the price. It should be able to handle any Ryzen 5 or even older Ryzen 7 processors under moderate overclocks without any problems. One should, however, avoid pairing this board with newer Ryzen 9 parts from recent years.

In addition to the above-average power delivery system, the Prime X470-Pro does offer some good features as well. It has some really hefty VRM heatsinks which help tremendously in the thermal management of the power delivery system. An adequate M.2 heatsink is also provided which extends to become the unified chipset heatsink as well. The number of USB ports is not that impressive, however, and the board lacks any wireless connectivity as well.

Aesthetically, this is one of the most impressive X470 boards on the market with its unique white design language and tasteful RGB implementation. The RGB over the chipset heatsink pairs really nicely with the overall white color of the heatsinks and the white stripes on the PCB itself. This is the X470 board to buy if you want to make it the centerpiece of a white-themed PC build.

While the ASUS Prime X470-Pro might not be topping the charts in terms of performance or features any time soon, it performs really well considering its budget status in the ASUS lineup. If you are on a really tight budget for an X470 board, then the X470-Pro is one to consider as well.

What makes a motherboard good?

Yes, X470 boards represent the upper tier of the 400 series chipsets. B450 boards are more budget-oriented than X470 boards, and therefore, cut some corners to reduce costs.

Yes, there are many reasons why one would want to buy an X470 board in 2021. If you want to save some money on the motherboard by going with a 400 series chipset for your CPU, but don’t quite like the compromises of B450, then the X470 chipset is the perfect choice for you.

Which brand’s motherboards are the most reliable?

One should always prefer particular products over brand loyalty. Every brand makes good and bad products, and generally, it is best practice to check the reviews of the motherboards beforehand, in order to make an informed purchase decision.