AMD released the B450 chipset as a less pricey alternative to the X470 chipset. While AMD did not provide as many features and hardcore performance levels in the B450 that the X470 gives, it is still not far behind. The X470 chipset is better for people looking to max out on the performance and get the most out of their setups. However, the B450 is not bad at all in performance. Although it does not quite match the X470 in sheer performance the B450 is at a significantly lower cost than the X470. 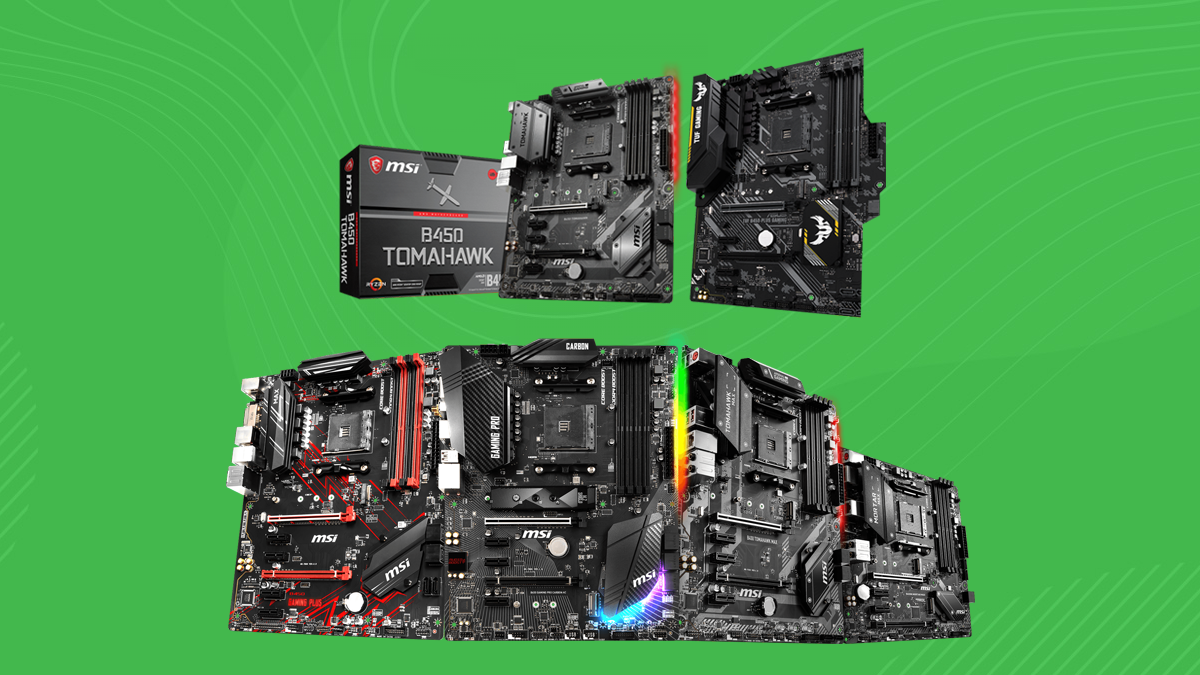 Note: If you are going to use a Ryzen 5000 series processor, remember that you’ll need to update the BIOS for B450 motherboards to work. Some boards have a button that you can use to flash the BIOS. Others require you to have a Ryzen 3000 or Ryzen 2000 processor. Some manufacturers might come out with revisions of these boards for Zen 3. Keep this in mind.

For gaming enthusiasts, the B450 will be a great pick. The B450 makes for an affordable chipset that is able to give out performance much higher than its price range. For low budget PC enthusiasts, this is a dream buy. Even if you are not on a tight budget, the money you save on this motherboard can be used to buy a better GPU or SSD. Given below are five of the best B450 motherboards worth buying in 2021.

MSI is one of the biggest players in the motherboard category in the world. MSI has been making top-level motherboards for a long time now. As such it was no surprise that we find ourselves with an MSI motherboard to top the chart. The MSI B450 Gaming Pro Carbon AC is the best B450 motherboard at this time for a wide variety of reasons, Not the least of which is the number of features it gives at a relatively competitive price. Before we get down to brass tacks let us look over the layout of the B450 Pro Carbon AC.

The B450 Gaming Pro Carbon AC has four DDR4 DIMM slots on the top right side. On the same side, there is the MSI Mystic Light RGB zone. Coming downwards on the right-hand side we see the second Mystic Light RGB zone. A little down from the center we are greeted by the PCIe expansion slots. There are a total of two PCIe X16 slots and three PCIe X1 slots. This is lower than what we see in many motherboards these days. Three PCIe X16 slots have become pretty much standard nowadays. The USB ports offered on the back panel are also not the highest in number. There are 6 USB ports on the back panel, whereas we see many other b450 chipset motherboards providing more USB slots.

All in all, we cannot begrudge MSI too much for not giving a ton of connectivity options as they have given some other features that are quite hard to match. The Pro Carbon AC has Bluetooth as well as WIFI connectivity. There is a ton of software for different purposes that can be used to get the best out of this motherboard. For example, there is software for cooling, software for performance, a rather in-depth software for RGB functions, and getting the RGB of different products in sync with each other. There is also a nice UEFI interface. Overall, just a very comprehensive software and UEFI network to help improve user experience.

As you know cooling is very important for a motherboard to perform at its finest. A good cooling system allows your motherboard to perform significantly better than a poor cooling system would. The MSI B450 Pro Carbon AC has an effective cooling system with heatsinks, fans, and fan headers along with compatibility with water cooling, etc. Now we know this is a top-level motherboard. It is one of the best motherboards of its particular type, so you would expect a high price. The pricing is not the lowest, but it is definitely not high either. It is as a matter of fact very competitive in today’s market.

ASUS is pretty much a household name when it comes to computer hardware products, especially motherboards. ASUS makes a ton of different gaming and computer-related hardware items but it is clear where the real brilliance lies. They have made some of the best and most iconic motherboards over the years. The ASUS ROG Strix B450 F attempts to reach the same level of brilliance as its predecessors. One noticeable thing about the ROG Strix B450 F is that there are more connectivity options on this board than the MSI Pro Carbon AC that has taken the number one spot on our list.

One thing to like about the ASUS ROG Strix B450 F is the low amount of RGB. Most motherboards these days are flashy and bright with RGB. Not everyone is a fan of such bold and flashy lighting motherboards and may just want to keep a low-key and sleek setup. This board definitely keeps that in mind as the only RGB zone is on the rear USB panel shield in the ASUS logo. There is a light that can be turned on or off on the heatsink. RGB lovers rest assured, there are RGB headers that you can connect RGB strips to and sync with the famed ASUS Aura RGB. As far as looks go, this board gets a big plus in design and aesthetics.

There are three PCIe X16 slots and 3 PCIe X1 slots in the B450 F. A total of either USB ports are present on the back panel. With the proper AMD Ryzen setup, you can get up to eight SATA slots and two M.2 sockets. As you can see, this is much more in the way of connectivity than the MSI board offers. There is, however, a noticeable lack of a WIFI and Bluetooth availability on this board. There is also no M.2 dedicated heatsink.

As far as overclocking experience goes, there are not many – if indeed any at all – B450 motherboards that can top the ROG Strix B450 F appreciatively. The Gigabyte B450 Aorus Pro WIFI gets a very negligible victory in overclocking over the ROG B450 F. The ROG Strix will eat up a good chunk of power though. One of the key features of a motherboard that often goes unnoticed is the audio quality. It is safe to say that the ROG Strix gives you much more than required with the SupremeFX audio and a couple of other Audio enhancing features of ASUS.

The B450 Aorus Pro WIFI has a couple of M.2 connectors with thermal guards or shields. The Aorus Pro has up to four DDR4 DIMM slots and three PCIe X16 slots as well. There are a total of six USB slots on the back panel. There is WIFI and Bluetooth connectivity as well as an ethernet connection port, along with a couple of video ports like DVI-D and HDMI on the back panel make up the external connection options. All in all, a decent amount of connectivity options. There are three onboard RGB Fusion lighting zones in the Aorus Pro WIFI. The Aorus name on the back panel, the Gigabyte Aorus logo on the heatsink near the M.2 Socket, and there are a couple of RGB lines near the audio capacitors and the audio guard.

The black and silver color scheme along with the Aorus logos and the RGB zones make for a really nice-looking motherboard as a whole. Not to mention, the Aorus Pro WIFI looks uncluttered and has efficient usage of space to add to its attractiveness. The Aorus Pro WIFI is kitted out with a bunch of cooling options and features. Performance is good and power-efficient for the most part. The B450 Aorus is able to hang with the best of them. The only problem we see is when it is put under heavy load. The Aorus tends to eat a lot more power under load.

If you intend to be putting your Aorus Pro WIFI under heavy load, you need to make sure you have a good cooling setup installed. The overclocking on this motherboard is not the best. It is decent and adequate for the price point. If you want to push your board to the limit and overclock it constantly, the B450 Aorus Pro WIFI may not be the best option. For most standard or casual users, however, the B450 Aorus Pro WIFI is a very highly rated pick.

Micro ATX motherboards naturally have lower space due to the smaller size. Due to this, they have a lower number of features especially in connectivity due to lower space. There are only two PCIe X16 slots and one PCIe X1 slot. As you can see, much lower connectivity options. What is really interesting is the eight USB slots on the back panel. Either USB slots on the back panel are more than even some of the full-size motherboards bother to give out. There are also two M.2 connectors.

There is a cut down on the number of SATA slots. You get only four SATA slots. This is not too big on future-proofing as you might run into a low number of SATA slots when you are looking to make upgrades. Another plus in connectivity is the three different video ports options you have available on the back panel. To make it even better, you can have all of the three ports plugged in and giving a display to three different screens simultaneously.

The downside of the B450M Pro 4 comes in design and aesthetics. It is rather bland and plain when it comes to style. There is the option for AMD Crossfire capability but there is no SLI available in this motherboard. The price point is also a big plus for the ASRock motherboard. It is significantly less expensive than the higher-end B450 motherboards.

The Mini ITX form factor motherboards are not seen too often. Still, the ASUS ROG Strix B450 I mini ITX motherboard is the best motherboard you can go for if you are running low on space. This is extremely low space requiring as you can see from the less than 7-inch dimensions. What is truly interesting is the number of features that ASUS has managed to fit into such a small space.

The back panel is not the most populated, as expected from such a small board. A couple of DDR4 DIMM slots are present that can go up to 64 GB worth of memory. There are only six USB ports and one HDMI port. There is the ethernet cable slot and the B450 I does have WIFI as well as Bluetooth compatibility. Four SATA and a couple of M.2 sockets with a single PCIe X16 expansion slot make up the connectivity options of the ROG Strix B450 I. As you can see, there is not much in the way of connectivity but that is to be expected from such a small-sized board.

Design-wise, this board is very good. As such, aesthetic value is one of its strong points. The board is all black with ASUS Aura RGB on the right side. The VRM placements and layout is impressive. The VRM is a big plus for the ROG Strix B450 I. In overclocking, the VRM’s perform adequately to maximize power efficiency. The audio is also really nice.

This board is relatively expensive though. So, you look at ASRock’s B450M Pro 4, it is at a much lower price range than the ASUS B450 I. In the small size motherboard department, ASRock’s product will definitely reign supreme over this motherboard due to it having more features as well as a lower price. However, if you are looking for an even smaller motherboard than a micro ATX, then ASUS’S mini ITX B450-I is the best you can find.

Ace Luke
Ace Luke is a Washington Accord certified computer engineer with a keen interest in gaming and reviewing computer hardware since childhood.
Trending
Close