There is no way to deny that gone are the days when mechanical keyboards were considered luxury and the only company that were making mechanical switches was Cherry MX. Literally every other keyboard brand had Cherry MX switches in them, and the thing was that they were all pretty expensive. However, the moment Cherry’s patents expired, there was a plethora of 3rd party switches available in the market, and while some were really good, we also saw some really terrible ones, too.

This was around the same time when Razer was establishing itself as the up and coming creator of some of the finest peripherals in the market, and in all honesty, the company did succeed in that, as well. Because today, Razer happens to be one of the most prominent peripheral makers in the market. However, Razer’s quest to provide good mechanical keyboards was not an easy one; you see, the company first struggled to make their own so they decided to rely on Chinese manufacturers. Why? Well, it was not Razer’s fault. Corsair and Cherry had a deal that the only Corsair will be getting the RGB mechanical switches, which made every other company go for switches that were not from industry-standard Cherry.

However, those switches that Razer co-developed had some issues, so they started working on bringing something different to the table. This is where the amazing Razer opto-mechanical switches come in to place. These switches are completely in-house, and when it comes to setting standards, they are definitely up to the mark, and they are gaining a lot of traction.

We recently reviewed the Razer Hunstman Elite, the keyboard is one of two keyboards to use the opto-mechanical switches and we have to say, we are nothing short of impressed.

As a matter of fact, if you do want to buy a good keyboard, you should definitely check out our review of the Razer Huntsman Elite that we did; the keyboard comes with the opto-mechanical switches and is definitely one beautiful looking keyboard.

For now, however, we want to draw a comparison between Razer’s opto-mechanical switches and the Cherry MX switches to see which one comes out at the top. In order to make things proper, we are going to take a look at the mechanism, keycap support, variations, and durability. All these things are definitely going to help you decide which switch you should be going with. 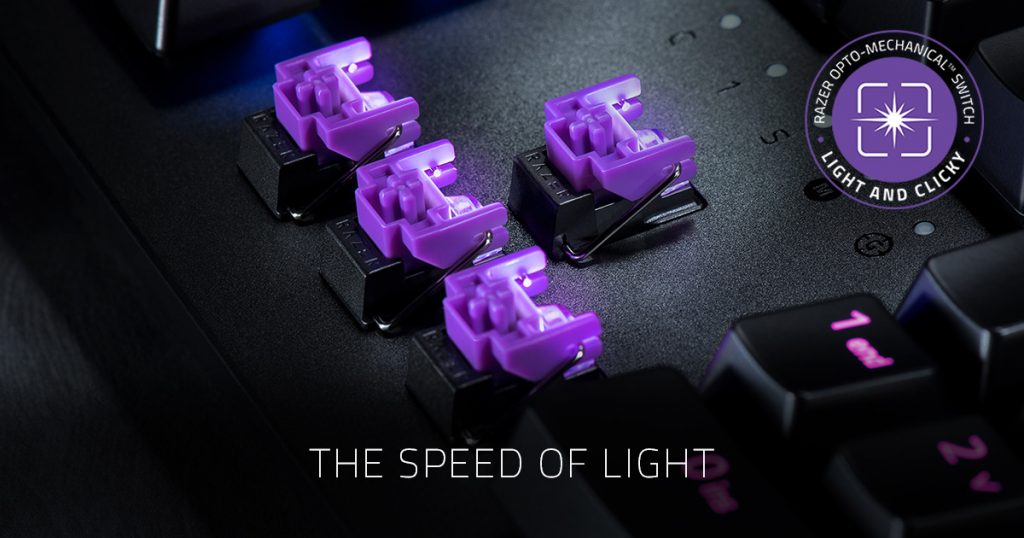 Considering how these are switches we are talking about, there is an obvious mechanism that goes into play in both of the switches. The better the mechanism, the more durable the switches in general.

With Razer, the mechanism is split into two parts; an optical part that is responsible for doing the actual work like registering the keystrokes and a mechanical part which is responsible for the movement of the switch. With that wait, the optical part means that there are fewer chances of the switch giving in after consistent use as it literally passes light to make the actuation happen, in the first place.

Cherry, on the other hand, uses the traditional switch mechanism where there is the housing, the spring, and the stem. These are the three components on which the switches are comprised. Definitely nothing special, but if it works, it works. Plus, if we go by the famous saying, “if it ain’t broke, don’t fix it”.

While many people are under the impression that the opto-mechanical is just a fad, but it is not just on paper, but in practicality, a much better mechanism that will result in much better durability, too. 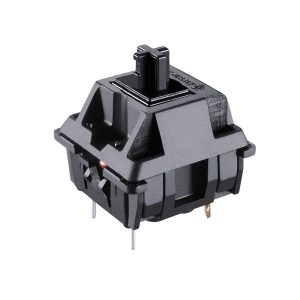 This might sound rudimentary or even unnecessary to some people but the thing is that keycap support is one thing that most people, who are into the idea of buying mechanical keyboards, take very seriously. So, many people who are in the market looking for a good mechanical keyboard will obviously search up the fact that the keyboard does support custom keycaps, or does not support them.

Razer being first, the stem is identical to the Cherry MX switches, so technically, all keycaps should fit perfectly fine without any issues. However, since Razer has a non-standard layout for the bottom keycaps, you will be left with using the original keycaps on the bottom row. That, plus the fact that since the keyboard is relatively new, and the switches, as of now, are proprietary, it is going to take some time for 3rd party manufacturers to come up with good replacement keycaps.

Cherry MX, on the other hand, enjoys a wider range of support thanks to the fact that it is no longer a proprietary switch. There are so many amazing keycap options available in the market, and some of them are 3D printed, as well. So, if you are looking for something good, this is the way to go.

While we definitely love the Razer opto-mechanical switches, but if you are looking for 3rd party switches, it is not something that will work for you. That is why the winner here is clearly Cherry MX. 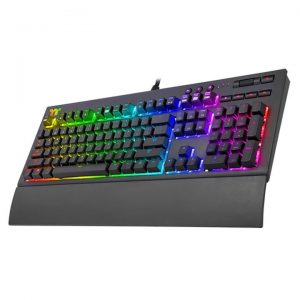 Now, if you do not know much about mechanical switches, you should know that they are available in different variations. When I say variations, I mean each switch has different types that cater to different use cases. For instance, you have the Cherry MX Blue that is tactile, have a clicky sound, and are made for typists; they also require more actuation force, so, they are heavier. Then you have the linear and inaudible Cherry MX red, and the tactile and inaudible MX Brown. These are three switches that are common, whereas Cherry is known for making a lot of different coloured switches. They all have 2.0mm of actuation point.

Razer on the other hand, has only released one version of the opto-mechanical switch so far. It has 45 grams of actuation force, 1.5mm actuation point, they are audible, and they have tactile feedback, as well. This is certainly nice as the switch is light and definitely fast, but sadly, Razer is currently not offering any variation, but considering how it has only been a year or so, we can expect Razer to come out with different variations.

For now, if you are talking from the perspective of switches, the winner is definitely Cherry since they have a lot of switches to boot.

Being an avid gamer and a writer, the one thing that happens to be one of the most important to me is the durability of a keyboard switch. Having dealt with several failed keyboards in the past, this is not something I really want to go through, and therefore, I always look for the best possible option available in the market.

The good news about both Cherry MX and Razer Opto-Mechanical switches is that they are extremely durable, and have been setting the standards.

Your average Cherry MX switch is rated at 50 million keystrokes; remember, these switches are properly tested and have proper industry standards that they have to meet before they are shipped out to the keyboard manufacturers.

Razer, on the other hand, trumps every other switch in the market; the opto-mechanical switches are rated at 100 million keystrokes. I know it sounds like a lot, and in all honesty, you have to be a really hardcore user to ever reach that limit, but it is nice to see Razer pushing the boundaries.

Needless to say, the opto-mechanical switches by Razer are definitely way ahead of the curve, and are definitely better than what else is available in the market, and will get the job done for you, as well.

For the longest time, Cherry MX has been the gold standard in the industry for being one of the most mainstream switches and the most durable, too. While the mainstream fame is still there, we are seeing the likes of Razer giving some serious competition to Cherry, and this time, we have to say that Cherry no longer sits on the top.

The Razer opto-mechanical switches, despite being new, are definitely better, and we honestly cannot wait for what Razer has in stores for us. However, we have to keep in mind that the Opto-Mechanical switch is the new kid on block that has been ruled by Cherry for the longest time. Both switches are great in their own right and will last you a long time.

Keeping that in mind, it would be wrong to just give the crown to just one switch.