Some Borderlands 3 users are suddenly unable to join any co-op session with friends or other random players. The error code that comes up after the session joining fails is ‘Matchmaking Error Code 1‘. This is a multiplatform issue that’s reported to occur on both PC and consoles (Ps4 and Xbox One). 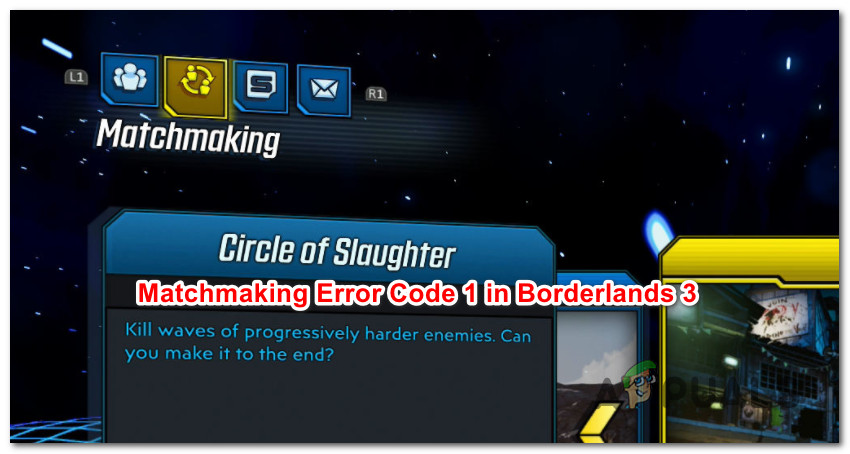 Before you try any of the other fixes below, you should start by ensuring that the Borderlands 3 servers are not currently dealing with a widespread issue. If there’s an outage server issue affecting matchmaking in your area, none of the fixes below will fix the problem.

To find out if other users are encountering the same Matchmaking Error Code 1 error code, you can check services like DownDetector or Outage.Report.

If the two directories above have revealed an underlying issue, you should check the official Twitter account of Borderlands 3 for any official announcements.

In case it’s clear that the game is currently experiencing widespread server issues, there’s nothing you can do to fix the matchmaking error – All you can do is wait for Gearbox to fix the problem on their side.

On the other hand, if there is no evidence of a server issue, move down to the next method below for additional repair strategies.

If you’re encountering this problem on a Playstation 4 console, you might be able to fix the problem by simply by performing a network text using the PS4 interface. This might seem like a weird fix, but a lot of affected users that were previously seeing the Matchmaking Error Code 1 have managed to fix it this way.

This is effective because the Text Connection feature will also refresh some network information including DNS and stored MAC address.

If this scenario looks like it could be applicable and you didn’t try this yet, follow the instructions below to do a network test:

If you still end up seeing the same Matchmaking Error Code 1, move down to the next potential fix below.

If the method above didn’t work for you and you’re seeing this error on a PS4 console, you might also be dealing with a licensing inconsistency. Some users that were seeing the Matchmaking Error Code 1 every time they attempted to join an online session have confirmed that the problem was finally fixed after they restored the licenses on their PS4 console.

This operation will ONLY be successful if you’re seeing this error code with a digitally purchased version of Borderlands 3.

If you don’t know how to do this, follow the instructions below to restore the licenses on your PS4 and fix the Matchmaking Error Code 1:

If you still end up seeing the Matchmaking Error Code 1 when trying to initiate an online co-op session, move down to the next method below.

As it turns out, this problem can also occur due to some kind of corrupted temp file that ends up affecting matchmaking in Borderlands 3. This problem is reported to occur on both Xbox One and Playstation 4.

In this case, you should be able to fix the problem by power-cycling your console in order to force your console OS to clear temporary data that might be causing the matchmaking error code 1.

Because the instructions on performing a power-cycling procedure will be different depending on which console you’re using, we’ve created 2 separate guides that will accommodate both player bases.

Follow one of the sub-guides below to power-cycle your console (the one applicable to your console of choice):

A. Power-cycling your Playstation 4 Console

B. Power-cycling Xbox One console

If the same problem is still occurring, move down to the final fix below.

Method 5: Restarting or Resetting your Router

If you previously made sure that you’re not dealing with a server issue, the next thing you should troubleshoot for is a TCP / IP issue that’s being caused by your current network configuration. In case you’re actually dealing with a network inconsistency, you should be able to fix it by restarting or resetting your network device.

You should start with a simple network reboot since this operation will not reset any custom data or settings that you previously established for your router. This will end up forcing your network device to assign new TCP (Transmission Control Protocol)  and IP (Internet Protocol) information for every connected device (including your PC or console) which should fix the problem.

To perform a network reboot, find the ON/OFF button on your router and press it once to cut off power. After you do this, physically disconnect the power cable and wait for 5 minutes or more to allow the power capacitors enough time to drain themselves.

Next, re-connect the power cable and wait until the Internet access to be restored before launching Borderlands 3 again to see if the problem is fixed.

In case the same problem is still occurring, you should move forward with resetting your router back to its factory defaults. This will be effective in instances where the problem occurs due to some kind of restriction you have previously enforced.

But before initiating this procedure, keep in mind that this will end up clearing any personalized settings including whitelisted items, forwarded ports, custom credentials, and blocked sites.

If you understand the consequences and you still want to move forward with the route reset, you’ll need to use a small screwdriver or a toothpick to press and hold on to the reset button (it’s built-in on the vast majority of models).

Initiate router reset by pressing and holding on the reset button until you see all your router LEDs flashing at the same time – When this happens, release the reset button and wait until the Internet access is restored.

Note: If you’re using a PPPoE connection, you will most likely need to reinsert login credentials supplied by your ISP in your router settings in order to restore Internet access.

In case you already did this and you’re still encountering the same matchmaking error code 1 in Borderlands 3, move down to the next potential fix below.

How to Fix ‘Matchmaking Error Code 1’ on Borderlands 3