EVGA Precision and MSI Afterburner are two of the most common GPU monitoring and overclocking tools that are available in the market. The good news about both of these software solutions is that they are largely the same, and the best part is that regardless of the GPU you have, they both will work. For instance, if you have a GPU by EVGA

and you want to control and monitor it using MSI Afterburner, you can do so without any issues whatsoever.

So, how are they different from each other then? Well, the differences are next to minor, or nothing, in reality. As a matter of fact, many people do not even find a single difference between both of them. Still, for the sake of readers, we are penning down this opinion piece and finding how EVGA Precision and MSI Afterburner stack against each other.

Let’s not waste time and have a look. 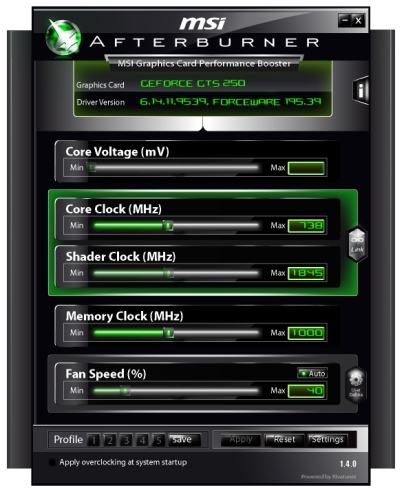 The first thing that we are going to compare is the interface. As far as this is concerned, it is largely the same for both of the tools. However, we did notice that the interface of the EVGA Precision is somewhat cleaner than that of the MSI Afterburner.

With EVGA Precision, everything is neatly organized in one single panel, and while the same can be said about the MSI Afterburner, at times, it feels like it is all over the place. Below, you can see a direct comparison of the interface of both the tools and be the judge for yourself.

Sure, EVGA does take the cake when it comes to interface. However, what of the options that you are going to get? Well, when it comes to options, both tools are great and do provide you with all the basic and advanced features that you would expect from good monitoring software.

However, the thing is that MSI Afterburner is more equipped with features when compared to the Precision by EVGA. The options and features that you get from MSI Afterburner are far more granular than the ones you would be getting with EVGA Precision. 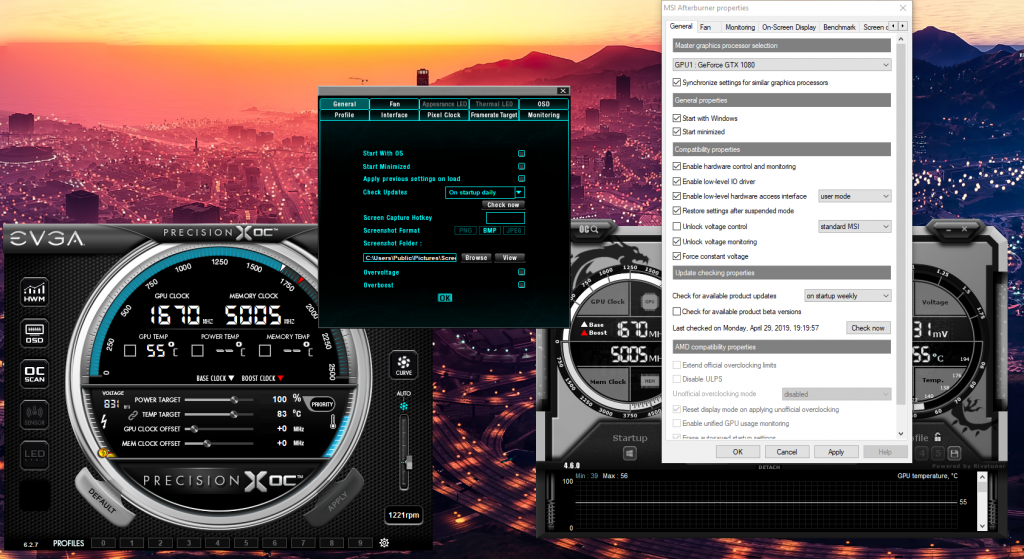 Performance is another important factor that is associated with nearly every software you use. Believe it or not, performance is a lot more important than you might think and without having a properly performing tool, there is no point in utilizing either of the options.

Thankfully, both MSI Afterburner and EVGA Precision did not bring up any performance issues that might hinder the overall experience. Both of the monitoring software solutions work in a great way. They start up with Windows, although you can change that, and run in the background without any issue whatsoever.

The performance impact might be there but it is so small that it is not noticeable in the games at all.

There has been a common misconception that both of these monitoring tools only work with the graphics cards that are from the respective add-in board partners. Which means that only EVGA GPUs can utilize the EVGA Precision and only MSI GPUs can utilize MSI Afterburner.

The truth, as a matter of fact, is different. Whatever GPU you have from whatever add-in board partner, both tools will recognize it and work with it fully. However, there are some things that you must know. EVGA uses the Precision X for lighting controls on its GPUs, and the same controls will not work if you have a non-EVGA GPU, and additionally, when you run the Precision for the first time, you are told that you are not using an EVGA GPU, and the program asks you to input some basic information.

Other than that, as far as full functionality is concerned, both EVGA Precision and MSI Afterburner work the same way in almost every single regard.

Whether you want to use EVGA Precision or MSI Afterburner, you can go ahead and use either of them without any issues. Both software solutions are strikingly similar and both of them work the same way. Sure, there are minor differences that we have talked about already. On a side note if you’re looking to experience ray tracing at its best then these RTX 2080s are capable of driving those ray traces with ease.

Anyways, coming back to our topic, for the large part, you are not going to run into any issues that might come in the way, and the best part is that as far as the overall user experience is concerned, it is going to be the same and great experience on both of the options.