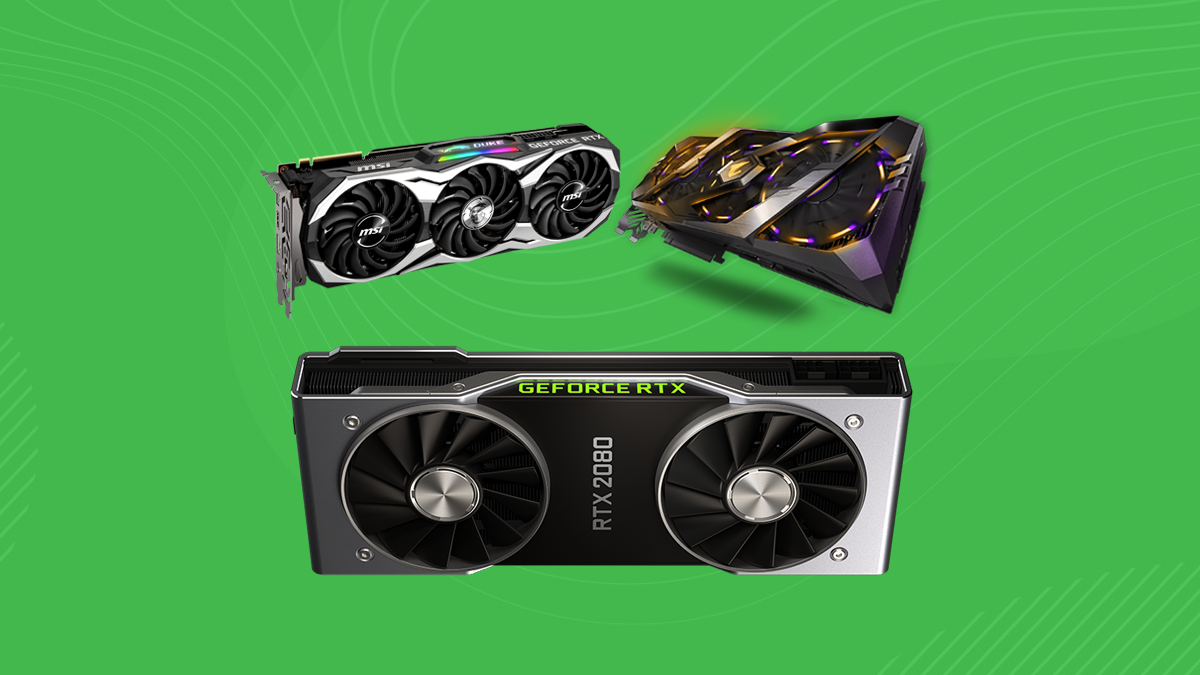 Being such a powerful card, the RTX 2080 is certainly not the easiest card to handle. It is rated for a maximum power draw of 215W according to official ratings, which is moderate considering the modern standards. However, since the RTX 2080 is an enthusiast-grade product, purchasing a premium variant of this card makes a lot of sense. Investing in a high-end variant of the card will make sure that there are no thermal or acoustic issues down the line, and the user can even dabble with some overclocking should they see fit.

Our Recommendations For The Best RTX 2080 GPUs

Top Of The Line

MSI’s Gaming X lineup has always delivered some extremely high-quality variants for each generation of graphics cards. The MSI Gaming X Trio RTX 2080 furthers that cause by providing a top-of-the-line variant of the RTX 2080 that has excellent build quality, amazing thermal performance, and a unique design that would be the star of most modern gaming PCs.

Under the extensive 327mm fan shroud, MSI has installed a bulky heatsink that is attached to a series of copper heatpipes that spread the heat throughout the fin array of the heatsink. The fins of the heatsink are uniquely curved which increases the surface area of the heatsink for maximum heat dissipation, while also improving airflow through the fins. The airflow is provided by three, high-quality Torx fans which are a part of MSI’s Tri Frozr cooler design. The fans themselves are extremely quiet even under load, and even turn themselves off when the GPU is idling in order to improve acoustic performance.

Aesthetically, the MSI Gaming X Trio is quite a unique-looking card. The angular and aggressive design language is prevalent on this card, especially on the fan shroud. There is plenty of RGB lighting as well on the card, which should be ideal for those who want to customize their GPU to match the theme of their PC. Many enthusiasts prefer mounting the MSI Gaming X Trio RTX 2080 in a vertical orientation in order to show off its beautiful design. The backplate of the card is also filled with numerous cuts and vents which give a very angular look to the card even in the horizontal orientation.

All in all, the MSI Gaming X Trio RTX 2080 is a premium variant of the RTX 2080 that possesses excellent build quality, along with some amazing performance in the thermal and acoustic sectors. The Gaming X Trio does demand a sizeable price premium over MSRP but that might just be worth it if you’re looking for a high-end RTX 2080 that does not disappoint in the long run.

ASUS’s ROG Strix line has always been an impressive contender when it comes to AIB partner graphics cards, and the ROG Strix RTX 2080 is certainly no exception. It is one of the most premium variants of the RTX 2080 currently available on the market, and it certainly should be on the priority list for enthusiast buyers.

What makes the ASUS ROG Strix variants really impressive is their excellent management of temperatures and noise. The ROG Strix RTX 2080 features an extensive 3-slot heatsink design that takes care of temperatures quite well and leaves plenty of headroom for overclocking as well. The heatsink is aided by three Axial Tech fans from ASUS, which are optimized for high static pressure as well as for decent airflow through the heatsink. This maximizes the heat-dissipation capabilities of the card while also providing excellent acoustic performance as well.

As far as looks go, the ASUS ROG Strix cards are some of the best-looking cards on the market. At first glance, it might seem like the ROG Strix RTX 2080 is a bit plain and understated, but as soon as the RGB lighting zones light up, the card’s aesthetics are raised to a whole new level. Apart from the beautifully designed fan shroud, the lighting is also present on the sides of the card as well so it is visible in both vertical and horizontal orientations. The ASUS ROG Strix RTX 2080 is another card that looks really great when installed in a vertical orientation.

Overall, the ROG Strix is a really premium option that might interest you if you are looking for the best of the best when it comes to the RTX 2080. Its hefty price premium is something to be considered, however, as there are other competing options that might just offer a bit better value.

EVGA is known for making some of the most high-quality AIB aftermarket graphics cards for any GPU, and it was no different for the RTX 2080. Our pick out of EVGA’s complicated lineup is the high-end EVGA FTW3 Ultra RTX 2080. Since the RTX 2080 is an enthusiast-grade graphics card, it really makes sense to opt for a premium variant such as the FTW3 if you are in the market for this card.

The highlight of the FTW3 Ultra RTX 2080 is its excellent thermal management system thanks to its beefy heatsink array and incredible fans. EVGA has also included a lot of sensors all over the PCB of the card which provide the card with real-time sensitive information such as the temperatures of different spots, in order to best manage the cooling system for optimal performance. The fans are also quite premium and contribute a lot to the card’s impressive acoustic performance. Under light load or in idle situations, the fans turn off automatically and that improves both noise levels and the longevity of the fans.

If aesthetics are your thing, then you might want to avoid the FTW3 Ultra variant of the RTX 2080. As good as its thermal performance is, the card does not look anywhere near as premium as some of the aforementioned options. The fan shroud is plain and bare, with an understated black color that does not stand out from the crowd. There is no RGB lighting on the fan shroud whatsoever, so that is something to keep in mind when making a purchase decision if you like customizing the look of your GPU.

The EVGA FTW3 Ultra RTX 2080 is another performance-focused premium variant of the RTX 2080 that should be ideal for those buyers who are looking for the lowest temperatures and noise levels but don’t really care about looks as much. It is still quite an expensive graphics card, however, so other options should be taken into consideration as well.

Out of all the Zotac variants for the RTX 2080, our pick is the Zotac Gaming GeForce RTX 2080 AMP edition which is sort of the second-best variant from Zotac’s lineup. The AMP variant of the RTX 2080 makes a lot of sense due to its combination of a decent feature-set and reasonable price premium.

As far as the cooling performance goes, the Zotac GeForce RTX 2080 AMP does not disappoint in this area. It doesn’t offer chart-topping performance like some of the cards mentioned above, but considering its mid-range price target, its performance is not underwhelming at all. The card still features a hefty heatsink array with several heatpipes designed for efficient heat dissipation. The fans that Zotac has installed in the AMP variant are good quality, quiet fans that do not get obnoxiously loud even under significant load.

In terms of looks, the Zotac GeForce RTX 2080 AMP is a bit underwhelming, especially compared to some of the more premium options on our list. The fan shroud is a bit bizarrely shaped with an angular design language that looks a bit unconventional. Lighting is restricted to the Zotac Gaming logo on the side of the card which is visible when the card is installed in the horizontal orientation. The RGB lighting can be controlled using Zotac’s software, of course.

Overall, the Zotac GeForce RTX 2080 AMP is a reasonable, mid-range variant that offers more than acceptable thermal and acoustic performance without completely breaking the bank. Gamers looking to maximize their bang-for-the-buck should definitely prioritize this variant of the RTX 2080.

Gigabyte makes the list with the Gigabyte GeForce RTX 2080 WindForce 3X graphics card which is a base model variant of the RTX 2080. Contrary to some of the aforementioned options, this is not a premium offering rather it is aimed at or near MSRP pricing to maximize the value proposition for the buyer.

The WindForce 3X RTX 2080 offers decent performance when it comes to thermals and noise. It will certainly not be topping any charts in this category, but its performance is sufficient to manage the RTX 2080 GPU at stock settings. The heatsink is aided by three WindForce fans, hence the name, which focus the airflow directly through the fins in order to improve the efficiency of heat dissipation. This allows the card to keep its temperatures in check, without ramping the fans up too much. On full load, however, the fans do have a tendency to become a little bit noisy but that certainly isn’t a deal-breaker at this price point.

If you are more biased towards aesthetics, you might be disappointed to know that the WindForce 3X is quite understated and plain in that department. The fan shroud features no notable design cues and there is a complete lack of lighting as well. This card is definitely not the one for those who are looking for an RTX 2080 for a themed gaming PC. Still, at this competitive price point, the aesthetics really do not matter a lot as the card doesn’t look unappealing from any angle.

All in all, if you are looking for an RTX 2080 variant that gives acceptable thermal and acoustic performance but does not break the bank, then this might just be the perfect budget pick for you.

Yes, the RTX 2080 is still a very capable card in 2021. It can handle 1440p gaming quite well, and can even dabble with some 4K gaming at decent framerates.

The RTX 2080 is primarily a 1440p card, but it can handle some games at 4K as well. Lighter games such as eSports titles or competitive games, or AAA games with some settings turned down should be able to run at 4K with playable framerates.

Any modern gaming PC with a reasonably powerful CPU should be able to handle the RTX 2080. Ideally, one should pair the RTX 2080 with at least an AMD Ryzen 5 CPU (2000 series or newer), or an Intel Core i5 (8th Gen or newer) to avoid any bottlenecks.

Why is the RTX 2080 so expensive these days?

The RTX 2080 has been affected by the global silicon shortage and ongoing cryptocurrency trends just like other graphics cards. Low stock and high demand have contributed to its high pricing situation.