Sony has been shaking the audio market for some time now. Their full-sized MDR-1000X was a smashing hit and dethroned the Bose QuietComfort 35. However, Sony did not stop there, they released two more iterations, only making them better than before. That aside, Sony actually stepped into the true wireless market, but couldn’t make the mark it wanted to make.

However, with the newly released Sony WF-1000XM3, things have changed a lot, and the reviews are raving about these true wireless earphones for some time. However, are they good enough to dethrone the fan-favorite Apple AirPods Gen 2? That is what we want to find out.

Considering how we want you to be able to buy the best true wireless earphones, we should have a good comparison so you do not have to worry about making the wrong choice.

So, we have trudged onto find just which option is best for you. The comparison is not difficult and tends to make things simpler and straightforward for you. So, without wasting any more time, let’s have a look.

While I would prefer practicality over anything else, there are times when I really would like to have my headphones look good and be comfortable at the same time. This is a huge thing for me as a regular music listener and commuter, as well. I simply cannot afford to have something that does not look or is not comfortable.

The AirPods follow the same design language that Apple introduced with the original generation. While we do not mind the design, we think that the golf-club design is getting hold, and most importantly, it is intrusive, at best. Especially when you look at the fact that the AirPods are available in glossy white, and not black. This only makes things a lot more evident. The comfort, on the other hand, is good. However, if you want something to block the outside noise, you are not going to be getting that if you are going for the AirPods; they do create a seal around your ears, but it is not that strong.

On the other hand, the Sony WF-1000XM3 are much more discrete in their design they are available in two colors, as well. They are pretty small, as well. So, you do not have to worry about looking out of place when you are wearing the earphones out in the public. They are also pretty great

As far as the design language and comfort is concerned, we have to hand it to the Sony WF-1000XM3; they are not just comfortable, but inherently better when it comes to the design 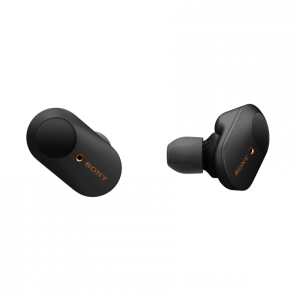 The generation 2 of AirPods to have some new features like the “Hey Siri” feature that allows you to call Siri whenever you want to. A feature that is definitely a desirable one by many.

However, on the other hand, you have the Sony WF-1000XM3, a pair of true wireless earphones that are loaded with all sorts of advanced features such as active noise cancellation; the same one that you find on their full-sized headphones. You have touch sensors, too. Making the whole swiping the music experience so much easier and much more convenient. 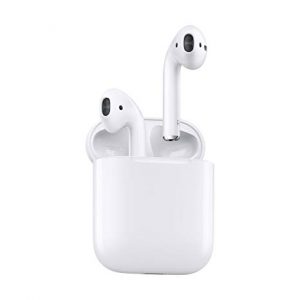 Battery life is something that gets discussed time and again when you are looking at wireless options, even more so when we talk about true wireless earphones because, with their smaller size, the battery life is actually extremely important.

When you are looking at the Sony WF-1000XM3, the battery life tends to be better than what you might expect. Despite their small size, you get 6 hours of playback with active noise cancellation on and 8 hours when it is turned off. You get 24 hours additional in the provided case with noise canceling on, and 30 hours if you turn it off.

As opposed to the 4.5 hours provided by Apple. The disparity is certainly there even though Apple does catch up when you look at the additional battery life.

Last but not least, we are going to focus on sound quality. After all, we are talking about a product that will mostly be used to listen to music, attend calls, or watch movies. So, we want to go with something that actually has a better sound quality overall.

When you are looking at both; unsurprisingly, there is no contest. It actually is nearly impossible to beat Sony at their own game. They have been among the audio pioneers for several years, and are continuing to improve, too.

If you are looking for something that sounds stellar and coherent, then going with the Sony WF-1000XM3 is a no brainer. Whether you are listening to music, attending calls, or watching movies, the sound quality is stellar through and through, and we can assure you that you will not have to worry about anything that might come in the way, either.

True, the Apple AirPods do sound good, but when you put them next to Sony, the disparity in the overall sound quality starts to become evident. 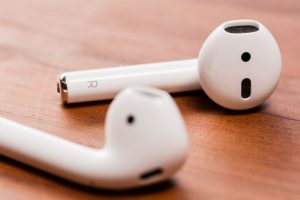 In conclusion, it is safe to say that the Sony WF-1000XM3 are the best true wireless earphones available in the market. However, there is one thing that you need to know. These earphones do not come cheap. They are actually more expensive than their direct competitors; namely the Galaxy Buds and the Apple AirPods Gen 2.

However, they are much better in nearly every single aspect, as well. Giving you an overall amazing experience without really causing a lot of issues that might come in the way. Ultimately if you’re on a budget and can’t afford these expensive earbuds then read our iQute Wireless Earbuds review, they are well worth the price tag and should be considered by all means.