Razer has been releasing some very innovative products in the previous years and has designed some top of the line laptops, keyboards, headphones, and mice. The reliability issues from the company are now a thing of the past and many of the products now come with more than one-year warranty.

Razer has always been a very competitive company in the peripherals area and their products are being used by a lot of esports gamers. Their latest series of keyboards and mice come with their own optical/optomechanical switches and provide very unique features.

Anyways, today we’ll be reviewing the Razer Viper Ultimate which is the flagship mouse by Razer and comes with a wireless interface. This is an ambidextrous mouse and succeeds the original Razer Viper in terms of performance and durability. So, let’s have a look at the details of this flagship weapon.

The front of the box has the picture of the mouse, its name and information about the optical switch, onboard-memory, light-weight design and some other details.

Inside the box, the mouse and the charging dock are packaged in a big piece of foam while some other items are placed below.

The bottom of the mouse hosts the USB adapter for the mouse, which is responsible for receiving the wireless signals of the mouse. The mouse skates are also improved from the original Razer Viper and now there are four PTFE mouse skates, white in colour, instead of two big black ones found on the Viper. Apart from that, there is an On/Off switch along with a DPI button and an LED indicator. The DPI button can be used to change DPI settings, providing five options on the default settings; 400, 800, 1600, 2400, and 3200. If you want to customize these settings, you will have to do that from the Razer Synapse 3 software.

The mouse comes with a charging dock as well, which is used for charging the mouse. This results in wireless charging, as you can just place the mouse on the charging dock. The charging dock is also accompanied by beautiful and vibrant RGB lighting, which can be customized through Razer Synapse 3 as well. The dock itself connects to the PC via the provided Micro-USB to USB Type-A cable.

The Razer Viper Ultimate hosts the same shape as that of the Razer Viper, which in comparison, is similar to the shape of the Logitech G-Pro. In fact, the Razer Viper Ultimate is a direct rival to the Logitech G-Pro Wireless, as both mice share similar features. Now coming back to the shape, the body of the Viper Ultimate is slightly larger at the front, comparing to the middle area when it comes to the width and the back-side is even larger than the front. When looking at the mouse from the side, you can notice that the hump is present at just behind the middle part of the mouse.

The surface of the mouse, as mentioned earlier, is very grippy and the hands cannot just slip on the mouse. The rubberized sides of the mouse play an important part in the grip as well. As for the gripping styles are concerned, the mouse is great for both fingertip-grip and the claw-grip style. It can also work with palm-grip but mainly for those people who have small hands. Speaking of the size, the mouse can be described as a medium-size one; not too small and not too large.

Overall, the Razer Viper Ultimate excels at both the shape and the grip with no issues whatsoever when speaking of these characteristics.

Razer Viper Ultimate comes with an all-new Focus+ sensor, which is, as of now, the most advanced optical sensor of all times. The sensor comes with tremendously over-kill specifications of 20,000 DPI and up to 650 IPS tracking speed while providing AI features like Smart Tracking, Asymmetric Cut-off and Motion Sync. It is a completely flawless sensor, as expected, and is free from sensor rattle, jittering, acceleration, spin-off, or other anomalies.

As for the features, Smart Tracking calibrates the sensor to the surface of the mouse-pad during usage so that you don’t have to calibrate it yourself. Asymmetric Cut-Off is a great feature, which can also be called landing distance and it means that when you bring the mouse close to the surface after lifting, how close the mouse must be to the surface so as to start tracking again. This feature works in combination with the lift-off distance and is a nice addition to the settings. At the last, Motion Sync is responsible for the synchronization of the sent signals of the mouse with the signals of the processor to minimize the response times.

The Viper Ultimate provides a maximum DPI setting of 20,000. This might be quite irrelevant for gamers but it can have many usages in other fields. Out of the box, the max achievable DPI with the button is 3200 and if you want to customize the DPI, you will have to install Razer Synapse 3 and set the DPI, which provides options with a step of 50.

Due to these switches, double-registering of the mouse clicks aren’t expected at any point, while they are supremely rated at 70M keystrokes. Apart from the rating, the switches are very responsive than other switches in the market due to the optical nature. As for the feedback, the main clicks feel very nice with a medium travel distance. The concaved areas of the main clicks also enhance the feeling of the clicks.

The scroll wheel is the same as that of the Razer Viper as well. The textured surface of the wheel feels great, however, the noise of the wheel is somewhat higher than the Razer Viper, to provide more vivid feedback. The noise is not that much, although, to cause distractions during gaming.

Overall, the switches of the Razer are at the top when it comes to performance and reliability, especially in the wireless mice, although there might be other mice providing better scroll wheels.

There are four side buttons present in the Razer Viper Ultimate, two on each side. The reason for this is that the Viper Ultimate is an ambidextrous mouse and side-buttons on each side would be useful for both the right-handed and left-handed users.

As for the quality of the side buttons is concerned, they feel fine without any crackling noise, however, the travel distance is not very long, which is probably a design-strategy for faster response times.

Razer Viper Ultimate features the all-new Hyperspeed Wireless technology which is, theoretically, even faster than the Logitech Lightspeed Wireless technology by up to 25%. The wireless performance of the mouse is really astonishing and one cannot notice any types of hiccups or similar problems even during intense gaming sessions. The Hyperspeed technology also keeps the polling rate of the mouse as close to 1000Hz as possible, with an average of 998Hz.

As for the battery-timing is concerned, the mouse can be used straight for 70 hours before feeling the need to be charged. Moreover, you can charge the mouse in only 90 minutes, which is awesome. The weight of the mouse is still amazing, at 74g, despite having batteries inside. 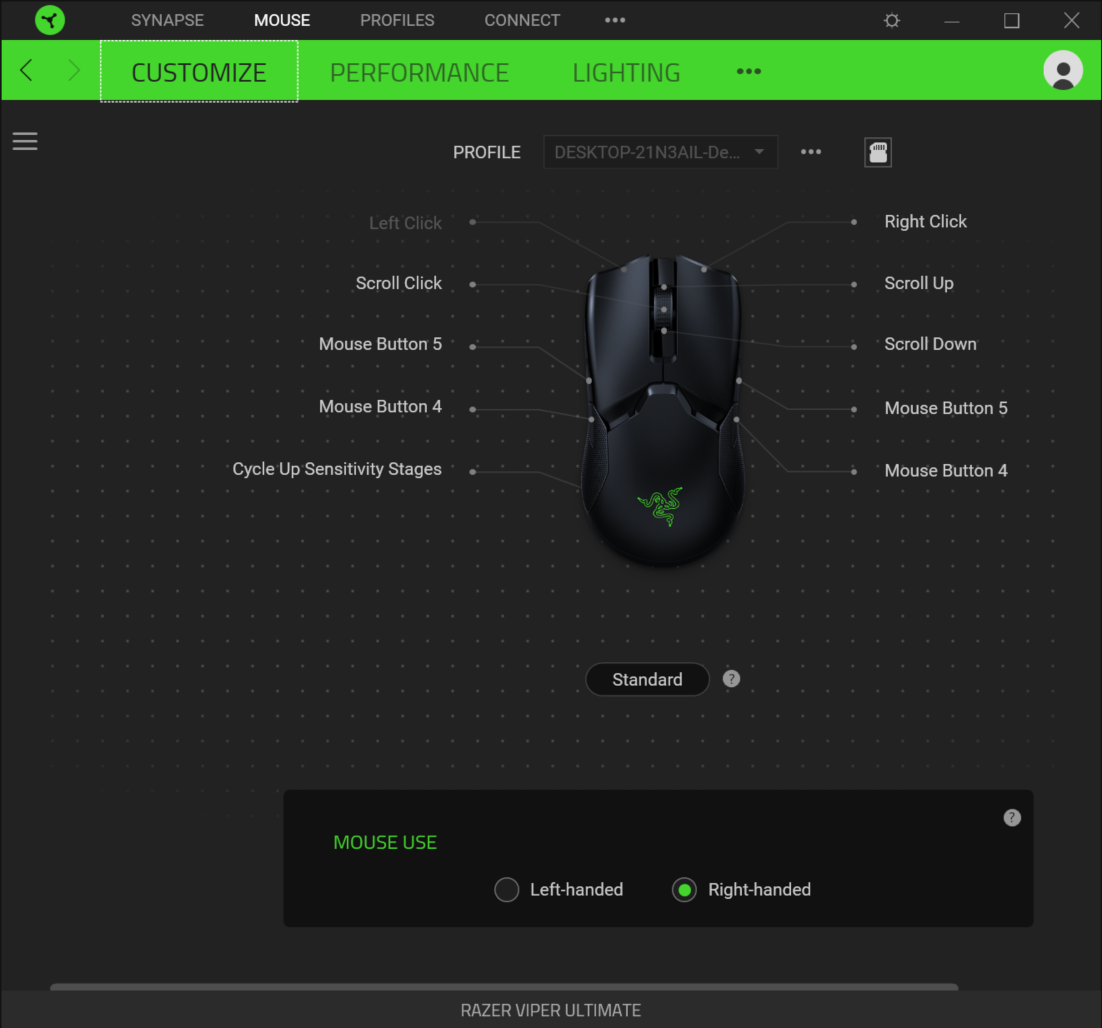 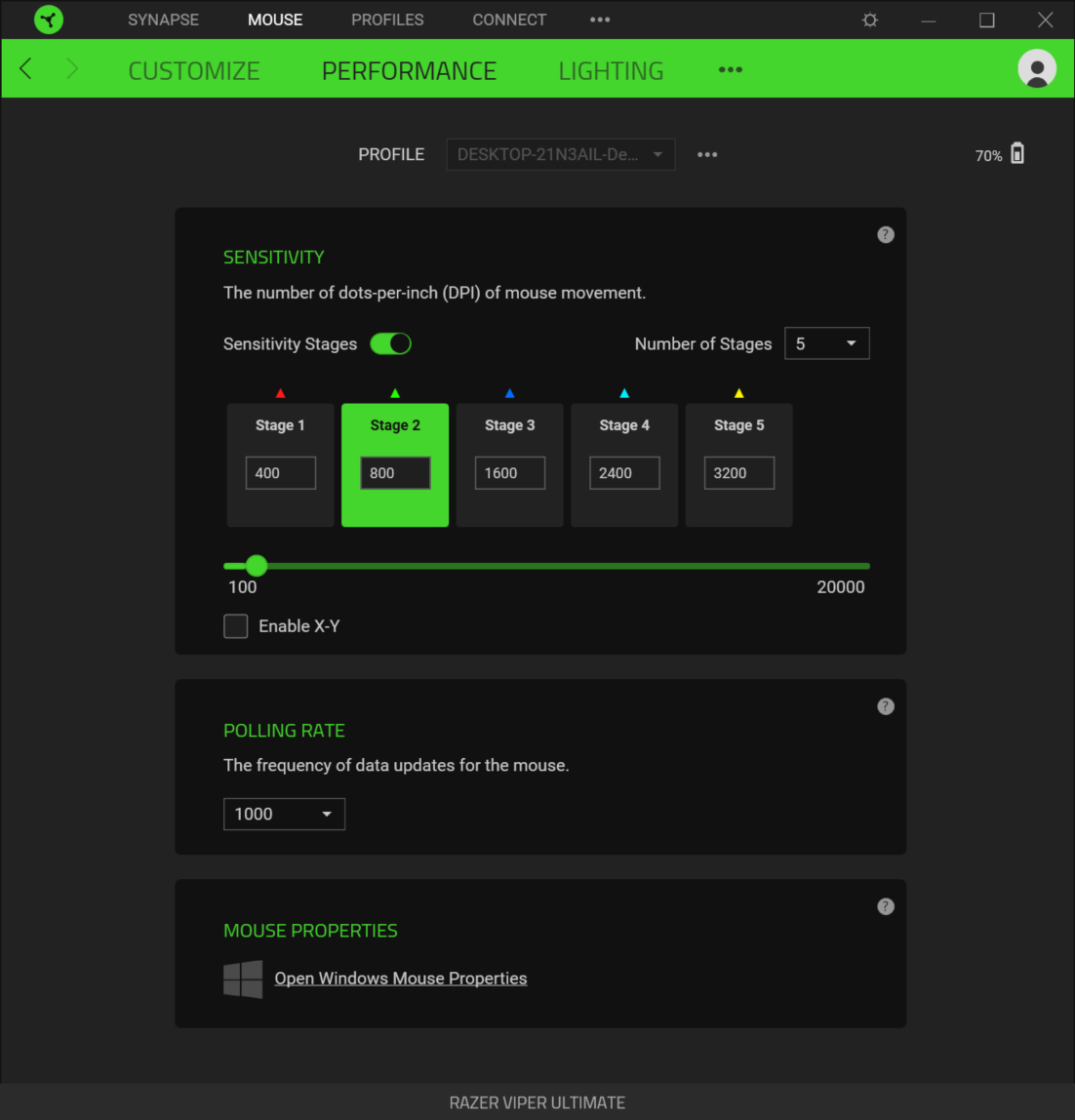 One can change the DPI settings, Polling Rate, Lift-Off Distance, Asymmetric Cut-Off Distance, and some other mouse parameters in the software, which are pretty easy to change. The software also provides power-saving modes if you want to conserve battery. 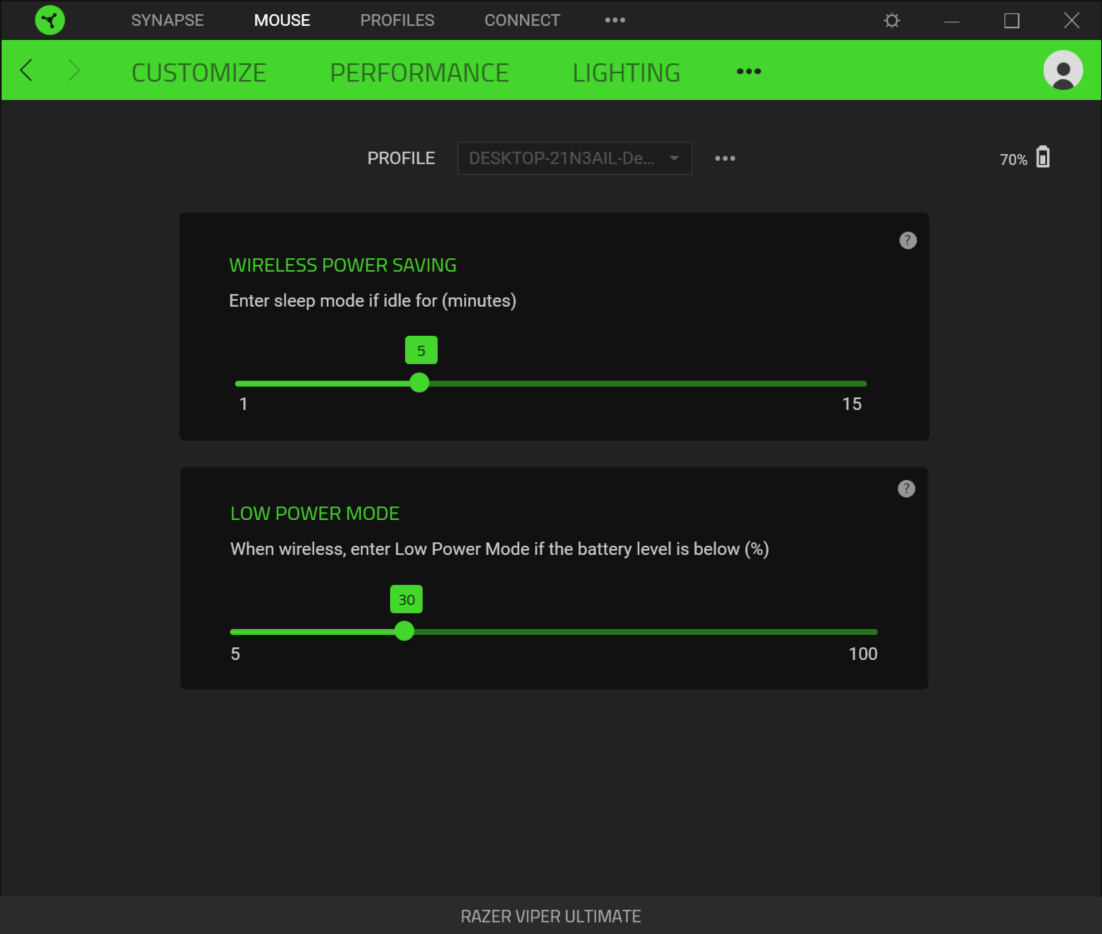 Apart from all these, one can set various macros, use the famous Hypershift function of Razer Synapse, or do other functionalities such as Multimedia settings, launching a program, or various shortcuts, etc.

Razer Viper Ultimate is definitely a step-up in the wireless category, so let’s have a view at the performance of the mouse.

When using the mouse for gaming, one can barely feel that the mouse is wireless, i.e. no latency issues whatsoever. Other than that, the shape of the mouse is quite optimized for fingertip or claw-grip users so the hands fit on the mouse nicely.

The mouse skates glide very nicely and are much better than the Razer Viper. The top-notch sensor results in no spin-offs even if you move the mouse at the highest speeds. The buttons feel great and one cannot just complain about the battery-timing. Most importantly, the weight of the mouse is extremely low, at just 74g, which is great for FPS gaming. Overall, Razer Viper Ultimate will improve your gaming skills by a lot if you are lacking on the hardware side.

Wireless mice are very convenient to use and that is why the Razer Viper Ultimate is a good choice for regular desktop usage. The weight of the mouse might be an issue for some users who are required to work with precision but other than that, the shape of the mouse will not cause any hindrance. The RGB lighting can be turned off if you are bothered by it and the looks of the mouse are not completely gaming, so you can use the mouse in your office as well.

Overall, Razer Viper Ultimate is a fine choice for productivity usages, although, you should also take a look at some other mice, especially if you want to work with a heavy-weight mouse.

Overall, the Razer Viper Ultimate is an astonishing product and for gaming, there is definitely no better wireless mouse as for now, thanks to the low weight, Optical switches, top of the line sensor, optimized mouse skates, textured surface, and a great shape. We cannot say much about the life of the mouse but as it looks like, this mouse can last you more than a couple of years. The wireless technology feels seamless, so as not to cause any disturbance during gaming sessions. The Razer Viper Ultimate is definitely worthy of the title “Wireless King”. 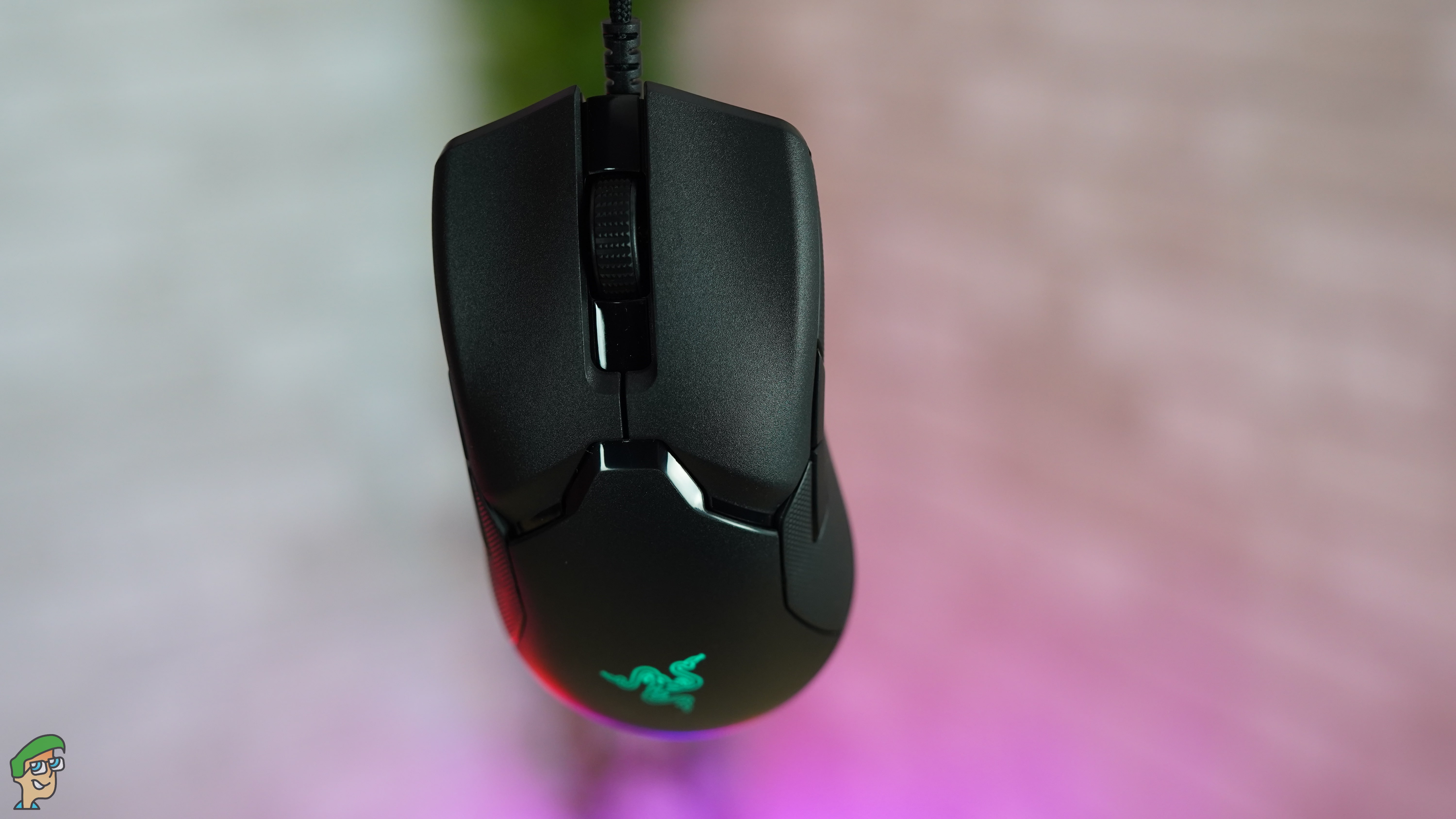 VERDICT:Razer Viper Ultimate has revolutionized the gaming community with such a light-weight wireless gaming mouse capable of performing as good as the all-time best gaming mice in the market. 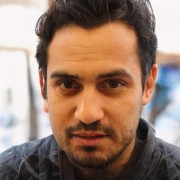