One major complaint musicians have against digital amp simulators is the audible “fizz” in the high-end frequency. It’s difficult to explain through words, but if you’re a guitarist who uses amp simulators, you’ll know exactly what we’re talking about. Its true that the presets on a lot of amp simulators can be less than desirable, which is why you need to do some tone-tweaking to get the most realistic sound possible from guitar amp simulators.

Another problem (though this isn’t limited to amp simulators, but guitar amplifiers in general) is that you can get some incredibly loud feedback in two different forms – the first is feedback hum, which typically comes from your pickups, and the second is harmonic feedback, which typically rears its ugly head when you’re using high levels of gain/distortion and a high input level.

How to Remove Fizz from Amp Simulators

So to address the problem of fizz on the high-end frequency spectrum, first we should understand exactly what’s going on here. Amp simulators produce a digital signal, whereas real guitar amps produce analog signal. Analog signal is sound the way Mother Nature intended it, pure and unfiltered. Digital signal is man-made representation.

For the most part, that fizz on high-gain amp simulators is the digital interpretation of harmonic distortion. Its true that you would hear some fizz if you pointed a real amp cabinet directly at your head and cranked the gain up, but it’s generally an airier fizz that can actually enhance recording. When a digital amplifier tries to “recreate” this fizz, it ends up being a wall of white noise that adds all kinds of resonance to higher frequencies, which sounds unpleasant – because it isn’t natural. What you’re hearing is the unnatural simulation of natural high-gain fizz, in a nutshell.

To remove this fizz, what you need to do is set up your overall amp / cab tone first, and then use a parametric EQ to sweep for the offensive frequency, and cut it hard. For this step-by-step tutorial, we’re going to be using Reaper DAW with FabFilter Pro-Q 2, which is a paid plug-in but has a 30-day trial with all features. However, you can use whatever parametric EQ you want, if it allows you to do the same things we’ll be doing in this guide.

Our FX chain in the screenshots goes like this in Reaper: 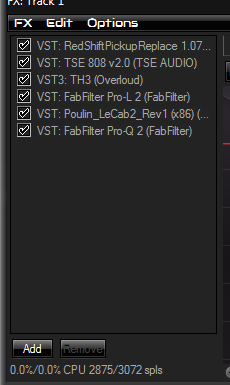 However, you can really play with this placement to find your tone, especially if you’re throwing effects pedals into the mix.

In any case, once you’ve set up your basic FX chain without an EQ, and you like the sound of your guitar tone, throw the EQ at the end of the FX chain.

Now what you need to do is record yourself playing, some basic chords (with heavy distortion) will do, just record a bunch of chords. Now play it back on repeat / loop. 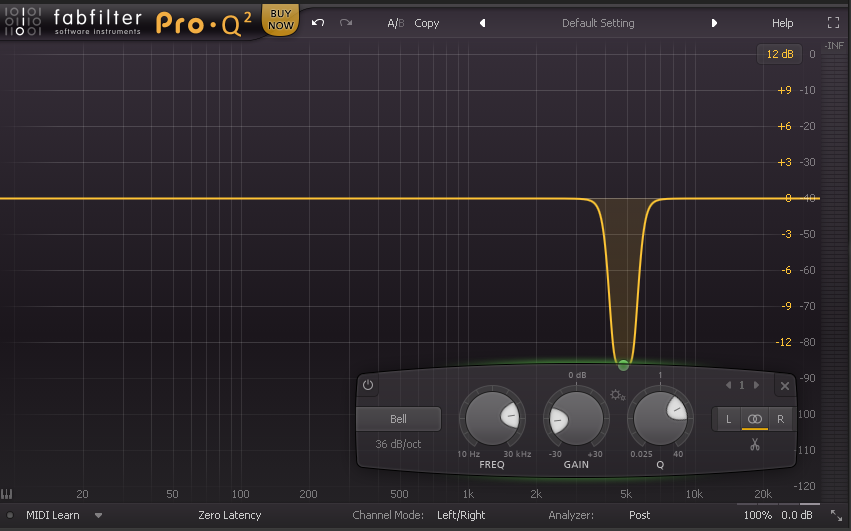 You should start to hear a very audible “whistling” noise. Once you’ve found it, narrow your EQ band (a bell shape at around 36DB works good for this), and drop it hard. Around -13DB should be fine.

Another problem you’ll encounter with amp sims that have the distortion cranked up is really bad harmonic feedback. This will be in the form of extremely loud “squeals” whenever you mute your strings after playing – for example, you play a chord, mute the strings, and your speakers scream at you.

The best remedy is to just lower the gain / distortion on the amp sim, but if you’re intent on playing with maximum distortion, a peak limiter would probably help a bit (combined with the parametric EQ trick we did above).

You should know that a noise gate isn’t going to really help you here, you need a peak limiter that will quickly attack frequencies over a certain peak. This is because a noise gate only eliminates static hum from noisy pickups, whereas harmonic feedback gets passed through as normal signal.

You won’t be able to completely eliminate harmonic feedback when using high distortion, but you should be able to minimalize it without effecting your tone too much – unless you’re trying to play like Zakk Wylde and make lots of pinch-harmonic squeals.

What you want to do is throw a good peak limiter (FabFilter Pro-L works good for this) into your FX chain, between your amp and cab.

FabFilter Pro-L comes with some good presets for exactly this problem, so adjust as necessary. But whatever peak limiter you’re using, you basically want to try and recreate those loud harmonic feedbacks and keep adjusting the DB limiter in your plug-in, until they go away.

How to Remove Fizz and Harmonic Feedback from Amp Sims