The X299 chipset is a HEDT chipset which mainly supports the seventh generation Intel HEDT processors but the support for the 9th generation was also added as a BIOS (Software) update in many motherboards, as the socket remained the same. X299 chipset offers a lot of advantages over the mainstream chipsets like Z370 and B360. One of the most prominent advantages among those is the support of Quad-Channel memory. 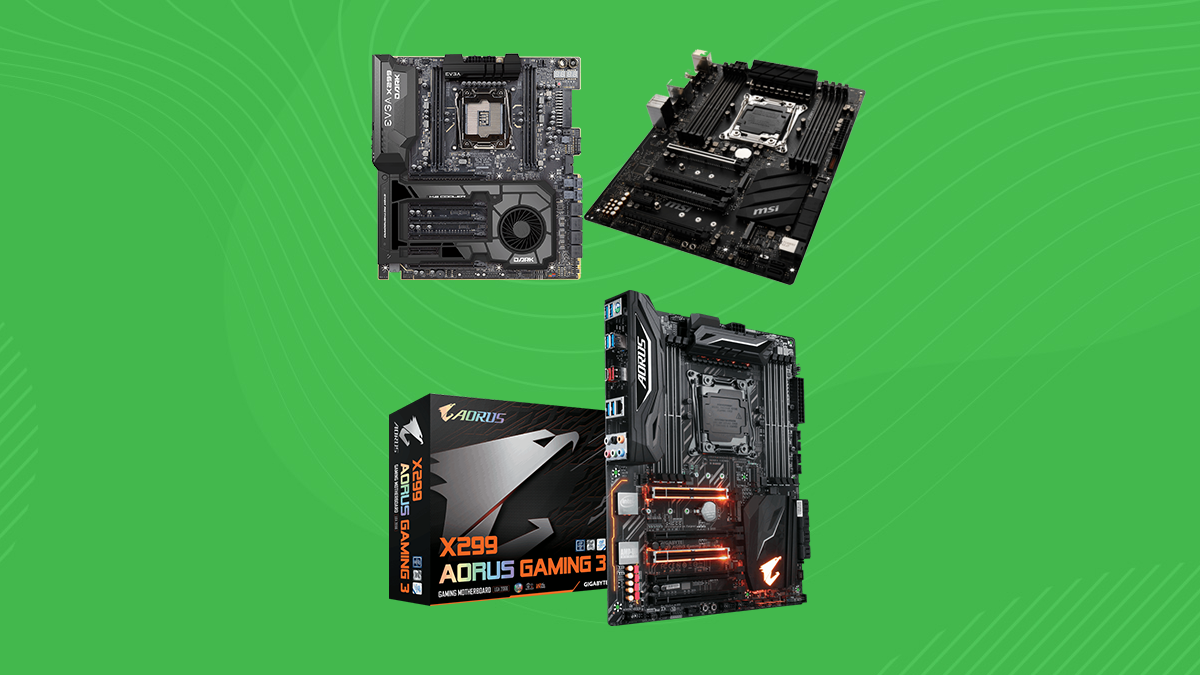 X299 motherboards allow up to double the amount of memory bandwidth than mainstream motherboards, offer many higher-core processors up to 18-core Intel Core i9-9980XE, and usually come with more ports and slots. We will be looking at the top-end X299 motherboards in this article which will provide you with a lot of attractive features.

ASUS ROG Rampage series motherboards are the premium motherboards for HEDT systems and offer top of the line performance and features. Among the bunch of Rampage variants, Rampage VI Extreme Omega is the best motherboard and comes at a high price which is why only the extreme enthusiasts are interested in this product. The motherboard offers simplistic heat-sinks allover the board but the RGB-lighting looks stellar. The motherboard also provides an OLED display, supports 10-Gbps LAN, DIMM.2 slot, and Fan Extension Card II, which are the unique features of this motherboard.

The motherboard provides whopping ten USB 3.1 Gen1 and three USB 3.1 Gen2 (2 x Type-A + 1 x Type-C) ports at the rear and a 10 Gbps LAN port through Aquantia AQC-107 controller. There’s also a Clear CMOS button at the rear for ease of use and the audio jacks are LED-illuminated.

On the board, we see six SATA3 ports, a U.2 port and two M.2 slots where one of them supports up to 2280 size and the other supports up to 22110 size. The user can also make use of the DIMM.2 add-in card to install more M.2 drives. There are two AuraSync RGB headers and three chassis fan headers on the motherboard. You should not get the wrong idea here as there are additional six fan headers, three thermal sensor headers and three RGB headers on the Fan Extension Card II.

Featuring an 8-phase VRM design with twin power stages, which is actively cooled by a massive heat-sink and two fans, the motherboard provides enough power to overclock even the 18-core processor to an extent where you will be thermally throttled. The motherboard provides two 8-pin ATX power connectors for overclocking the processor, although the second one is optional and should be used when overclocking the processor to extreme levels. The motherboard supports up to 4266 MHz memory (overclocked) and the user can install a maximum of 128-GB memory.

We believe that this motherboard truly represents the capability of a HEDT system and provides tons of unique features which is why you should definitely consider this motherboard if you can afford the price.

MSI MEG X299 Creation is a premium motherboard by MSI for X299 platform and it is nothing short of features, especially for storage enthusiasts. The word MEG stands for “MSI Enthusiast Gaming” which indicates that this motherboard is among the best motherboards offered by MSI. The motherboard offers a unique look thanks to the huge heat-sinks and comes with a lot of accessories from which, the add-in M.2 card, Xpander Aero is just too impressive.

There are six USB 3.1 Gen1 ports and two USB 3.1 Gen2 ports (1 x Type-A + 1 x Type-C) at the rear. There is also a Clear CMOS button and a BIOS flashback button which is a good design decision and enables the user to easily modify the BIOS. The user can also install the add-in card, which provides two Thunderbolt ports and two DP 1.2 ports.

As for the storage, capabilities are concerned, the motherboard supports eight SATA3 ports, one U.2 port, and three M.2 slots while there is space for four additional M.2 devices on the Xpander Aero add-in card. The motherboard also supports eight 4-pin fan headers, which are going to be more than enough for most cases.

The VRM of the motherboard offers a 13+1 phase design which seems overkill for most scenarios and allows supreme overclocking support. There are three 8-pin ATX power connectors on the motherboard, allowing a heavy overclock and the motherboard supports up to 4200 MHz memory frequencies.

MSI MEG X299 Creation offers great value among the premium-quality X299 motherboards and the price can easily be justified by accessories offered by it. Therefore, this motherboard is well-suited for people who want an “All-In-One” package for various needs.

EVGA X299 DARK is a motherboard which specializes in the overclocking department and every feature is oriented for an enthusiast-level overclock. The overall looks of the motherboard are fairly simple and an important thing to note here is that the motherboard uses a heat-sink with aluminium fins for the VRM along with two small fans for actively cooling it. The motherboard offers only four DIMM slots, which was intended for a supreme overclock as equalizing the number of channels with the number of memory sticks results in greater clock rates.

The motherboard offers a total of eight SATA3 ports, two U.2 ports and three M.2 slots where one of them is an E-key slot while the remaining two are M-key slots up to 22110 size. The fan on the SouthBridge heat-sink is also responsible for pushing air towards the M.2 slots which lead to better thermals than passive cooling. There is a total of seven fan headers on the motherboard where two of them support only PWM mode and five of them support both PWM and DC modes.

If you want to make records in the field of overclocking and want the best of the best motherboard for such a goal, then you have reached the perfect place and EVGA X299 DARK is an overclocker’s dream.

GIGABYTE X299 DESIGNARE EX is the companies revision of the X299-based motherboards and this motherboard comes with a new VRM, improved cooling solution for the VRM and a new theme. The heat-sinks provide a gray theme with blue LED lighting by default, although the lighting is RGB and can be changed by the user. The motherboard uses reinforced RAM and PCIe slots to provide durability and this also improves the looks of the motherboard as the heat-sinks are already grey in colour.

The motherboard uses an integrated I/O shield and at the rear, we see only four USB 3.1 ports, although this is one of the only motherboards providing native support for Thunderbolt3. There are also two DP-In ports at the rear which can get handy in various situations.

The motherboard offers eight SATA3 ports and three M.2 slots, where two of them support up to 2280 size while the remaining one supports 22110 size. All three M.2 slots come with the heat-sinks so that the devices do not get thermally throttled. There is a total of eight fan connectors where one of them is used by the fan covering the VRM heat-sink.

There are 6-phases being doubled up leading to an effective 12-phase VRM which seems enough for high-level overclocking while there are two 8-pin ATX power headers on this motherboard.

ASRock X299 TAICHI XE is the successor of the previous king of ASRock motherboards, the ASRock X299 TAICHI and offers various improvements such as improved power delivery and VRM cooling. The motherboard provides unique looks with the SouthBridge heat-sink having the shape of a mechanical gear. This is the signature of Taichi motherboards and looks absolutely amazing inside the case.

There are four USB 3.1 ports at the rear in addition to one USB 3.1 Gen2 Type-A port and one Type-C port. The motherboard also provides buttons for BIOS Flashback and CMOS clearing, along which there are two headers for antennas which can be used for WIFI.

The storage options of this motherboard are quite impressive with a total of ten SATA3 ports and three M.2 slots ( 2 x M-key 2280 + 1 x M-key 22110), although there is no heat-sink over the M.2 slots and the high-end SSDs are likely to get thermal throttled. There are five fan headers on this motherboard, all of them operatable in both PWM/DC modes apart from the CPU fan header which supports only PWM mode.

The Taichi XE greatly improves the VRM over the predecessor and now provides a 12+1 phase design. The VRM cooling is also renovated and uses a thick heat-pipe which also covers the heat-sink above I/O ports. There are two 8-pin ATX power headers on this motherboard so that it can easily support overclocking on the top-end HEDT processors.

This motherboard keeps a great balance between features and price which is why it is an attractive product for people with a relatively lower budget, who want to design their ultimate HEDT system.