Ryzen 7, the wild card unleashed by AMD to strengthen their grip on gamer population with its splendid horsepower to run games at good frame rates in SLI as well as CrossFire GPUs. This CPU was not as strong as it’s Intel competitor, Kabylake, in single-thread performance, however, it easily stomped Kabylake in terms of other professional tasks like editing, programming, live streaming, etc back in the time. The bottom line being this CPU a better choice for many due to its well-rounded features making it a more reasonable investment for the most. 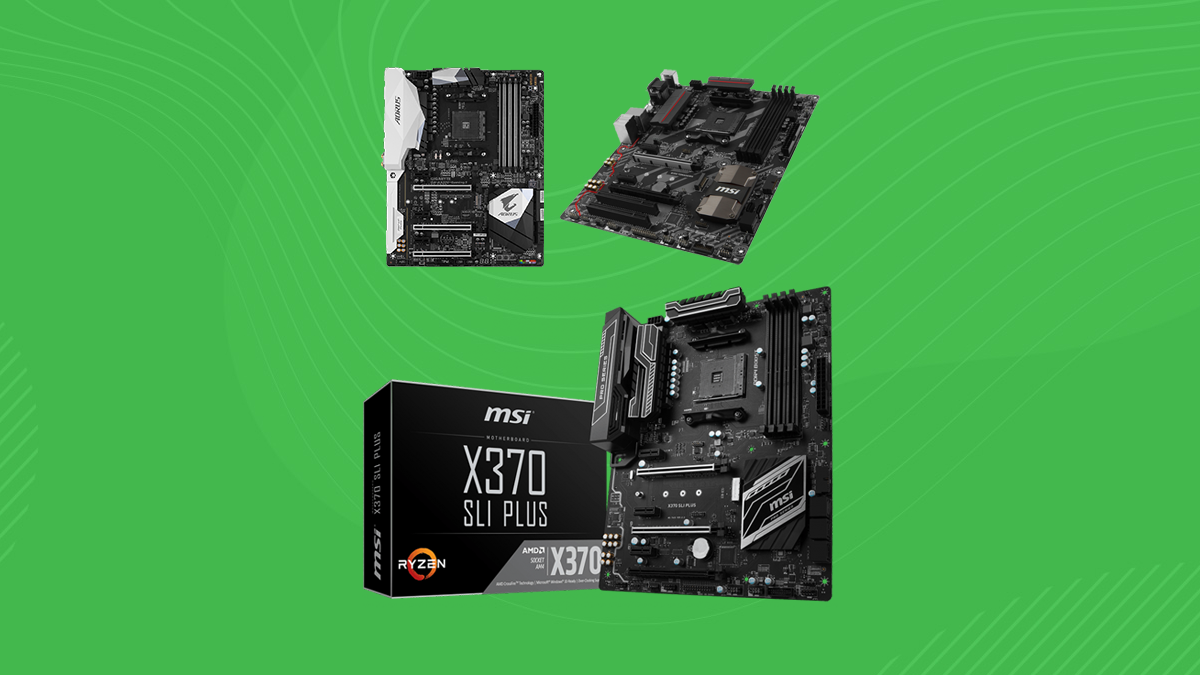 It supported AM4 socket which comes equipped on several series of chipsets namely; B350, a more budget board with sufficient features to pull the cart of your demanding system; X370, a beefy chipset with a bump over B350 in term of additional GPU support for SLI and better features at a higher price tag.

This bad boy secures the top spot with a versatile set of features and a stable WIFI. Its onboard 802.11 AC WIFI easily matched the throughput of our Ethernet which is just outstanding. In terms of connectivity, it brings a lot to the table with  NVMe M.2, onboard 802.11AC WIFI, Gigabit LAN, front panel USB 3.1 port and USB 3.0 port.

The dual patent-pending SafeSlots confer strength to the PCIe slots against heavyweight GPUs and cards. Hearteningly, it comes with holes for both the AM3 and AM4 coolers, therefore, you don’t need upgrade kits for installing older coolers. It supports up to 64 GBs of DDR4 RAMs running at max speeds of 3200 MHz.

ASUS never slacks off on aesthetics. The board is loaded with AURA Sync RGB LEDs on the top and rear I/O cover, as well as inside the chipset, and we also have the AURA headers to plug in some LED strips which will sync perfectly with ASUS graphics cards and other AURA sync products. Easily overclockable BIOS is commonplace for ASUS motherboards at this point. You can easily sift through the settings to adjust fan curves and overclock profiles (Auto-Tuning and FanXpert 4), you just have to click it and it will auto-overclock for you, or you can just manually overclock yourself by diving into the in-depth settings as well.

Of note, you are advised to update the BIOS to the 1701 version to weed out any possible overclocking issues. On the right-hand side of the board, there is a debug LED display at the top which proves very useful for overclocking by notifying you if anything goes wrong. Below them, we can see 3D printing mounds. Moreover, it features sublime audio set up with its 8-channel HD and ROG exclusive SupremeFX S1220 backed by Japanese capacitors. There are few LED connectors for the new Wraith coolers with RGB built into them and one at the bottom for external LED. You are advised to go to the ASUS’ website to look at the QVL for add-ons for better build quality.

Overall, this is a downright high-end motherboard for your 1800x processors stacked with impressive lightings and a set of features optimized for top-notch overclocking. If you don’t want to compromise on quality, go ahead and give this beast a tap.

It is a well-rounded X370 chipset boasting high-end features among its X370 brethren and other Fatal1ty motherboards. Its connectivity comprises of two steel-reinforced PCI-Express 3.0 x16 Slots which supports SLI and CrossFire and a 4x PCI-Express 2.0 x1 Slot.  One M.2, One Ultra M.2, SATA3 Ports. It has four DIMM slots for the DDR4 memory card which can house up to 64 Gbs in capacity and up to 3200MHz + (OC) of running speeds. You just have to change the RAm settings in BIOS to XMP profile to draw out 3200MHz speeds.

This board features a red and black theme throughout which is complemented by a nice array of RGB LED colour schemes amenable to free customization per user’s taste and mood. You can connect the LED strips to the LED headers to conceive a unique style of your liking. You can download the ASRock RGB LED utility from the ASRock App. ASRock has conditioned this board for all the latest water cooling pumps by installing CPU fan headers which also support water pumps.

You can adjust the voltage of the water pump to acquire higher cooling performance at lower noise levels. It has premium audio set up consisting of 7.1 HD Audio of Realtek ALC1220 Audio Codec which is backed by Creative Sound  Blaster Cinema which delivers a smooth audio experience during gaming, movie watching, and whatnot.

Its BIOS enjoys regular updates with modest settings which may not have mind-blowing overclock settings but enough power in them to comfortably touch the mark of 4.1 GHz on the Ryzen 7 processor. On a side note, you are advised to update your Windows 10 to the latest version to avoid any unresponsiveness from the board. Lastly, this board suffers the absence of dehumidifier options in its BIOS, therefore you will have to manually blow the exhaust via a hair drier, etc under humid conditions.  It encompasses a host of software by ASRock such as ASRock’s f-stream, RGB LED software, ASRock’s up-charge, ASRock’s key-master and many more.

It rightfully lives up to the rubric of “ASRock’s current flagship motherboard” by conferring high performance, high specs, and the all the bells and whistles to pay off the extra cash you’re forking over for it.

Meet another ASUS board, ASUS ROG Strix B350-F Gaming, an easier pill to swallow if you are concerned with the budget woes coming with expensive boards. This motherboard lands at the perfect spot for a budget build with all-inclusive features which override the previous Pro gaming series by ASUS.

It has ample connectivity with two PCIe slots, NVMe M.2, USB 3.1 Type-A connectors along with a rich I/O comprising eight USB ports (four USB 3.1  Gen 1, two 3.1 Gen 2, and two 2.0), DisplayPort 1.2, and HDMI 1.4 PCIe brackets are reinforced under the rubric of SafeSlots to ensure their strength.

This board supports up to 64 gigabytes of memory capacity across all four DIMM slots with speeds up to 3200 MHz. Be careful while using all four DIMM slots, the stock Wraith cooler presses up against the heatshield of the RAM sticks. It does not come with built-in WiFi.

Taking a look at the BIOS, it is smoother than cream with its one-click overclocking and it lets you easily tweak up the custom fan curves from different temperature sources with Fan Xpert 4, which automatically tailors your overclock profiles to the respective build for maximum OC performance, dialling in CPU and RAM overclocks, as well as other tasks. Furthermore, the impressive AURA Sync RGB lighting system is self-explanatory. It has two RGB headers with a plethora of colour spectrums running on all the AURA Sync enabled products.

To conclude, it is a great weapon of choice for the users seeking out moderate overclocking, sublime RGB lighting, ample fan headers, and I/O connections all coming under a decent price tag. It gives you everything unless you want to go full-throttle with your extensive overclocking and water-cooling for a prolonged span of time.

It is the ultimate value board for quenching your gaming needs without breaking your bank. It has all the salient weapons to do justice to your Ryzen 7 processor.  It has adequate power delivery for moderate overclocking up to 3.8 gigahertz on all cores, especially for your Ryzen 7 processor, unless you want to hit above 4 gigahertz in second generation processors. In terms of connectivity, it has a Gigabit Lan, M.2 slot (can be used as a boot drive) working either as a SATA drive or NVMe drive, a peculiar USB DAC UP 2 ports which allows adjustable USB voltages with a dedicated power design, steel-reinforced dual PCIe Gen 3 slots (32Gb/s), two USB 2.0 headers and one USB 3.0 slot, two USB 3.1 Gen 2 slots, and more. It houses four DIMM slots for your RAM supporting up to 3200MHz.

As we can see, there is only one heatsink on the side o the boar o, we know that it is not meant for extensive overclocking. Before starting up the BIOS, make sure to update it to F7. The audio comprises of the beefy Realtek ALC 1220 audio chip, in contrast to the other counterparts in the same price bracket, this a remarkable plus for this board.

Overall, this is yet another great value for the money. It hovers between the high-end and mid-range board area with an appealing price tag and rich connectivity options.

This is a mighty fine mix of aggressive visuals aptly matched with robust performance coming at a heartening price tag. Everything residing on the PCB is lined with an aggressive red streak design. It has a rich continuum of connection ports like USB 3.1 Gen 1 Type-A, Type, golden audio jacks, reinforced PCIe slots, Turbo M.2 slot (up to 32Gb/s with NVMe support) and Gaming LAN. Its RAM slots are boosted by an adjunctive feature named DDR4 boost, an isolated memory circuit. There are four DIMM slots supporting up to 64Gbs of DDR4 memory running at 3000MHz. We recorded core clocks of stable 3.9 Gbs on Ryzen 7 1800x on this board.

It is replete with a hefty load of fan headers for your high-end gaming and gives you solid control over cooling levels with DC/PWM mode, for optimal tuning and silence. Go ahead and tweak fan speeds, temperatures under 4 level targets, and the CPU fans. It is designed with latest cooling solutions in mind, you can throw all the heavy-duty cooling set up at this board and it will handle them easily with its water pump PIN header and whatnot. It doesn’t fall short in the RGB department either, you have complete control over the colour scheme through your smartphone or the MSI gaming app in a matter of few taps per your system style and taste.

Furthermore, you can enjoy in-game tools like Game Boost, Gaming Hotkey, and X-Boost. It has a useful LED debug which will notify you of any hindrance in proper CPU, graphics card, and RAM working. MSI has installed a straightforward BIOS that can be amped into automated overclocking in a single click, pretty handy for novices.

To conclude, if you are reluctant to splurge on an X370 board but looking for a board that can bear a considerable degree of overclocking, you have a sound investment in front of you.