One cannot overstate enough, the keynote value of RAMs for your system especially for gamers, video editors and server hosts. When we talk about memory in computers, SSDs are known to breath new life into your system, meanwhile, RAMs are the very lifeline of your PC. 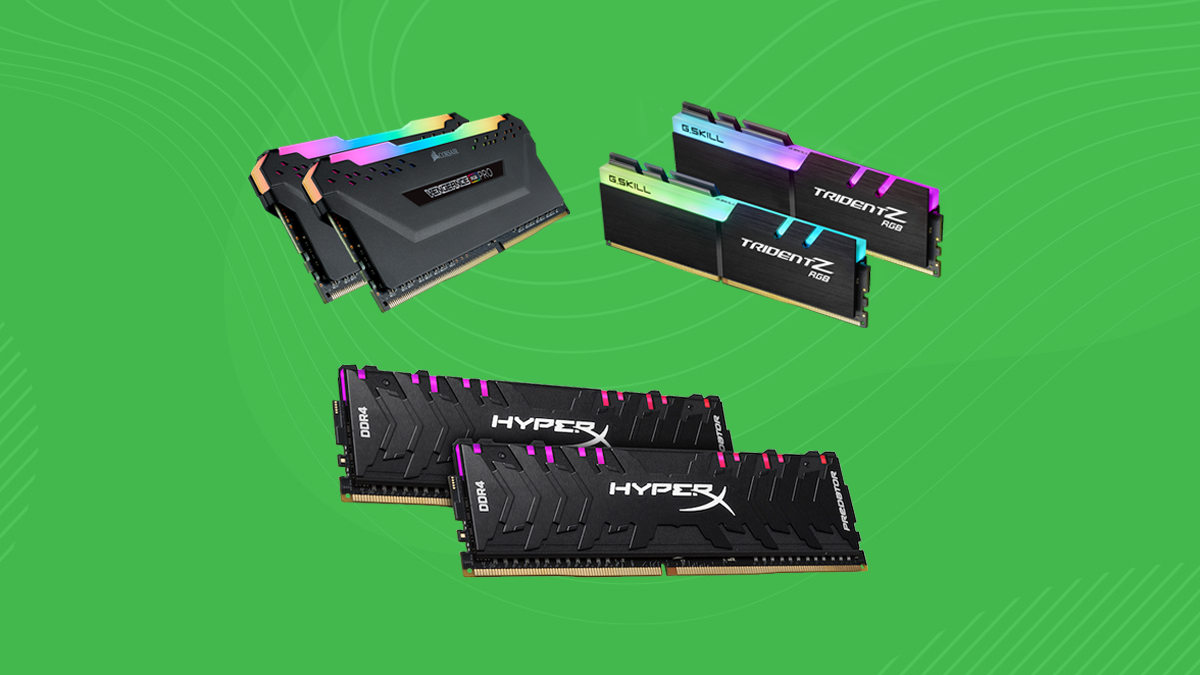 Choosing the right RAM isn’t as simple as it may seem, most people tend to flock around Kingston or Corsair storage devices, well, these manufacturers have well-deserved fame for their products. However, there are many striking RAMs coaxed out by other promising firms and it won’t hurt narrowing them down in your bucket list.

Kingston has reached a point where they no longer need to profess the credibility of their memory products, all thanks to their consistently reliable and cost-effective RAMs overmastering their competition. Their Hyper X Fury line of RAMs have amassed due recognition and their DDR4 RAMs preclude any doubt by staying true to their name.

You can pick from three colours namely, white, black and red to complement your system well. It has single module capacities of 4GB to 16 GB, while, kit capacities range from 16GB to 64GB. It is XMP ready and available in 2400MHz to 3466MHz speeds.

These higher-speed RAMs will definitely pay you off in games like BattleField 4 by amping up the frame rates. It has a CAS latency of CL 14 at 1.2 volts. It turns out, most of the motherboards fall back to conservative settings when they detect new RAM, so, you will likely have to enable XMP right after installation.

It embodies a low profile asymmetrical heat spreader design that includes speed holes for ventilation and cool visuals. Bumps on the spine of the heatsink are low profile making it compatible for larger coolers such as Noctua HD 14 and slim-case builds where tall spreaders won’t work.

All you have to do is to plug in your system and it will recognize the host platform and automatically clock itself to the highest frequencies (3466MHz) in line with the published timings by Kingston.

It is compatible with the latest Intel, AMD CPU technologies, however, in some AMD CPUs it will run up to the speeds allowed by the manufacturer’s system BIOS. Moreover, in AMD Ryzen, it will boot at JEDEC default speed latency with Fury.

In order to enable factory overclocking, speed and latency profile must be selected in the BIOS. This is the way to go when you want a quality RAM with heat spreaders and hearty cost per gigabyte performance.

Next up is Corsair’s lit up RGB centric RAM. Corsair’s one of those eminent manufacturers that shoulder Kingston in the world of RAMs and storage devises.

As we live in the era taken up by an RGB storm, Corsair came away with their mighty fine RAMs with appealing visuals to spice up your rig. It is available in single modules from 8GB to 16GBs and kit capacities of 2x8GB, 2x16GB, 4x8GB respectively. It will run from 2133MHz to 3200MHz.

This RAM worked with no BIOS issues on the latest BIOS’ of any motherboard as of this date. We confirmed a stable 3200MHz (CAS of 16) on it with 4 DIMMs, which is quite impressive.

XMP2.0 profiles allow for automatic, reliable overclocking at your fingertips. Moreover, it has an external connector on the module for you to link all the DIMMs.

Moving on to the main hype inspiring aspect of this product, the vibrant RGB lights. The RGB system is wireless to keep things clean and simple. You have to use the latest Corsair link 4.6 software to configure and program memory temperature, timings, frequency and a multitude of lighting effects like colour pulse, group delay, colour shift, rainbow and many more according to your taste.

Corsair Link enables you to sync it with other Corsair products and third-party applications like Aura sync from ASUS, RGB Fusion from GIGABYTE. It comes with Anodized black aluminium heat spreader and a removable top piece with perforated Corsair logo, it lights up as well. Rest assured, all these RGB will not hamper the performance of your RAM.

It is compatible with Z170, Z270, Z390, X99, which means, it supports both Intel and AMD platforms yet it is not QVL approved for Strix. To add one more point, make sure that you are using the latest version of the Intel management engine for it to work to talk to the memory properly.

Next kid on the block is this budget package for gentlemen who are afraid of breaking their banks. Ballistix is revered for its affordable and quality RAMs giving you a continuum of speeds of 2400MHz, 2666MHz and 3000MHz at CL16 latency running fine at 1.2 volts.

It comes in grey, white, and red colours. Ryzen seems to perform better on faster memory. If you have a motherboard that can support quicker RAM, and you want to get the most out of your processor, even on stock speeds, this may not be the choice for you.

Unlike other RAMs, it won’t overclock beyond its rated speeds but that is a fairly meagre concern. You have a plethora of capacity choices namely: single sticks ranging from 4GB to 16GB: Kits coming with 8Gb SR, 16GB SR and DR, 32GB, and 64GB kits with diverse capacity combinations.

It encompasses a digital camo heat spreader available in white, grey and red. When we talk compatibility, it will work just fine with Ryzen and Intel builds like Z170, Z270, Z370, X99, ASUS ROG Strix system. Basically, it can go with systems that take DDR4 2400MT/s UDIMM memory right out of the box.

It is a low profile RAM allowing you comfortably fit in most CPU air coolers above and around it, however, some CPU coolers will restrict access to the memory slots on certain motherboards. Our Ballistix modules vary in height, depending on the model. We highly recommend confirming the amount of space you have available. To optimize your Ballistix memory, you will need to enable XMP in your system’s UEFI/BIOS.

You are advised to refer to your owner’s manual for instructions specific to your system. One thing to keep in mind is that Ryzen seems to perform better on faster memory. If you have a motherboard that can support quicker RAM, and you want to get the most out of your processor, even on stock speeds, this may not be the choice for you.

It may not be the fastest DDR4 around but as far as the price per performance concerned, it can easily body its premier competitors.

Corsair makes it to the list yet again with their Vengeance series, basically, Vengeance LED was followed up by Vengeance RGB to add something different to the aesthetics game. This is an endless feast for LED lovers, coming with splendid white and strong red colour.

When we say red, it really is a strong blood-red without any fading or pinkish hue, and this is pretty brilliant from Corsair to quench your visual needs. Single-stick densities of 4GB, 8GB, and 16GB, while the kit capacities constitute 16GB, 32GB and 64Gb in a different combination of single modules.

The LED illuminated modules to display various flashing patterns and for that, you’ll need 4.3 version of Corsair Link software and you can make it do slow pulses, steady red, as well as control the light intensity. However, you cannot change the colour. You can have white, blue and red LED colours which are absolutely spot on.

Moving on to the heatsinks, anodized aluminium heatsinks give off an aggressive feel which effectively dissipates heat through their large surface area. Keep in mind that it is not a low profile RAM compared to the aforementioned RAMs so you are advised to make sure you have enough space by examining your CPU coolers and components. It is optimized and compatible for latest Intel X99 and 100 series, as well as on Ryzen builds, easily running on MSI mortar z170 and other boards.

However, it is incompatible with Apple iMac so make sure your components are compatible with this RAM. Check the motherboard page for RAM support so you don’t have to wait for BIOS updates. All in all, it is a fine addition to your arsenal to take your rig to the next level.

If you’re looking for a word to sum this RAM up, “Versatile”, does the best job. Everything from name, visuals, and performance is satisfyingly versatile. It comes in single module capacity of 8Gb and kit of 16 GB with CAS latency of 16-18-18-16 running at a voltage of 1.35 Volts.

Its frequencies measure up from 2133MHz to 3200MHz and unlike above RAMs, it strictly remains under these values instead of going above them. You will get every last bit of advertised speed with a stable 3200Mhz under XMP 2.0. It is low profile to free up headspace for large coolers.

When you take a look at its RGB lighting and design, you’ll feel that it is designed with gamers in mind. Its giant and angular aluminum heat sinks are both sturdy and good looking with massive Viper logo on the sides. They are smudge resistant that comes from fingertips and oils.

Installation is a breeze despite the DIMMs feeling slightly thicker than the normal. Moving onto the main highlight of this ram, the RGB, it has a rainbow-inspired light show at its default settings. The software is easily customizable and simple to use, you can keep 5 profiles saved with your favorite lighting effects and you have full control over lighting zones and speeds allowing you to design quite a few very good looking effects.

Its RGB lighting is sync-able with Aura sync (ASUS), Mystic light (MSI), polychrome (ASRock), and RGB fusion (GIGABYTE). It tends to fall out of sync when you close off the software or shut off the computer requiring you to reboot it manually with the Windows when you turn your computer back on.

Overall, a dashing looking RGB, good software and RAM perform even better with a price tag almost same as its non-RGB counterparts, so there isn’t anything that could go wrong with this bad boy.