The AMD Ryzen 7 3700X is one of the most powerful and most versatile CPUs in AMD’s Ryzen 3000 series. This CPU is based on AMD’s acclaimed 7nm manufacturing process and packs 8 cores and 16 threads which makes it an excellent all-rounder for both gaming and streaming. Even in 2021, not only is it a powerful 8-core CPU that can handle the most demanding games at high framerates, but it is also one of the most impressive multi-tasking processors currently available on the market. 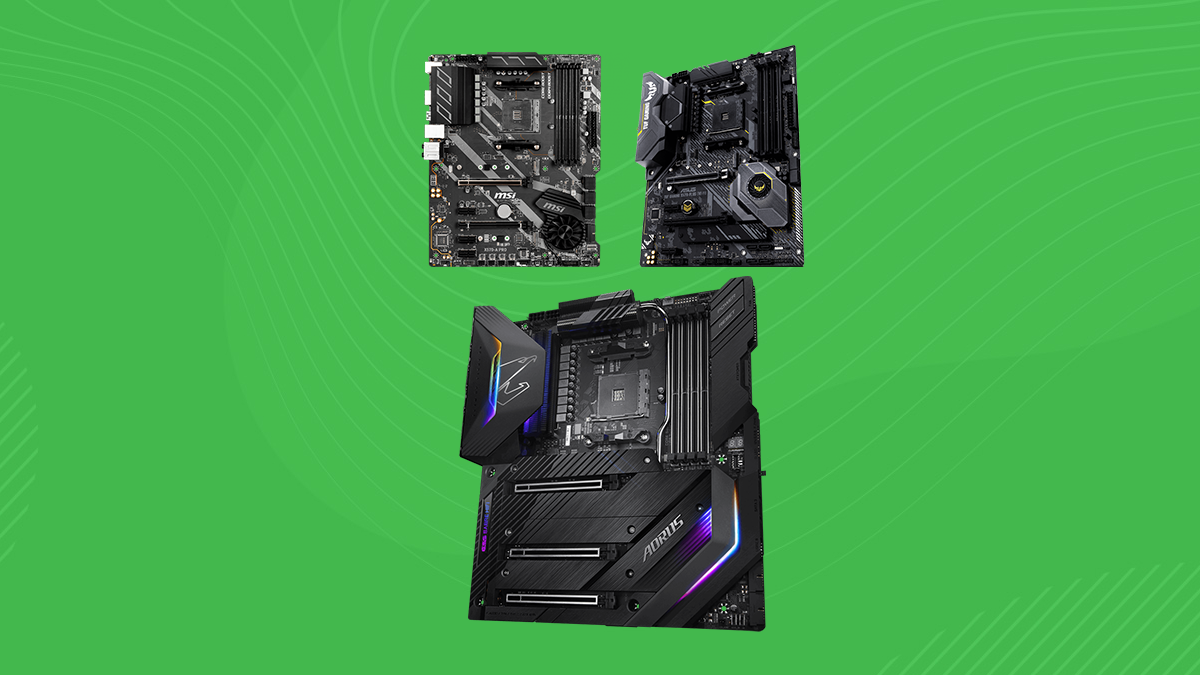 The Ryzen 7 3700X is a high-end processor and thus, is best paired with a powerful motherboard that can handle the power draw of the 3700X. Especially when overclocked, the Ryzen 7 3700X requires a clean, stable current from the motherboard’s VRM for it to hit high clock speeds in a stable fashion. This means that the motherboard choice for the 3700X matters a lot and should be considered carefully if you are building a new gaming PC with the Ryzen 7 3700X in 2021. Robust VRM design is our priority for the 3700X, but we are also looking for high-end features such as multiple M.2 slots, numerous USB ports, and high RAM compatibility.

Our recommendations for the Best Motherboards For Ryzen 7 3700X

The Crosshair series from ASUS is the flagship motherboard lineup that targets overclockers and offers some extremely sturdy and premium boards. The ASUS Crosshair Hero is one of the more reasonable boards in this lineup but still packs a premium punch for even the most hardcore of overclockers. It does omit some really niche features from other Crosshair boards, but those are not really necessary when paired with the Ryzen 7 3700X.

The Crosshair Hero VIII features 4 DIMM slots which can support a total of 128GB of RAM and frequencies of up to 4800 MHz. Not only that, strong VRM can handle memory overclocking as well. Speaking of the power delivery, the Crosshair Hero packs one of the most robust VRM designs of any X570 motherboard, and one that is ideal for extreme overclocking. The motherboard’s powerful 8-phase VRM design enables it to handle the Ryzen 7 3700X with ease, even when overclocked. In addition to that, ASUS has also included plenty of nice-to-have features such as BIOS Flashback, onboard thermal sensors, onboard power button, and reset switch.

Moving on to storage, the Crosshair Hero VIII can support a pair of NVMe drives, both of which support full PCIe Gen 4 operation thanks to the PCIe lanes provided by the Ryzen 7 3700X and the chipset itself. SATA storage is also taken care of by the 8 onboard SATA ports which can be used to plug in SATA SSDs or mechanical hard drives. Additionally, the board also features 10 USB Type-A ports, a USB Type-C connector for the front panel, Gigabit Ethernet, as well as WiFi for wireless connectivity.

In terms of looks, the Crosshair Hero VIII does not disappoint either. It has a clean, color-neutral, stealthy look with big, extensive heatsinks over the VRM components. RGB implementation is tasteful and helps the user personalize the look of the board to their liking. I/O shield of the board is pre-installed, and M.2 drives are covered by full metal M.2 heatsinks which clean up the look of the board even more.

All in all, the Crosshair Hero VIII is an incredibly premium board from ASUS and thus demands a pretty premium price tag. While it might be a bit pricy in the first investment, it can prove to be worth it in the long run.

Continuing the list with another premium motherboard, we have the Gigabyte AORUS Master X570. The AORUS lineup has always provided some pretty solid motherboards when it comes to AMD chipsets, and the Master X570 is no exception. Armed with a superb 14-phase VRM design and premium components all over the board, the X570 AORUS Master aims to provide unrivaled overclocking performance.

The power delivery system of the AORUS Master X570 is certainly capable enough to handle a Ryzen 7 3700X even under heavy overclocks. The AORUS Master also has great memory support as it is capable of running 4 DIMMS up to 128GB, clocked as high as 4400MHz with memory overclocking. The board also features 3 PCIe Gen 4 x16 slots which support SLI configuration for two GPUs.

The AORUS Master is also very capable in other areas such as storage and connectivity. Gigabyte has provided 3 M.2 slots in this particular motherboard, which makes it a great choice for people with lots of storage devices. The only drawback of this feature is that only 4 SATA ports are available when all the M.2 drives are populated.

Aesthetically, the AORUS Master is certainly an attractive board, especially for the price. The board looks quite neutral and features large heatsinks over the VRMs and the chipset, and those help the board achieve a clean look. There is a small helping of RGB as well which is concentrated mostly on the IO cover adjacent to the VRM heatsinks. The lighting can be configured using Gigabyte’s RGB Fusion software of course.

Keeping that in mind, the AORUS Master X570 is certainly more than capable of handling the Ryzen 7 3700X. Its excellent power delivery system is able to keep the CPU fed with clean, stable power, and there are several other features as well that make it a fantastic option. The AORUS Master X570 should be your default choice if you can afford it.

MSI really dropped the ball with their initial X570 releases with boards like the X570A-Pro which delivered worse VRM performance than even the budget B450 offerings from rivals. This came as a nasty surprise for the enthusiasts of the brand that were used to some high-quality motherboard offerings from MSI in the past such as the now venerable MSI B450 Tomahawk. However, with the release of the X570 Tomahawk, MSI aimed to redeem itself and the whole X570 line.

As expected, the almost-magical “Tomahawk” moniker turned the X570 Tomahawk into a success. Featuring a VRM layout that rivals the much more expensive MSI X570 UNIFY and the aforementioned AORUS Master X570, the Tomahawk is powerful enough to handle any AMD CPU, even today in 2021. This makes it an excellent option for the versatile Ryzen 7 3700X, as enthusiasts should have no problem hitting high overclocks with this board.

In terms of features, the X570 Tomahawk is adequately equipped. MSI has included an 8+4 pin ATX 12V CPU power connector to allow the CPU more power for overclocking. 2 M.2 Slots are also provided, both of which support PCIe Gen 4 technology. Plenty of USB ports, SATA ports, 2.5 GbE Ethernet, and Wi-Fi are also included in the X570 Tomahawk in terms of connectivity.

As far as aesthetics go, the MSI X570 Tomahawk looks like it was designed with a tank in mind. It sports a plain, rugged design that does not look unattractive, however, it offers nothing special for enthusiasts as well. The RGB strip is placed on the backside of the motherboard which is also a questionable placement since it can’t be seen clearly in that position.

The MSI MAG X570 Tomahawk is a versatile motherboard with a really overbuilt VRM design that should perfectly suit the Ryzen 7 3700X given its value proposition. Although it does lack some bells and whistles when compared to the more expensive options, its lower price makes it an absolute bargain in 2021.

One For SFF Enthusiasts

If you are looking to pair the Ryzen 7 3700X with a Mini-ITX board for a compact SFF build then the ASRock X570 Phantom Gaming ITX board is the one for you. Pairing a mini-ITX board with a powerful and versatile CPU such as the 3700X opens up a world of possibilities in terms of performance and choice.

The X570 Phantom Gaming ITX has one of the finest VRM designs of any X570 board, let alone any mini-ITX board. The board can handle the Ryzen 7 3700X quite easily, which is a remarkable feat considering the size and form factor. The Phantom Gaming X570 also features 2 DIMM slots with support for 64GB RAM running at up to 4533 MHz frequency. There is a single PCIe Gen 4 graphics card slot on the board, which should be enough for most people as well. ASRock has also included 1 PCIe Gen 4 M.2 slot and 4 SATA ports for storage, while Thunderbolt 3, Gigabit LAN, and Wi-Fi also make up the list of features.

In terms of aesthetics, the board is nice-looking with some aggressive red and black accents on the IO cover and the various heatsinks on the board. There is a bit of RGB lighting present at the lower end of the board as well, which enhances the customization potential a bit. However, being a mini-ITX board, the focus lies more on the form factor and size rather than the aesthetics as far as enthusiasts are concerned.

All in all, the ASRock X570 Phantom Gaming can be a perfect partner for a Ryzen 7 3700X if you are looking to build a compact, SFF mini-ITX build. Not only does it have great power delivery, but it also provides plenty of features that one would otherwise miss by going with the mini-ITX form factor, which makes it an excellent buy.

An Attractive B550 Option

Possibly the best thing about the B550M Mortar is its impressive VRM design. Although with a price tag of around $150, the MSI B550M Mortar is certainly not a premium motherboard, it carries a very impressive power delivery system for the price. Even overclocking the Ryzen 7 3700X with moderate limits should be perfectly doable on the B550M Mortar. The 8+2+1 phase design would pair nicely with this CPU to form a mid-range to high-end build in 2021.

Features are also plentiful in the B550M considering the price point. The board is in the micro-ATX form factor but still contains 4 DIMM slots which can support 128GB of RAM running at up to 4400 MHz speeds. There are 6 SATA 6GB/s ports on the board along with 2 M.2 slots, which is again impressive for a B550 mATX motherboard. MSI has also provided 2.5 GbE Ethernet in the Mortar, but there are no Wi-Fi capabilities in the board, and the USB ports are quite a few in number as well.

While it may not be the most premium option on the market with all the bells and whistles, the B550M Mortar from MSI would make a perfect pair with the Ryzen 7 3700X if you are shopping on a fairly tight budget. Even at this price point, the B550M Mortar packs a strong punch and delivers excellent value, even if it has a few features missing here and there.

What makes a motherboard good?

Although the Ryzen 7 5800X is one of the fastest gaming CPUs currently available, it does not justify an upgrade from the Ryzen 7 3700X. Both the CPUs have 8 cores and 16 threads, and the gaming performance of the 3700X is also excellent, although not quite at the level of the 5800X. Nonetheless, this upgrade does not justify itself.

Do the motherboards listed above support Ryzen 5000 processors?

Yes, all the X570 and B550 motherboards support Ryzen 5000 processors, although some might require a BIOS update.

Which brand’s motherboards are the most reliable?

One should always prefer particular products over brand loyalty. Every brand makes good and bad products, and generally, it is best practice to check the reviews of the motherboards beforehand, in order to make an informed purchase decision.