The ‘Your account has been locked’ error appears when some Xbox One users attempt to Log in with their Microsoft account on their console. The error message is accompanied by the error code 0x80a40014. Affected users are unable to access any digitally owned games or retrieve any saved game data from the account. 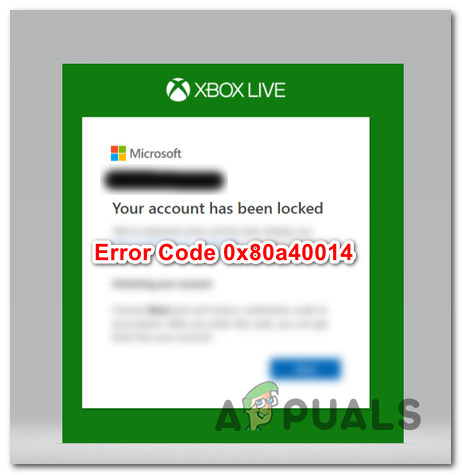 As it turns out, the ‘Your account has been locked’ (0x80a40014) error can also occur due to a server issue that is beyond your control. After investigating the issue, we determined that this issue has happened a few times in the past.

In each occurrence, Microsoft eventually confirmed that the problem was being caused by a server issue that ended up automatically blocking or disabling a wide array of Microsoft accounts due to false positives. Fortunately, whenever there’s an issue of this kind, Microsoft is typically quick in announcing the problems.

If this scenario is applicable and you’re suspecting that you might be dealing with a server issue, you should start by checking the official Microsoft Xbox Live status page (here). Open the status page with your default browser and see if any Microsoft services are affected.

If you manage to find evidence that some services are affected (especially Xbox Live Core services), chances are the issue is beyond your control. You can also check the official Xbox Twitter page and look for any announcements regarding this issue.

In case Microsoft is indeed having issues with registered accounts, there are no viable fixes for this particular issue. The only choice left in this case is to wait patiently until the issue is resolved.

You can still use your console, but you need to switch it to Offline mode and limit yourself to single-player games and digital content that was already verified. Follow the method directly below for steps on switching your console to Offline mode.

Multiplayer games, streaming services and any other app function that requires an Internet connection will no longer be available while Offline mode is enabled.

If you understand the consequences and you want to go ahead with the potential fix, here’s a quick guide on switching your console to Offline mode:

In case the issue wasn’t applicable or you’re still encountering the same ‘Your account has been locked’ (0x80a40014) error, move down to the final fix below.

As it’s been confirmed by several affected users, the issue can also occur locally due to the locally stored cache file that is fooling your console’s OS into thinking that the account is locked without even checking with the Microsoft server.

Several affected users that also encountered the issue locally have managed to get the issue resolved by deleting the profile from their console, performing a power cycling procedure and then re-downloading the profile black on the system.

Here’s a quick guide on doing this on a Xbox One console:

If the same ‘Your account has been locked’ (0x80a40014) error is still occurring when you try to log in with your Microsoft account, move down to the next method below.

If none of the potential fixes above have allowed you to find the reason why your account has been restricted, the only viable course of action by now is to contact the support team of Xbox.

If you don’t want to wait, you can start by getting in touch with a virtual agent. Provide the error message and error code, and you will be given a series of troubleshooting steps that you should follow to resolve the issue. To get started, visit this link (here) and click on Ask a question.

If you don’t mind the waiting times, you can get in touch with a live Microsoft agent that will happily look into the matter for you.

But keep in mind that phone support is notoriously slow and works around a fixed schedule. If your time zone is not really compatible with PT, your best choice will be to use the Webchat option (available 24/7).

Then, at the next window, click on Get help with sign-in issues and choose the preferred way of opening a support investigation on your account.