Linux Distros are important tools that help developers by compiling source codes from open source projects however sometimes after launching any Linux Distro you may encounter Wslregisterdistribution error failed with error 0x8007023e. Thankfully you’re not alone. 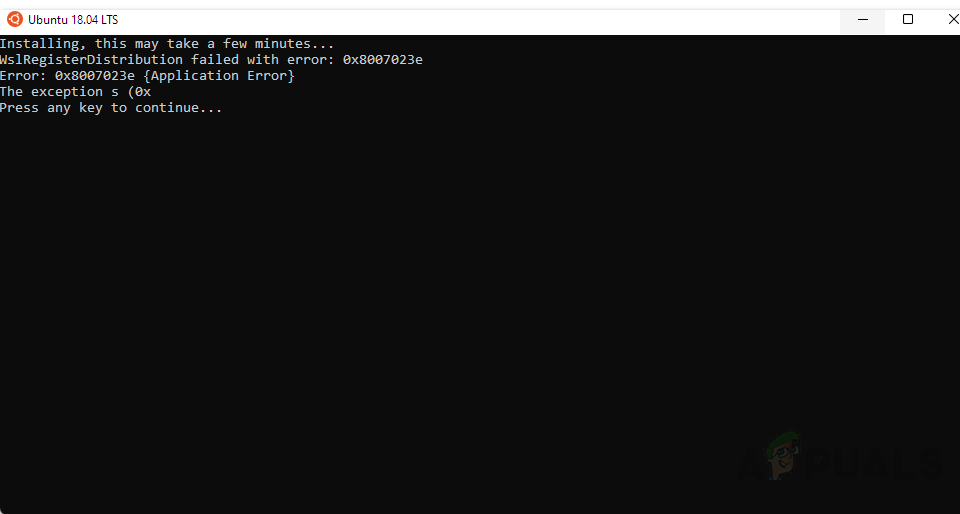 The Wslregisterdistribution error is a common and well-documented error, lets go over the potential causes for this issue.

Now that we know the most probable causes of Wslregisterdistribution error let’s go over how to fix them.

Many users reportedly fixed WslRegisterDistribution error 0x8007023e by Disabling all virtual machine-related settings and then Re-enabling them after rebooting their computer. This can be done through the “Turn Windows features on or off” feature via the control panel:

Provided this doesn’t solve WslRegisterDistribution error, simply move on to the next Fix.

Considering that the previous Fix didn’t work it’s possible your WSL itself is at fault, which requires us to do a fresh install on your device meaning we must first uninstall WSL.

How to uninstall WSL

Before you uninstall WSL it is important to uninstall any and all Linux distros before. After all Linux Distros are uninstalled we can begin the uninstallation process for WSL.

After completing these steps, we can move to remove WSL components disabling WSL and Windows Hypervisor platform in ‘Turn Windows features on or of’ as done previously. This completes the uninstallation meaning we can now move onto doing a fresh install of WSL for windows.

If you are running windows 10 version 2004 and higher (Build 19041 and higher) or Windows 11, then installing WSL is an extremely simple process.

This command will enable the required optional components and download the latest Linux kernel. After completion reboot, your device, install the Linux Distro of your choice, and launch to see if the error still persists.

If However, you are running an older build of Windows or just prefer not to use the install command then you can do it manually by following the steps below.

After completing the steps launch the newly installed Linux Distro and check if the WslRegisterDistribution error has been resolved. If the issue still persists however simply move on to the next fix.

Many users reported that Reinstalling their windows fixed their WslRegisterDistribution Failed Error. This unfortunately may be the only applicable fix for you. Before you perform a clean install for your windows make sure you have a backup in hand in case you need to revert back to your previous windows. After reinstalling windows, install and run Linux Distro hopefully without WslRegisterDistribution error.

Zubyan Gul
Zubyan is a Professional PC Gamer and a Systems Analyst. He has written numerous batch scripts for task automation to make his and others life easier.
Windows 11
Recent Posts
Close

How to Fix WslRegisterDistribution Failed with Error 0x8007023E?