Some users have been wondering if the wermgr.exe process is legitimate after discovering that the process keeps restarting and using a noticeable chunk of the internet bandwidth. This might not be an issue for users who are working with an unlimited bandwidth, but users with a slow & limited bandwidth are seriously affected.

Other users are reporting that the wermgr.exe process is causing close to 100% CPU usage. However, this occurrence is only known to happen on older Windows versions.

The wermgr.exe executable stands for Windows Error Reporting Manager. It’s a process responsible for handling errors produced within the Windows operating system. Its main purpose is to send crash and bugs reports in order to find out why your programs have crashed.

The main complaint that users have regarding the wermgr executable is that it’s eating gigabytes of bandwidth. Unsuspecting users might find that their limited bandwidth has been consumed due to wermgr.exe constantly restarting while an Internet connection becomes active.

Even though wermgr.exe is a Microsoft-signed file, it’s not in any way essential to the well functioning of your Windows Operating system. Because of this, users that are having bandwidth problems caused by the wermgr.exe process can turn the process off without repercussions.

However, before you jump to the conclusion that the process is genuine, it’s important to conduct some verifications. Nowadays, most malware programs are configured to mimic system processes with elevated privileges in order to avoid security scans, and the wermgr.exe process is one of the perfect targets.

One of the major giveaways of a malware in disguise is the process name. Open Task Manager (Ctrl + Shift + Esc) and locate the process. Once you do, make sure the name is exactly as it’s supposed to be. Names like vvermgr.exe or weermgr.exe are clear signs of a malware executable in disguise.

If you want to be sure that it’s a virus, right-click on the executable and choose Open File Location. If the revealed location is anywhere else than in C:\Windows\System32, you can probably assume that you’re dealing with a virus infection.

In this case, you should scan your system with a powerful malware remover software like Malwarebytes or Microsoft Safety Scanner. If you haven’t used one before, follow our in-depth article (here) on using Malwarebytes to remove malware from your system.

Once you eliminate the possibility of a virus infection, it’s time to treat the symptoms that will trigger the high CPU and bandwidth usage of the wermgr.exe process. If you’re looking for ways to tone down the usage, we have managed to identify a few methods that have helped users in a similar situation to resolve the issue.

Keep in mind that the wermgr.exe consuming a lot of bandwidth issue has already been addressed by Microsoft with quite a lot of hotfixes on all the recent Windows versions ( 7, 8.1 and 10).

With this in mind, it’s very important to make sure that your system is up to date with the latest Windows updates. To do this, open up a Run window (Windows key + R) and type “control update“. Hit Enter to open the Windows Update screen. 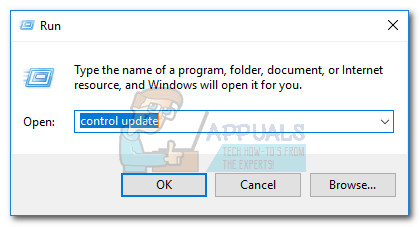 Once there, click the Check for Updates button and follow the on-screen prompts to install the pending updates and bring your system up to date. Once all the updates are installed, reboot your system once again and investigate whether the high usage of the wermgr.exe issue has been resolved.

Method 2: Uninstalling the app that is constantly crashing

This particular problem might very well be caused a 3rd party program that you recently installed. If the application in question is constantly crashing, Windows Error Reporting Manager (wermgr.exe) will constantly gather bug reports along with the affected files and beam them through to Microsoft. This will end up eating a lot of CPU resources and Internet bandwidth.

Note: Philips MediaServer is known for causing this error, but there’s bound to be other applications that will trigger the same behavior.

If you only started dealing with this problem recently, think about what programs did you install during that time. If you have any suspects, uninstall them by opening a Run window (Windows key + R), typing “appwiz.cpl” and hitting Enter. Once you’re in Programs and Features, uninstall the suspected apps systematically and reboot your computer to see if the issue has been resolved

Even though this procedure is not exactly recommended, you can actually prevent the wermgr.exe process from eating your CPU and bandwidth resources without breaking your operating system.

Altough disabling the wermgr.exe process is possible, you PC will lose the ability to send bug & glitches reports towards Microsoft. Also, it’s possible that you’ll stop receiving errors when certain applications are crashing.

If you decide to disable the wermgr.exe process, follow the steps down below:

If you ever decide to re-enable the service, just reverse engineer the steps above and change the Startup type back to Automatic.