Some users have been struggling to understand the purpose of the cimmanifest.exe process, especially after seeing the “Unsupported 16-bit application” or “The file or directory is corrupted and unreadable” errors associated with it.

Getting a message of this kind will likely mean that the “checking for update” ability has been affected. However, this will not affect your graphics card or your in-game performance if you remember to apply the latest GPU drivers automatically.

While most users agree that the file is not malware, additional investigations are required if you see that this file is using up a lot of system resource.

As it turns out, the legitimate cimmanifest.exe process belongs to AMD’s graphics software suite. This particular executable is included as part of the Radeon Software Crimson Edition.

Its purpose of cimmanifest.exe is to check for updates and prompt the user to install a new version whenever one becomes available.

Although we haven’t managed to identify any occurrences where the cimmanifest.exe was determined to be a virus, it’s certainly worth doing additional investigations if you find that the process is constantly using considerable system resources.

Note: Keep in mind that almost all malware programs are posing as processes trusted by operating systems in order to avoid security scans.

Finding out if you’re dealing with a malicious executable is particularly easy with cimmanifest.exe. The biggest giveaway is the location of the executable.

Now inspect the location carefully. If the revealed location is anything different than ‘C: \ Users \ *YourUsername* \ AppData \ Local \ AMD \ CN\’ folder, you’re probably dealing with a malitious executable. In this case, it’s highly recommended that you scan your system with a powerful malware remover. If you don’t have one at the ready, you can follow our detailed article (here) on using Malwarebytes to remove any type of virus infection from your PC.

As some affected users pointed out, the cimmanifest.exe contains a similar coding style as the feared Trojan.Delf.Win32 malware. Because of this, some antivirus suites including Avira and Mc Afee will report a false positive regarding the CIMMANIFEST.EXE executable.

If the cimmanifest.exe get’s flagged by your antivirus suite and you’ve previously determined that its location is correct, you have two ways forward. You either add the flagged AMD file to the exception list of your antivirus or you re-orient yourself to a different antivirus suite (preferably the built-in Windows Defender).

Removing the cimmanifest.exe process makes no sense whatsoever. Not only that you’ll lose the ability to be informed once a new GPU driver becomes available, deleting the executable manually might also break other features of the Radeon Software.

If you’re struggling with an error created by cimmanifest.exe, you’re best options are to either uninstall the whole Radeon Software suite or to follow the methods below in order to resolve the error messages.

If the cimmanifest.exe is producing the “Unsupported 16-bit application” or “The file or directory is corrupted and unreadable” errors, the following fixes might help.

We have managed to identify a few potential solutions that have helped users in a similar situation to resolve the issue. Please follow the methods below in order until you encounter a viable fix that resolves your situation.

AMD was relatively quick to release a hotfix for this particular issue. If you want to avoid reinstalling the whole AMD Radeon Software Crimson Edition suite, you can promptly apply the following hotfix in order to remedy the issue.

The hotfix is available at this official AMD link (here). Once you arrive on the page, simply click one of the download links, and open the installer to apply the hotfixes. 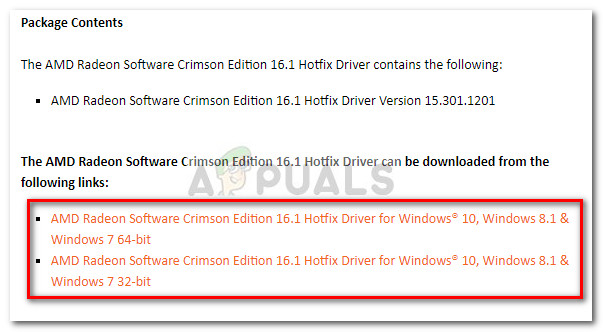 This will definitely resolve the errors associated with the cimmanifest.exe process and grant you access to new AMD features such as Radeon Overlay and AMD Link.