The Windows Task Manager‘s Processes tab, on all currently supported versions of the Windows Operating System, displays a list of every single process (both system and non-system) that is running on the computer at any given time. If you want to know where your computer’s resources such as network, RAM and processing power are being used, all you need to do is navigate to the Task Manager‘s Processes tab and see what process is using what amount of computer resources. When Windows users with NVIDIA GPUs navigate to the Processes tab of their computer’s Task Manager, they see three processes that are directly related to their graphics card and its functionality – two of these processes are named NVVSVC.EXE, whereas one is named NVXDSYNC.EXE. 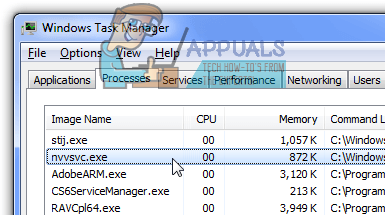 Windows users with NVIDIA graphics cards, upon seeing three processes that they know nothing about and which have nothing in their process description fields running on their computers, get understandably concerned about the security of their computers and their computers’ resources.  That being the case, these users end up wondering exactly what NVVSVC.EXE is and whether or not it should be removed or at least disabled.

However, unfortunately, there exists an issue faced by NVIDIA graphics card users where their graphics drivers or some other culprit causes the NVVSVC.EXE process to start using up absurdly large amounts of computer resources such as processing power and RAM. But even in such cases, disabling the NVVSVC.EXE process is not the way to go as that will cause your computer more harm than good. Instead, there are specialized solutions designed specifically to help users affected by this problem get rid of it, and the absolute most effective ones can be found in this guide.

What is NVVSVC.EXE and Should You Delete or Disable it?