We all remember the oh-so-popular Kermit the Frog. A puppet, designed by Jim Henson. It was loved by many in the Muppet Show. The same Kermit is fondly used by meme makers to make some really funny memes. And there isn’t just one kind of meme that fits Kermits expression the best.

How Did the Kermit Memes Start?

Initially, there was the ‘But that’s none of my business’ chapter, where memes related to this phrase always used Kermits picture. This began in the year 2014.The Kermit expression complimented the phrase and made it one of the most famous memes on the social media networks. Most of the Kermit picture showed the puppet drinking tea/milk.

The ‘But that’s none of my business’ series of Kermit mostly revolved around how Kermit was occupied with drinking tea or milk, while something happened around him. Showing zero interest in the things.

Then there were his Evil version, where he is in conversation with the evil side of him telling him to do stuff that he shouldn’t. By evil here, it doesn’t just refer to the evil things that people avoid doing generally. But it also includes things like being lazy, procrastinating or just doing something unethical.

Evil Kermit meme also show the things that we, as humans are scared to do. And would probably think twice before doing it. These memes make us realize that we have the ‘dark side’ and probably would be laughing it off with Kermit memes.

The same Kermit is used in different forms, like he is on the scooter (which is also known as the Scooter Kermit). A meme will be written with this picture, and will make it look even funnier.

Kermit Memes usually are on a very sarcastic theme. The purpose of such memes is to show the different side of Kermit which the world has not seen on the shows or the movies that he has appeared in.

By sarcastic here, we mean Kermit throwing in a remark related to someone’s action or their dress. Some of the Kermit memes also reflect how a person feels when they get super clumsy in front of someone and when the whole situation becomes extremely embarrassing.

Sarcasm always gives you a good laugh. And the image in Kermit memes shows the visual representation of sarcasm. And trust me, it is hilarious.

I am going to share the best ones so far and my favourite Kermit memes. Have a good laugh while you sip your cup of tea.

That is exactly how I feel when I just cannot take it anymore.

Well I have to say, the ‘eyes’ and the ‘grip’ says it all. Especially when you have done something wrong on the ‘mothers’ scale.

3. When They Won’t Stop Sneezing 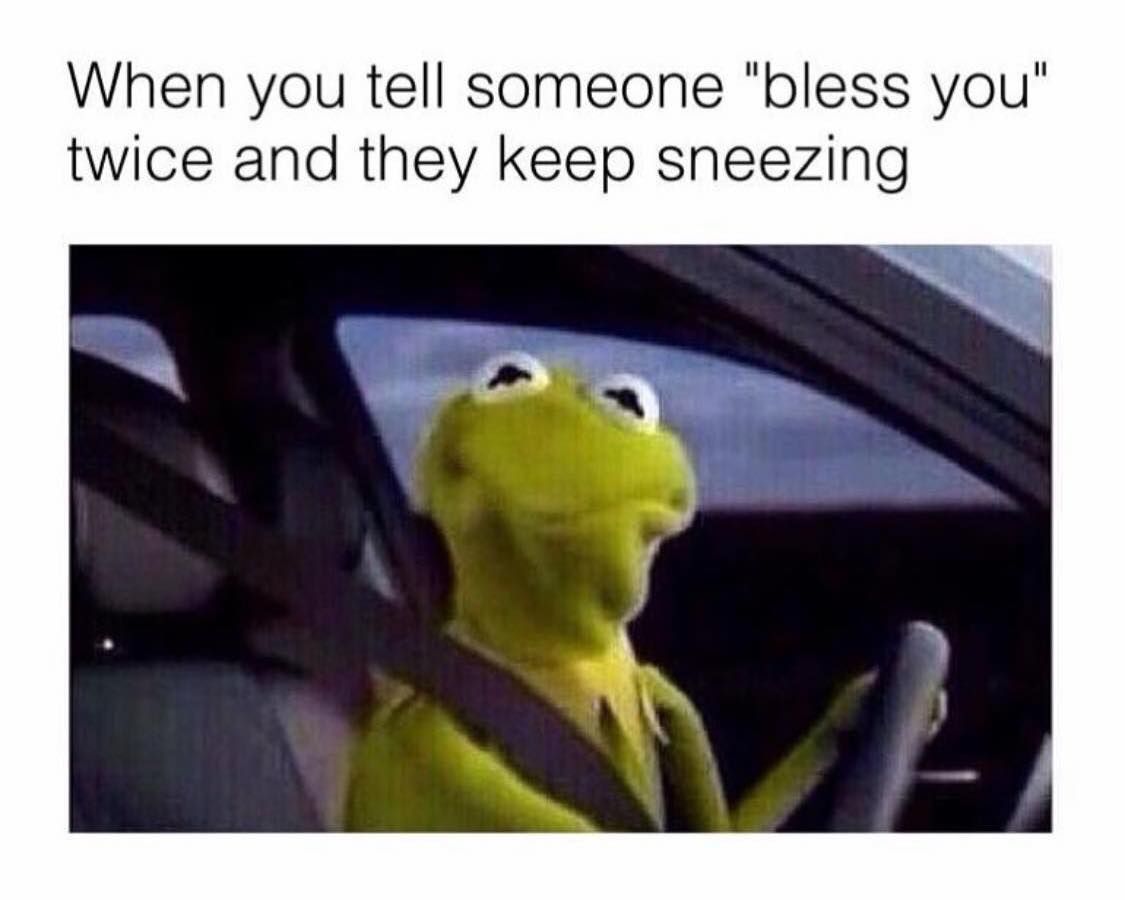 Are you done yet? That is just so relatable. You get tired to say ‘bless you’ every time they sneeze. Especially when they wouldn’t stop sneezing.

Feeling the blues? This one might just change your mood.

To the times when you don’t want everyone to invade your personal social life which on social media forums.  This is exactly what needs to be done.

6. None of my Business

This is to show how you don’t really care about what someone as important as a bank is telling you. Just fits the theme perfectly.

While this might seem a little sad, but it also is so funny. Just look at the sad Kermit.

That moment when you know you are in trouble and are not sure whether you should look at the person who caught you. This is exactly my expression when I get caught not working on my laptop but watching a movie instead.

9. Too Tired to Move

Have you ever felt like not doing a thing? And then you lie there on the bed, motionless. You are so motionless in that moment that people start thinking that you have passed out, for good.

That feeling is epic. When someone back at work, tries to play smart with you, but in the end, needs your help with their work. What goes around, I guess it really does come around.

I hate it when people blame their zodiac sign for being mean or rude or angry all the time. But guess what? It isn’t your zodiac sign, it’s you.

12. Let the Dark Side Decide

Happens all the time. You decide to do something good for a change, like maybe washing the dishes on time. But then, as they say it, we always find a reason to procrastinate.

Major love for reading, but writing is what keeps me going. Dream to publish my own novels someday.
Trending
Back to top button
Close
Close
Close