The ‘Hyper Transport sync flood error’ occurs during the initial startup screen, immediately after the user starts up the PC. The booting sequence then completes normally using the default values and it works fine with the only problem being that the date & time is reset after each system startup. 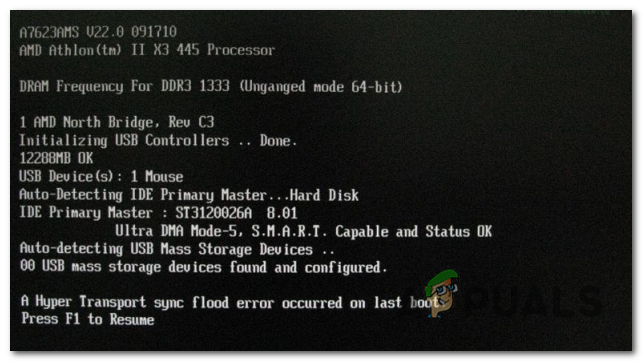 If you notice that the date & time is reset after each computer startup, the first suspect that you should have in mind is the CMOS battery. This small but important component is located on the motherboard and is typically a CR2032 button cell.

The CMOS (Complementary Metal Oxide Semiconductor) battery (also known as RTC or NVRAM) is responsible for storing information ranging from time and date to system hardware settings. An inconsistency caused by this component is typically signalled by the computer’s inability to maintain the date & time between startups.

If this scenario is applicable to your current scenario and you suspect that you’re dealing with a faulty CMOS battery, you should be able to fix the issue by clearing the CMOS battery or replacing it altogether in case the issue repeats.

Here’s a quick guide on doing this:

Note: The steps below should be applicable regardless of your Windows version or your PC configuration.

If you did this and you’re still seeing the ‘Hyper Transport sync flood error’ error at every system startup, move down to the next potential fix below.

In other cases, the sync flood error will be initiated in instances where the signals on the HT bus are in a state that makes the normal operations impossible to perform. As you can imagine, there can be many hardware faults that might cause this problem.

But in reality, in most cases, it will occur if the BIOS has configured the CPU or chipset incorrectly – most likely due to exaggerated overclocked frequencies that are causing general system instability. It’s also possible that due to your overclocking, your PC is unable to supply enough power.

A couple of affected users that were also dealing with this problem have reported that the issue was finally resolved after they reduced their overclocking frequencies for both their CPU and GPU. For starters, reverting to the default values will allow you to figure out if the problem is indeed occurring due to overclocking.

Once you manage to reset the overclocked frequencies to the default, do a couple of consecutive restarts and see if the ‘Hyper Transport sync flood error’ error is still occurring.

In case the same error message is still occurring at every system startup, move down to the next method below.

If you can’t do without overclocked frequencies and you previously confirmed that the issue is no longer occurring while you revert back to the default values, it’s almost certain that you need to upgrade to a more powerful PSU.

In case the current PSU is under-powered, you will keep encountering the ‘Hyper Transport sync flood error’ error. This happens because your system needs more power than your PSU is capable of supplying.

One potential way of fixing the issue without having to upgrade to a better PSU is to remove all devices that are not essential to the functioning of your PC (non-critical peripherals, additional HDDs, optical drives, etc.). Also, try to slightly bring the voltages down if you have overclocked your GPU or CPU and see if the issue goes away.

If this doesn’t work, you have no choice but to upgrade to a more powerful PSU that is capable of supplying enough power to your system.

In case you’re still encountering the issue or this method wasn’t applicable in your case, move down to the next method below.

As it turns out, this particular issue can also occur due to an improper or glitched version of your BIOS. ASUS had a BIOS issue of this kind that will ultimately end up triggering the ‘Hyper Transport sync flood error’ error at every system startup, even though the CMOS battery was perfectly healthy.

It’s entirely possible that your current BIOS version is causing the problem. If a new version is available, you should update it to the latest and see if the same problem is still occurring. But keep in mind that the steps of updating your BIOS version will be different depending on your manufacturer.

Typically, every manufacturer has its own proprietary software that needs to be used when updating BIOS. Asus has E-Z Flash, MSI has MFlash and the examples can continue.

If you want to update your BIOS version, start by looking for specific steps related to your particular model. But if you’re not confident in your technical abilities, the best way to go is to take it to an IT technician so you don’t run the risk of bricking your system.