Many Windows users have been affected by an issue where their computers fail to start up, and they are met with a black screen with an error message stating “No bootable device found” no matter how many times they try to start their computers up. This error message basically means that the affected computer was unable to gain access to the HDD/SSD that contains its boot information or that it scanned all connected HDDs/SSDs for boot information and did not find any. 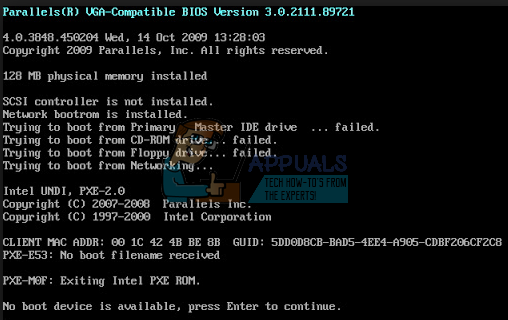 This problem has been known to mostly affect Windows 8 and 8.1, but there is nothing stopping it from preying on Windows 10 users. Not being able to boot your computer into Windows is, in and of itself, a pretty huge problem, and it only gets worse when combined with the looming thoughts of your installation of Windows going bad or your computer’s HDD/SSD failing. Thankfully, though, this issue can be fixed without even having to boot into Windows, but you are going to need a Windows installation disc or USB that contains installation files for the same version and architecture of Windows that is currently installed on your computer. Here’s what you need to do:

You should now arrive at the Startup Options screen. Once you are here, you need to:

Note: If you see an error message stating that there is not enough space for the new partition after running the last command, type the following commands into the Command Prompt, pressing Enter after typing in each one:

If the problem is not fixed, the root of the issue may be more severe – such as a failed or failing HDD/SSD. If that’s the case, you should have your computer looked at by a professional or, if it is still under warranty, send it back to its manufacturer to have it examined.

How to Fix “No Boot Device Found” Error on Acer, DELL or Toshiba Systems