The two are enable and disabled at the same time. It is not possible to have only one enabled at a time. The virtual network feature lets you set up a wireless hotspot from which other computers can connect to your computer and even to the internet through your computer.

So how do you tell if your computer has a hosted wireless network and how do you activate it? This guide will give you a procedure to this and tell you how to fix an inactive virtual network.

How can I tell if my Wi-Fi card support virtual network?

The hosted network is a recent feature in windows. It came into existence with the release of windows 7. It is therefore supported in the following Microsoft operating systems:

Therefore if your computer was built for a Windows 7, 8, 8.1 or 10, then your computer’s Wi-Fi card is capable of a hosted wireless network. Check the back of your computer, or on the side of your laptop for a windows sticker. If it has a sticker of the mentioned operating system then it supports a hosted network.

If your computer was originally running on Windows Vista, Windows XP or any earlier versions, then it is probably not compatible with a virtual wireless network. The Wi-Fi hardware of the previous operating systems might not support a hosted network. If you also built your computer from scratch, there might be a possibility that it is not compatible with the Wi-Fi hotspot feature.

To find out if your computer supports a virtual network, follow these instructions: 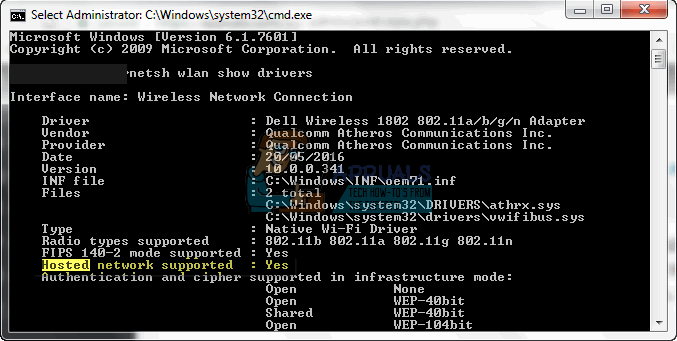 However, if the Hosted Network Support says No it is not always the case that it does not support a wireless hosted network. If your Wi-Fi card device is not working properly, then it won’t be available for analysis therefore the support report will always say No. This could be because of a faulty device or bad drivers. Here is how you can remedy this situation especially if your computer was able to set up a hotspot network previous.

If you upgraded to another OS e.g. from Windows 7 to Windows 10, then the previous drivers might not be compatible with the new OS, rendering your Wi-Fi card inoperable. Here is how to update your drivers and set up a wireless hosted network.

This step will install your Wi-Fi card if it isn’t already installed. Make sure you are connected to the internet via the Ethernet cable.

Step 1 will install your missing driver. If you already had half functional/bad drivers, you will need to update to the latest compatible drivers. You will need to connect to the internet via the Ethernet for this step.

Step 3: Set up a hosted network on your computer via command prompt

You must be an administrator to do this.

This will start a wireless hosted network with your name of choice and password of choice.

If your network does not create in step 3 then probably, your computer does not supported a virtual network, especially if you can connect to other Wi-Fi hotspots from your computer.

Also checkout hosted network couldn’t be started if you get this error when starting up the adapter via command prompt.