World of Warcraft is one of the most successful massively multiplayer online role-playing games to have ever been created. However, just because World of Warcraft (or WoW, as it is laxly referred to) is extremely successful and popular does not mean that the game is perfect. Problems, errors and issues are just as rampant with World of Warcraft as they are with all other massively multiplayer titles, in fact, they’re actually more common than the average person would think they are considering how massive a title WoW is. Error 132 is one of the many generic error codes that WoW players can sometimes run into while playing the game. 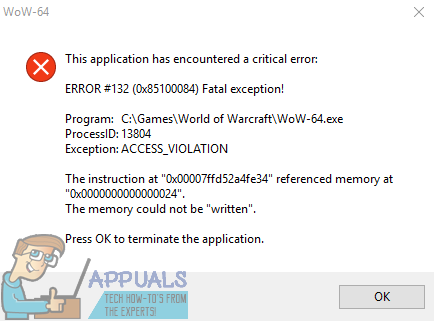 The error message associated with error 132 shows up after World of Warcraft spontaneously crashes and basically states that the game crashed because of a critical error involving a fatal exception. There are over half a dozen possible causes of error 132 – these span from out of date addons and corrupted files to incompatible or outdated drivers and relatively more serious hardware issues. If you have fallen prey to error 132 while playing World of Warcraft, however, the following are some of the most effective solutions that you can use to get rid of error 132 and get back online:

Resetting World of Warcraft’s UI back to its default state is the answer to a boatload of errors and problems that players of the game are prone to contracting, including error 132. To reset WoW’s User Interface, you need to:

A few updates ago, Microsoft set the Xbox applications Game DVR option to enabled by default for all Windows 10 users. While the Xbox Game DVR might be a useful tool to a few Windows 10 users, it is a nuisance or a menace to most since it has the tendency to mess around with some of the most popular video game titles on PC and is especially known to have a negative impact on framerate. Xbox Game DVR is an extremely common cause of WoW’s error 132. Thankfully, though, if you are seeing error 132 because of Game DVR, simply turning the feature off in the Xbox app should fix the problem for you. In order to disable Game DVR, you need to:

Once Game DVR has been disabled, launch WoW and check to see if the issue has been resolved. While it is true that Game DVR‘s Background Recording feature is almost always the true culprit in cases where this issue is caused by Xbox Game DVR, it’s best to turn Game DVR off altogether so as to make sure it doesn’t mess with other games or other aspects of WoW.

Solution 5: Check for Updated driver software for your GPU

Last but certainly not least, another leading cause of World of Warcraft error 132 are outdated graphics card drivers. No matter what game you are playing or whether you’re having any issues, it is always recommended to have your GPU’s driver software up to date and any and all new patches installed as soon as they are released. To make sure that outdated graphics drivers are not what’s causing you all this WoW-related pain, simply check for newer graphics drivers for your GPU and download and install any that are available.

Add-ons are part of the core gaming experience in World of Warcraft. They change the entire gameplay of the game and provide valuable statistics to the player to him raid or do dungeons. Add-ons are developed by third-party developers who release frequent updates.

If there is a case where the add-ons you are using are somehow corrupt or outdated, they might clash with the main game engine when WoW starts and cause the error message. Here, we will be disabling these add-ons by moving them to another location.