Microsoft tried really hard to accommodate the gaming community on Windows 10. In Windows 10, the Xbox app returned bigger and stronger than it was in Windows 8. Part of the attempt to make console gamers feel like home, Microsoft has implemented a feature called Game DVR in Windows 10.

What is Game DVR?

Game DVR allows PC gamers to screenshot their games and quietly record their gameplay in the background. The feature is almost identical to what the Xbox One and  PS4 already have for years. The service runs quietly in the background and starts recording everytime you start playing a game. When you do something legendary in your game, you can automatically fetch the last 15 minutes of your gameplay. You can also use Game DVR to broadcast your gaming online.

I know it sounds awesome, but some users had severe frame-rate issues while using this feature. If you have a low to medium PC, chances are Game DVR will eat enough of your system resources so that you’ll experience framerate drops. Because of this problem, Microsoft has taken steps towards automatically disabling this service for computers that don’t meet the hardware criteria.

With a quiet update, Microsoft has suddenly disabled this feature for a lot of computers that were previously able to use Game DVR. I remember trying out this feature when Windows 10 came out. It worked flawlessly on my Asus i7 laptop (Nvidia 630M GPU) without any noticeable frame-rate drops. But some time after doing the Fall Creator Update, I tried using Game DVR again only to find out that my PC doesn’t meet the minimum requirements anymore. I know for a fact that my laptop can take it since I have used the service before. 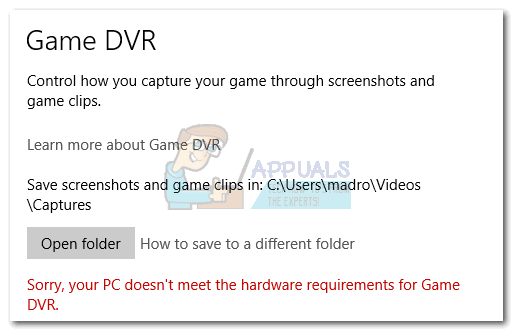 Instead of calculating the graphical processing power of your PC, Windows will cross-check your system configuration against a list of supported hardware. If your graphics card is not officially supported, Windows will automatically prevent you from using Game DVR. Even if you have an SLI or Crossfire setup, you’ll still be this game recording service.

Game DVR is pretty popular, so I believe that a lot of users were affected by Microsoft’s decision. However, there is a way to bypass this limitation and start recording your gameplay like you used to.

If you are unable to use Game DVR anymore, you can do it through a tiny program called GameDVR_Config. It’s essentially a config file with an interface that will allow you to take screenshots and record gameplay on unsupported systems. Even more, you can use it to fool GameDVR into recording your browser and every other program.

The software was initially developed to enable encoding bitrate as high as 30000, but the app has since been updated to include two new options that will enable users to run GameDVR on any unsupported system.

In the steps that follow, we’ll guide you through using GameDVR_Config to re-enable Game DVR on your system. Here’s what you need to do:

Note: If the videos are lagging, try lowering the bitrate somewhere between 2000 and 3000. If that’s not enough, you can also disable audio capture. 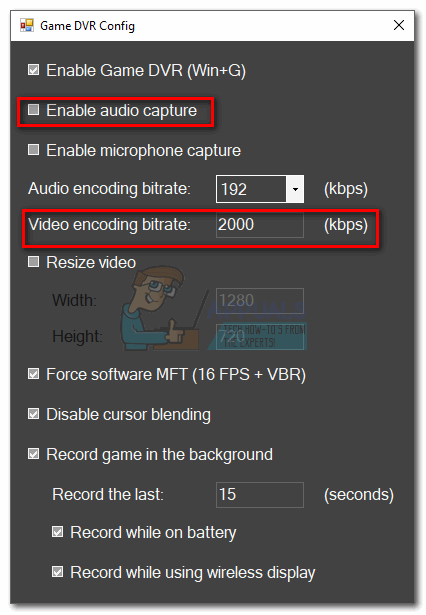 If you’re we’re looking for a way to use Game DVR on an unsupported system, this is pretty much the only way to do it. The beauty is, it works flawlessly with all kinds of programs, not just games. We have successfully recorded Skype, Chrome, Outlook and even File Explorer. The only minor inconvenience is that you’ll need to leave GameDVR_Config open at all times if you want to fetch the last 15 minutes of your gameplay.

Shoutout to FunkyFr3sh for creating this wonderful workaround.