Windows Camera is the stock camera application on all Windows 10 computers, capable of accessing a Windows 10 computer (whether integrated or external) and using it to capture both images and video, and much more. Unfortunately, many Windows 10 users have reported not being able to successfully launch the Camera application and seeing an error message containing error code 0XA00F4244 (0X80070005) stating that their camera either couldn’t be started or couldn’t be found every time they try to do so.

This issue has, in most cases, been reported by Windows 10 users following a Windows update – either a small one (such as a simple security update) or a large one (such as the Anniversary Update or an actual update to Windows 10 from an older version of the Operating System). The most peculiar aspect of this issue is that most users affected by it are able to successfully use their computers’ cameras with third-party applications such as Skype but are unable to use them with stock Windows 10 apps such as Windows Camera. This oddity affirms that this is not a hardware issue with the camera (because if it were, the camera would not work with Skype) but a software issue. 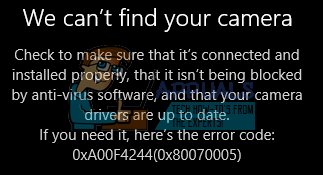 On the software side of things, there are quite a few possible causes of this issue, which is why there are also a good number of possible solutions to it. The following are some of the most effective solutions that you can use to try and get rid of this problem and regain your ability to use your computer’s Camera app:

Third-party antivirus, antimalware and firewall applications can often interfere with a computer’s stock functionality, and that includes its ability to access and use its camera. If a third-party security program is causing you to see error code 0XA00F4244 (0X80070005) every time you try to launch the Camera app, simply disable or better yet, uninstall any and all third-party security programs that you have on your computer. Once that’s done, try launching the Camera app and see whether or not the fix worked.

Solution 2: Make sure that apps are allowed to use your computer’s camera 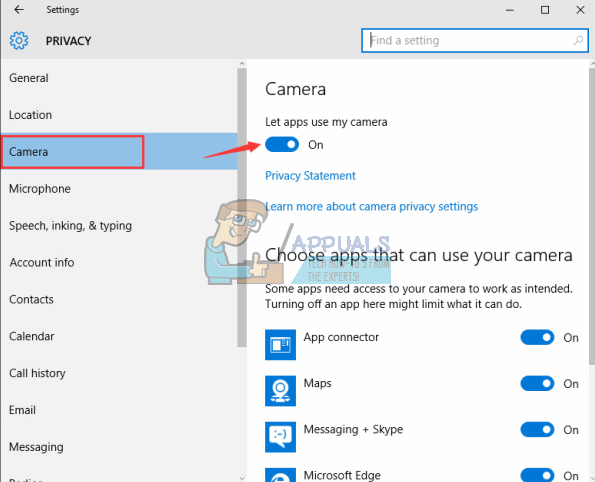 When done, try launching the Camera app and check to see whether or not the problem has been fixed.

If none of the solutions listed and described above worked for you, you may be experiencing this issue because of your computer’s camera, or rather, it is software and drivers, are incompatible with Windows 10 and stock Windows 10 applications. This could especially be the case if you started experiencing this problem after upgrading to Windows 10 from an older version of the Windows Operating System.

You see, quite a few older computer cameras use to stream.sys drivers – this allows them to successfully work with third-party desktop applications such as Skype even on Windows 10, whereas modern and more intricate camera applications such as Windows Camera are unable to detect or access them. If this is the case, the best course of action for you may just be to bite the bullet and spring for a new camera for your computer that is completely compatible with Windows 10. The only alternative would be to downgrade to an older version of Windows – the version that you upgraded to Windows 10 from and the version that you know your computer’s camera works flawlessly on.

Fix: We Can’t Find Your Camera Error on Windows 10