Some users have been reaching us with questions about the RdrCEF.exe process. From what we gathered, the executable is often associated with “stopped working and “application error” pop-ups. Most of the time, errors triggered by the RdrCEF.exe process will surface when the user opens Acrobat Reader.

Other users are reporting abnormal CPU usage by RdrCEF.exe. Altough the RdrCEF.exe process is most likely genuine, it might help to investigate for a malware infection if you see that the process is constantly eating a huge chunk of your system’s resources.

The legitimate RdrCEF.exe is a standard component of Adobe Acrobat Reader. Basically, the RdrCEF.exe process is tasked with handling most of the cloud connectivity features. But for most users, the process is mostly tasked with keeping an open channel with the AWS servers.

Keep in mind that the process is not critical to the well functioning of Windows and its removal will not have any consequences to the operating system of the user.

Some security suites, including Malwarebytes, are known to sometimes quarantine the RdrCEF.exe executable on suspicion of being a trojan agent. Although most of those instances turned out to be false positives, it’s important to make sure that you’re actually dealing with a genuine executable.

The quickest way to make sure of this is to view the location of RdrCEF.exe. To do this, open Task Manager (Ctrl + Shift + Esc) and locate the RdrCEF.exe process.  Once you do, right-click on it and choose Open File Location. If the revealed location is different than C:\Program Files (x86) \ Adobe \ Acrobat Reader DC \ Reader \ AcroCEF \ RdrCEF.exe, there’s a high chance that you’re dealing with a malware infection.

If you’re suspecting a virus infection, we highly recommend that you scan your system with a powerful malware remover. If you don’t have a security scanner already installed, you can follow our in-depth article (here) on using Malwarebytes to remove viruses from your system.

Once you’ve determined that the RdrCEF.exe is genuine, you can safely troubleshoot to eliminate the error caused by Adobe Reader’s executable.

In the event that you’re getting the “RdrCEF.exe has stopped working or “Adobe Reader application error (RdrCEF.exe)” errors, you can troubleshoot with the two methods below. The following fixes might also prove effective if you see abnormal CPU and RAM usage by RdrCEF.exe if the issue originates from a bugged process.

Some users have been able to remove any pop-up/error message associated with RdrCEF.exe by renaming two executable located in the installation location of Acrobat Reader.

As it turns out, renaming RdrCEF.exe and RdlServicesUpdater.exe will force the client to create new and healthy executables that won’t produce the same error. Here’s a quick guide on how to do this:

The issue that caused Acrobat Reader to crash with the “RdrCEF.exe has stopped working error” has been addressed by Adobe in ulterior releases beginning with the update released 12th July 2016.

If you are able to open Acrobat Reader, go to Help and click on Check for Updates to prompt the client to update itself to the latest version. 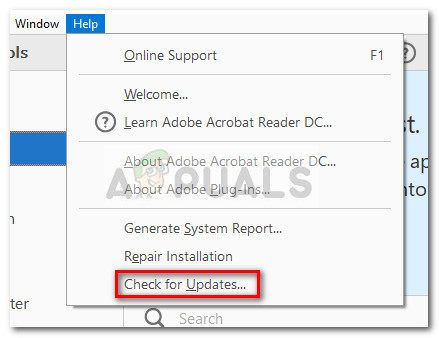 In the event that the error is triggered before the client opens (preventing you from accessing the help menu), you’ll need to take a different route. Start by uninstalling the current version of Adobe Reader from your computer. To do this, open up a Run window (Windows key + R), type “appwiz.cpl” and hit Enter to open Programs and Features.

In Programs and Features, scroll through the application list and uninstall your current version of Adobe Acrobat Reader by right-clicking on it and choosing Uninstall.

Once the suite has been uninstalled, visit the official download center for Acrobat reader (here) and download the latest version. If you want to avoid the security bloatware, make sure you uncheck the two boxes under Optional offers before you hit the Install Now button.

Once the download is complete, open the packaged installer and follow the on-screen prompts to install Adobe Acrobat Reader on your system.