Since the launch of AMD’s Ryzen lineup a few years ago, the whole landscape of PC Gaming has changed dramatically. Not only has AMD launched some pretty stellar CPUs at affordable prices, but they are also solely responsible for increasing the core counts of mainstream CPUs in the desktop market. AMD is progressing so rapidly that it is now Intel who has to play catch-up to the Red Team in order to stay competitive in the CPU space. 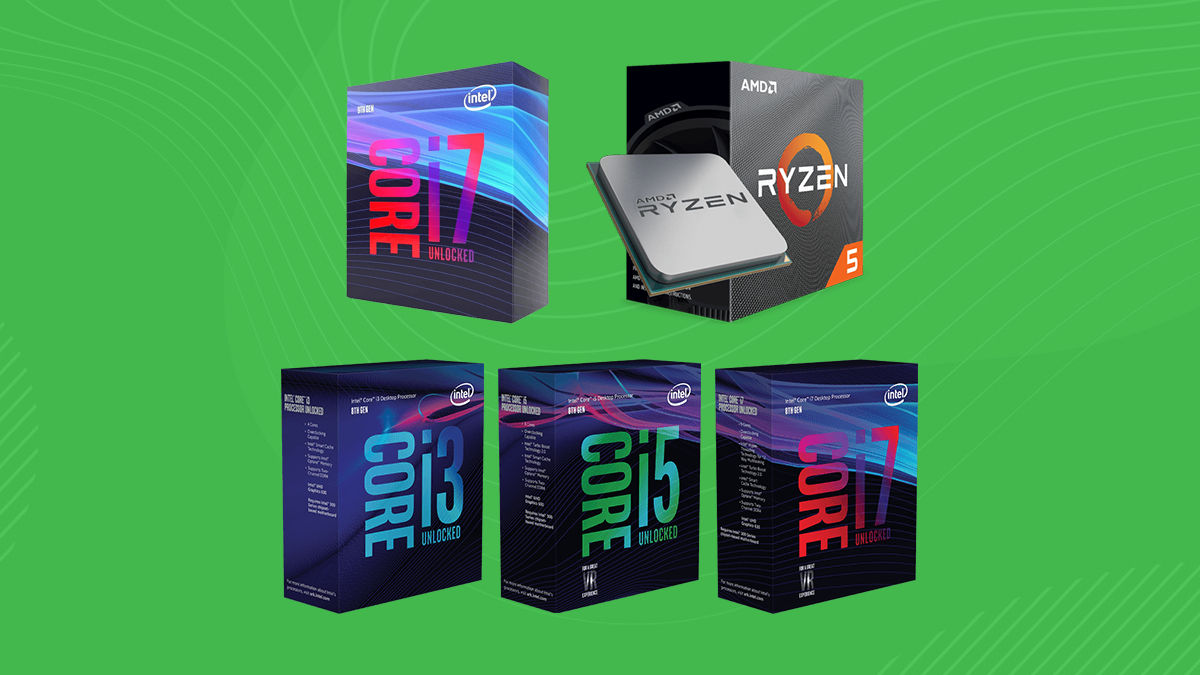 With the launch of the first and second generation of Ryzen CPUs, AMD offered some pretty good bargains for mainstream CPUs while also offering more cores than their competition. This momentum improved with Zen 2 based Ryzen 3000 series CPUs that not only offered powerful CPUs at cheaper prices than Intel but also came pretty close to Intel in the competition for the fastest gaming CPU. Intel’s Core i9 9900K barely held onto the crown of the best gaming CPU while the Ryzen 9 3900X and 3950X came pretty close to the Intel flagship.

With the launch of Zen 3 based Ryzen 5000 series CPUs, AMD has taken the title of the fastest gaming CPU from Intel, as it now has multiple CPUs that are faster than Intel’s offerings in terms of gaming. With that out of the way, here are the 5 best gaming CPUs to buy in 2021.

The Best in the Business

The AMD Ryzen 9 5900X is the fastest gaming CPU on the market as of the time of writing, and that really is no surprise. AMD made a tremendous jump in gaming performance with the release of the Ryzen 5000 series of CPUs based on the new Zen 3 architecture. The new architecture brings about a complete redesign of the core-complex layout in the CPU in order to reduce latency and increase single-core performance.

The Ryzen 9 5900X is packed with 12 Cores and 24 Cores with a base clock of 3.7GHz and a boost clock of 4.8GHz. These are some impressive numbers as the current Intel flagship, the Core i9 10900K, loses out to the 5900X by a difference of 2 Cores and 4 Threads. The Ryzen flagship gaming CPU is a powerful chip that can handle any gaming or productivity task that you can throw at it.

The 5900X regularly tops the benchmark charts when it comes to gaming right now. Even though the AMD Ryzen 9 5950X is a 16 Core 32 Thread behemoth, its gaming performance is not necessarily better than the 5900X in all games. These two CPUs from AMD trade blows depending on the title and the resolution, so it makes sense to declare the 5900X the better gaming CPU due to its lower cost. Not to mention, the 5900X also beats all Intel CPUs currently on the market in terms of raw gaming performance.

The 12 Cores and 24 Threads on the 5900X mean that you will be able to handle most productivity tasks with ease as well. The Ryzen 9 5900X will be great for 3D Rendering, Video Editing, or any other serious tasks that can leverage the high core count of this CPU. The 5900X is also unlocked just like the rest of the Ryzen lineup from AMD, which means that this CPU can be overclocked easily provided that you are installing it into an overclocking-capable motherboard like X570 or B550.

Speaking of the motherboards, the 5900X (like the rest of the Ryzen 5000 series) is supported on current X570 and B550 motherboards, while B450 and X470 support is rumored to come soon as well. Moreover, there is no stock cooler included in the box so you will need a solid aftermarket cooler in order to take full advantage of the 5900X.

Overall, the Ryzen 9 5900X is an extremely powerful CPU with lots of cores and very high raw gaming performance. It is quite simply the best gaming CPU on the market right now.

Best of Both Worlds

AMD’s $800 flagship CPU is also one of the fastest gaming CPUs one can buy right now. The Ryzen 9 5950X is the top-end CPU that has been released in the Ryzen 5000 series. It is also based on the same impressive Zen 3 architecture that minimizes the latency between the different cores of the processor in order to dramatically increase gaming performance. This has been a great breakthrough for AMD’s CPUs since they can now comfortably beat Intel in gaming performance with the new 5000 series CPUs.

Not only is the Ryzen 9 5950X one of the fastest gaming CPUs on the market right now, but it is also a seriously powerful productivity beast thanks to its monstrous core and thread count. With 16 Cores and 32 Threads, the 5950X can handle pretty much any content creation, media production, 3D animation, or general productivity task you can throw at it. This makes it a great choice for those people who use their machines primarily for work but also like to indulge in some serious gaming on the side. For creators by day, gamers by night, this is the perfect CPU.

With that in mind, you also have to look at the price of the 5950X when making a purchase decision. While it does pack in 4 more cores and 8 more threads than the 5900X, their gaming performance is pretty much identical. Therefore you have to be serious about the extra cores and threads in order to spend the extra money on the 5950X over the 5900X. This makes the 5950X a little bit tougher to recommend since its target audience is narrower.

Just like the rest of AMD’s lineup, the 5950X is also unlocked and ready for overclocking. It also does not come with any stock cooler in the box, so a good aftermarket cooling solution is required to reach the full potential of this powerful chip. The 5950X will also be able to work on current X570 and B550 boards with B450 and X470 support rumored to be coming soon.

The Ryzen 9 5950X is one of the fastest gaming CPUs money can buy but due to its higher price tag, not everyone should buy it. The 5950X would be ideal in a multi-purpose machine that can leverage the power of this CPU for both work and gaming.

AMD’s most popular CPUs have always been their 6-core and 8-core models which tend to strike the perfect balance of price to performance for most people. The Ryzen 7 5800X is no different, as it is the newest addition to the Ryzen 7 lineup and delivers exceptional gaming performance with great productivity performance to boot. The Ryzen 7 5800X is the only Ryzen 7 model currently released by AMD at the time of writing but one can expect the Ryzen 7 5700X to make its way into the market eventually as well.

In terms of gaming performance, the Ryzen 7 5800X does not disappoint. It joins its Ryzen 9 brethren at the top of most gaming benchmark charts, and handily beats the Core i7 10700K and even the Core i9 10900K in most games. The Ryzen 7 5800X also delivers a hefty performance improvement over the Ryzen 7 3700X due to the improved Zen 3 architecture.

The 5800X is also packed with 8 Cores and 16 Threads which is the ideal configuration for a high-end gaming CPU in 2021. This core count means that the 5800X can handle most productivity tasks like video editing without breaking a sweat. The 8 Core CPUs like the 5800X will also be the gold-standard of PC gaming for some time to come due to the fact that the PS5 and the Xbox Series X have also received 8-Core CPUs for this generation.

The CPU has a base clock of 3.8GHz and a boost clock of 4.7GHz but it can of course be overclocked as it is unlocked just like the rest of the Ryzen lineup. AMD has also not included any stock cooler with the 5800X so it will require a decent aftermarket cooler as well. Like the other Ryzen 5000 series CPUs, the 5800X will also be supported on current X570 and B550 motherboards. Support on older chipsets like X470 and B450 is also rumored to be coming soon.

The 5800X is a really great 8-core 16-thread CPU and is almost the ideal high-end gaming CPU for most people. This is the chip to buy in 2021 for gaming, however, it is slightly let down by its price. AMD has increased the price of the Ryzen 7 5800X by $50 if we compare it to the last generation Ryzen 7 3800X. This means that the Ryzen 7 5800X is slightly worse value for money, however, it is also a much faster gaming CPU so the decision falls on the buyer.

The Default Choice for Gamers

One of the most beloved gaming processors of the past 2-3 years has been the Ryzen 5 3600. The 6-core Ryzen 5s have always been some of the most popular processors among gamers due to their incredible value and bang-for-the-buck. The 5600X is the spiritual successor to the Ryzen 5 3600X but it does come at a slight price premium of $50 over the older 6-core variant.

For that extra price, you are not getting any extra cores as the 5600X is still a 6-Core 12-Thread part. What you are getting, however, is much better gaming performance. Due to the incredible single-core leap of Zen 3 over Zen 2, the 5600X is a much better gaming CPU than the older Ryzen 5 3600X and 3600. This is all thanks to the architectural improvements that came with Zen 3.

With 6 Cores and 12 Threads, the 5600X is also capable of some decent productivity performance. Casual video editing and less core-heavy tasks will be just fine on this CPU as well. AMD has also gone ahead and included the stock cooler with the Ryzen 5 5600X unlike the Ryzen 7 and Ryzen 9 CPUs. This is what makes the Ryzen 5 5600X such a great value for money.

All in all, the Ryzen 5 5600X is the best affordable gaming CPU right now. It has great gaming performance coupled with decent productivity performance, and it comes at a price point that is accessible to most gamers looking to build a decent high-end gaming machine.

With the dominance of Ryzen CPUs on this list, one might be led to believe that Intel is no longer in the game. However, as incredible as the Zen 3 CPUs are, you can never count out Intel when it comes to gaming. Intel’s Comet Lake flagship CPU, the Core i9 10900K, is still one of the fastest CPUs on the market right now.

The 10900K packs in 10 Cores and 20 Threads and comes in with a base clock of 3.7GHz with a turbo clock of up to a whopping 5.3GHz. These high clocks allow Intel to provide some pretty stellar gaming performance due to the high single-core performance of their CPUs. Not to mention, the 10900K is one of the strongest overclocking CPUs out there and is known to hit all-core frequencies of 5.0 to 5.3GHz if adequate cooling is provided. Even at stock settings, the Core i9 10900K is one of the fastest CPUs on the market, and it readily trades blows with the 5600X and 5800X from AMD.

Intel’s productivity performance is not as strong as AMD’s offerings, but with 10 Cores and 20 Threads, the Core i9 CPU is not a bad performer either. It can handle most productivity tasks pretty well, although AMD’s Ryzen 9 CPUs have the advantage of more cores so they easily take the lead in this department. Intel’s offering is a little cheaper than the current Ryzen 9s though, so that is something that can factor in Intel’s favor when making a purchase decision.