There’s very little doubt about it. Graphic design is one of the fastest-growing industries directly related to digital skills. Whether you want to do freelance work or land a job at a big firm, there’s never been a better time to be a part of this realm. Sadly, it’s not one of the “cheaper” professions to get into. 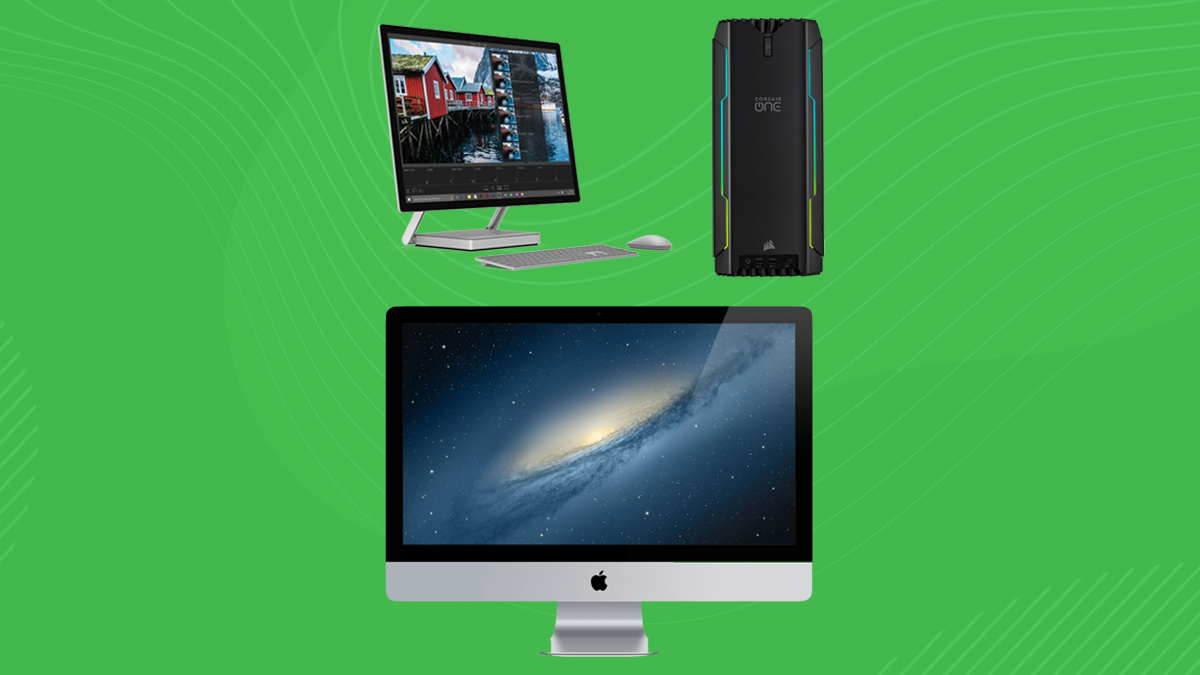 While you don’t need high-end gear when starting out, the need will come up sooner or later. Maybe you’re already a well-established individual and need an upgrade to boost your productivity. A great computer is a graphic designer’s best friend.  Some individuals prefer Macs while others prefer Windows PCs. Gaming computers are a good option as well, as they have high-end specs.

Speaking of specs, they are important if you want future-proofing and want to work without hiccups. A powerful GPU, a processor with higher core count, and a fast SSD can all improve the overall experience.

But whatever your requirement may be, we’ve got you covered. We’ve rounded up some of the best computers for graphic design. Let’s have a look at what made the list.

The inclusion of the much-hyped Apple iMac Pro shouldn’t serve as a surprise to anyone. This is Apple’s return to form, especially in the area of high-end professional workstations. While the cheaper iMac is a good option for most people, and the newly released Mac Pro is a bit overkill for some, this iMac Pro is perhaps the best option when it comes to a high-end workstation.

The design is still mostly the same. The iconic slim design of the iMac is still present, and it looks as good as ever. There’s just something beautiful about cramming all that power in such a thin all-in-one desktop. The ports are still at the back. The screen is astonishingly near perfect. The 5K display paired with Apple’s Retina technology brings it to life. It’s an IPS panels so viewing angles are great too. For color-accurate work, the screen is incredible.

As for connectivity, you get four Thunderbolt 3 USB-C, 4 USB A 3.0, 10Gb Ethernet, a 3.5mm audio jack, and an SD card slot. This time around, they changed the color to Space Grey, and the matching peripherals look great paired with it.

But the iMac Pro excels in the performance department. If you want to go all out, you can get an 18 core Xeon processor, 256GB of DDR4 memory, a 4TB SSD, and a Radeon Pro Vega 64X. Unsurprisingly, it chews through video editing and is a beast at productivity. All that power also makes it incredibly versatile. Photo editing, video editing, audio production, you name it. The iMac Pro can handle most of what you throw at it.

Of course, there’s the heavy Apple price tag. I’d say the best value is with the 10 core processor, paired with Vega 64 and 64GB of memory. That configuration should last you a long while. Sure, it’s expensive but if you’ll use it for 5+ years (potentially), it’s worth it.

When the Surface Studio launched, I was immediately on board with it. A large desktop screen with a hinge that you can angle to your desire? And you can draw on top of it? Sign me up. Sadly, the first iteration of the Surface Studio was too expensive and lacked powerful hardware. The Lenovo Yoga A940 is a fearsome competitor and does a lot of things better too.

The best thing about the Yoga A940 is its ingenious design. Some might argue that it looks a bit bland at first, but once you start noticing the little details, it’s quite impressive. It comes with a content creation dial, which you can use in Photoshop to change colors, the stroke of your brush, and much more. It works with a lot of apps, and you can use it to change the volume in Spotify.

At the bottom, we have a 3D soundbar with Dolby Atmos Audio. As expected, it sounds exceptionally good and is very accurate. It even has a wireless charger for your phone on the right side, which is a quick charger in fact. The content creation dial I mentioned previously can be plugged either into the left or right side depending on your preference. This is immaculate attention to detail.

The processor is a Core i7 9700, paired with 32GB of DDR4 memory, a fast 256GB SSD, and a Radeon RX 560. So, it might not be the most powerful machine out there, but it does cut the competition price-wise. The RX 560 lets you get some light gaming done as well. The major downside is the painfully slow 5400RPM hard drive. This is a disappointment as it does slow down the system at times.

The screen is also superb, covering 100% Adobe RGB coverage and 100% sRGB coverage. Digital artists will fall in love with this display. The included pen works well and is of great quality for drawing and retouching in Photoshop. You can even use this just as a monitor (albeit an expensive one), as it does have HDMI in and out. Truly, this is an extremely versatile workhorse machine and offers a lot for the price.

When the Microsoft Surface Studio was first unveiled, digital artists and pen screen display enthusiasts were the first who noticed. It’s been a long time dream for many people to draw on a large display, and use it as a regular monitor when needed. The Surface Studio 2 makes some incremental improvements to the first one, but does it live up to the hype?

You can’t talk about the Surface Studio 2 without talking about its aesthetically pleasing design. It is pure eye-candy and is an absolute pleasure to gawk at. The slim bezels, the robust hinge, and the clever base all combine to give it a sleek yet elegant look. All of the internals are housed in the base, and that’s genuinely clever engineering.

The display is great for drawing, as you’d expect. It has a 3:2 aspect ratio, which is great for photo editors and people who prefer drawing on screens. The display is vibrant, color-accurate, and just an overall joy to use. The Surface dial is extremely versatile and can be used in Photoshop to change colors, the size of brushes, go through layers, etc.

The included keyboard is also good enough for even professional writers. Although the mouse isn’t exactly as comfortable as I had hoped. The pen is a joy to use, however. It’s accurate, reliable, and has 4096 levels of pressure sensitivity. Long story short, it’s one of the best pens out there for drawing, only rivaled by Wacom.

Despite all that, the Surface Studio 2 is extremely expensive. You know you’re in trouble when Apple’s iMac Pro looks like a better value. I say this because of the mobile processor, which will show it’s age rather quickly. Of course, the Studio 2 has that incredible pen display, which might be a major selling point for some.

I’ve heard the same argument over and over again. People always say Pre-built PCs aren’t the greatest value, and I tend to agree. You can build a PC for yourself for much better value, and it will get the job done. But I’d be hard-pressed to build a compact, silent, and good looking PC like the Corsair One Pro. That’s where it’s hefty price tag starts to make sense.

The Corsair One Pro i80 is nothing short of a technical marvel. It looks absolutely incredible, for starters. Its compact frame means you can put it on a small desk, yet it makes its presence known with great tasteful RGB lighting. From any angle, this is a total knockout in terms of aesthetics. The insides are also completely liquid-cooled. Both the GPU and CPU, which is impressive on its own.

The processor here is the Core i9 9920X and the GPU is the GeForce RTX 2080Ti. These are power-hungry components, yet with the great liquid cooling I mentioned, this PC performs silently. It doesn’t get annoyingly loud at full load either. 16GB of DDR4 memory is included, though you can upgrade that to 32 or more. The 960GB NVMe SSD is blazing fast and helps a lot in video editing.

With those specs, you’d want to play some games as well. The One Pro i80 is an FPS crushing machine and can handle any game you throw at it. It’s just as good a gaming PC as it is a workstation. Yet, the slow 5400RPM hard drive, the limited upgrade potential, and the price tag are all valid things to consider before buying. Still, this is the best compact workstation on the market.

Let’s say you absolutely adore all-in-one PCs. You also happen to be a graphic designer who needs an accurate, vibrant, and sharp display for your work. Well, if you don’t have a lot of money to spend, the Acer Aspire S 24 might be a good option. I realize it’s for a very niche audience, but it’s worth considering.

The Aspire S 24 does look quite premium despite the low price. The display has thin bezels, and the golden chin at the bottom does make it stand out. All the internals are housed inside the base of the display, which makes things quiet and clean. It works quite silently, which is a bonus attribute. It even has a wireless charging pad, which is a neat thing to have.

Photo editors and graphic designers will appreciate the color accurate and vibrant display. It might be only 1080p, but for the price, it’s an understandable trade-off. Keep in mind, the Core i5 8250U isn’t the most powerful chip in the world. The lack of dedicated graphics is also disappointing. However, if you are just photo editing, you should get by fine.

The peripherals are substandard but that was to be expected. There is no touch screen option either, which could be a dealbreaker for some people. Overall, the Aspire S 24 might not be powerful, but it’s a decent entry-level AIO system that can handle photo editing and lightweight graphic design. However, it can be a tough sell for some unless you absolutely need an all-in-one PC.