The 0x000000EA Blue Screen Error means that a program tried to use the Graphics rendering capabilities of the system and failed and because of this, Windows threw a blue screen of death. 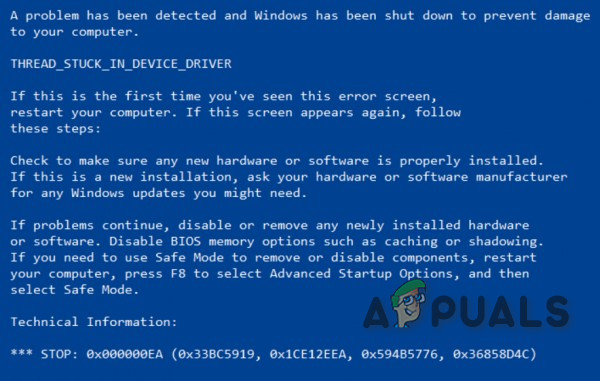 The “Hardware Acceleration” of your graphics card is how much Windows relies on it to power the graphics of your PC. If you accelerate the hardware, your computer will use it to the highest settings and options on all your games and graphics-intensive applications. And if it is not accelerated, the PC will run the graphics within the Windows system. Disabling the Hardware Acceleration may solve the 0x000000EA error, you should disable the hardware acceleration.

A missing/outdated/corrupted device driver is usually the most suspected culprit to create a BSOD error and the 0x000000EA error can occur because of Graphics Drivers. Replacing it with the default driver may solve the problem.  But before replacing, you must uninstall the current Graphics Card Driver first. To uninstall use the utility Display Driver Uninstaller. You can uninstall without this utility but this utility ensures that there are no remnants of the drivers.

You should update all the drivers that require updates. For this, you can refer to the section of Update Device Drivers

After updating the Graphics drivers, check if the problem is solved.

Driver errors are often related to hardware errors which can result in BSOD errors, and the system’s graphics card can have a hardware issue, such as overheating.

To know if the problem is in graphic/video card, try the same PC graphic card in another Windows laptop/computer to see whether the card is corrupted/failed physically somehow. If it is damaged, replace it with a new one. Moreover, if the card has the blower fan type, there’s a good chance it’s clogged. So, it is always a good idea to clean the computer and especially the Graphics Card of any dust, etc.

After cleaning the system check if the system if cleared of 0x000000EA Blue Screen Error.

Overclocking CPUs and GPUs is a common practice in the computing world, and if you are using an overclocked CPU/GPU and facing the 0x000000EA Blue Screen Error then your system cannot handle that overclocking. In that case, reverting overclock to its base clock speed may solve the problem.

Warning: Enabling or disabling Overclocking uses the same technology and if not done properly, you may brick your system and it can cause non-recoverable damage to the whole system. So, proceed at your own risk.

After disabling overclocking, check if the problem is solved, if not, then proceed to the next solution.

Solution 5: Update BIOS of the System

BIOS loads firstly when the computer is powered on along with all the attached input-output devices and then OS is loaded. If BIOS cannot connect and load any of the devices then it may result in the 0x000000EA Blue Screen Error. So, updating the BIOS may solve the problem.

Warning: Proceed at your own risk as interrupting or failing to update the BIOS at any point might brick your computer and non-recoverable damage to the whole system.

To update BIOS of your system, follow our undermentioned articles.

Hopefully, your 0x000000EA Blue Screen Error is solved and you are using the system without any problem.