Error Code 0X87E5002B occurs when Xbox users attempt to launch a digital game on their Xbox One or Xbox Series X / S. This error code indicates that your console needs a system refresh to update the console. 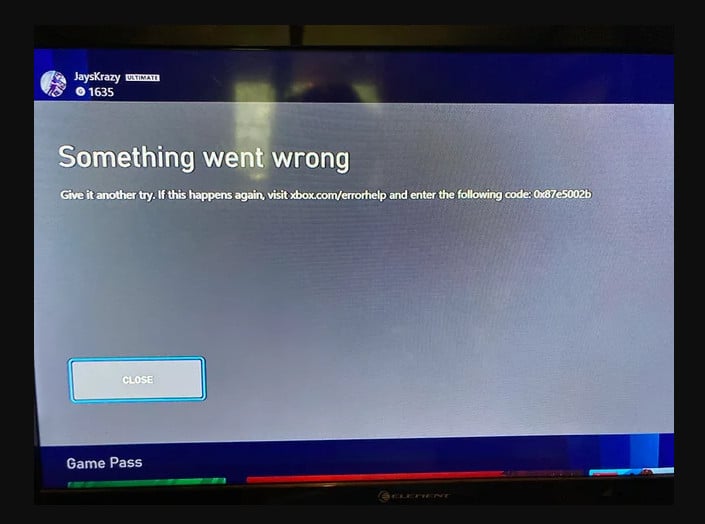 The following problem commonly occurs when there’s a firmware update that’s not yet installed or when you’re dealing with corrupted temporary files.

Start troubleshooting this issue by installing every pending update and performing a power cycle procedure if the issue persists before deploying a series of network & system-related fixes.

If you’re starting to troubleshoot the issue, you’ll have to ensure that your console firmware and the game installation are running on the latest available updates.

In the past, this issue has been associated with a licensing issue brought about by a firmware glitch. In most cases, you should be able to fix it by forcing your console to update to the latest firmware version. As a safe measure, you should also take the time to ensure that the game is also updated to the latest version.

If you aren’t sure if your console is updated, follow the instructions below:

Note: The instructions below will work on both Xbox Series S and X.

If the problem is still not fixed, move to the following method below.

If you’re having this problem when you try to launch every game in your digital game library, it’s likely because of a bug caused by temporary data. This problem is known to happen on the Xbox One and the Xbox Series X.

Note: Microsoft has partially patched this issue on both the current-gen and the last-gen console, but the issue seems to persist with certain library items.

To fix this, you’ll need to start a power-cycling process to force the power capacitors to drain themselves.

The instructions on doing this will work on both Xbox One and Xbox Series S/X consoles. Here’s what you need to do:

If the problem hasn’t been fixed, move on to the following method.

If you are getting this error with every digital game you attempt to launch from your library, you should also suspect a potential issue caused by the currently saved MAC address.

To address this issue and fix the 0X87E5002B error (if this scenario is applicable), you must clear your console’s current MAC address. You can do this in your Xbox console’s Network settings. The steps of doing this are almost identical on both Xbox One & Xbox Series X/S.

Note: Once you’ve done that and restarted your console, it should use the default MAC address the next time it starts up. This could get rid of the sign-in error.

Follow the instructions below to clear the MAC address of your Xbox One or Xbox Series X/S console:

If you’re still experiencing the same issue, move to the next method below.

If you are only experiencing this issue with a particular game, you should try reinstalling it if you haven’t tried this procedure.

This quick fix is usually effective when multiple users share an Xbox account where the game library is shared.

Note: The steps of reinstalling a game on Xbox One and Xbox Series X/S  are virtually identical since the two consoles have a very similar operating systems. All you have to do is remove the game from the library of games and install it again.

Here’s how to do this:

If the problem is still not fixed, move to the final fix below.

If you’ve come this far without a viable fix, one last thing you can do is effectively reset your console back to its initial state. This procedure is also known as a hard reset.

Important: Because you might lose all the information you’ve saved on your Xbox if you do this, you should try all your other potential fixes above before following this method. After completing this procedure, you must re-download every game currently stored on your console. Save game files will also be cleared with this procedure, so make sure you upload them on the cloud (or store them on an external USB stick) before following the instructions below.

If you want to go through with this procedure and you understand the consequences, follow the steps below: