Samsung debuted the S95B, its first OLED TV in more than ten years, last year. Even though it wasn’t the South Korean company’s flagship 4K TV, the QN95B managed to garner more attention and accolades. This is because the QD-OLED TV has excellent colours, viewing angles, contrast ratio, deep blacks, and reaction speed. The QD-OLED TV’s sales, however, were still below what the business had anticipated.

In early 2022, Samsung Display experienced yield challenges with its QD-OLED panels, and it was unable to supply Samsung DX (the division that sells TVs) with enough panels, according to a study from market research company Omdia. As a result, Samsung DX was unable to introduce the TV globally, which reduced S95B sales overall. But since July 2022, QD-OLED panel yields have increased by greater than 80%. 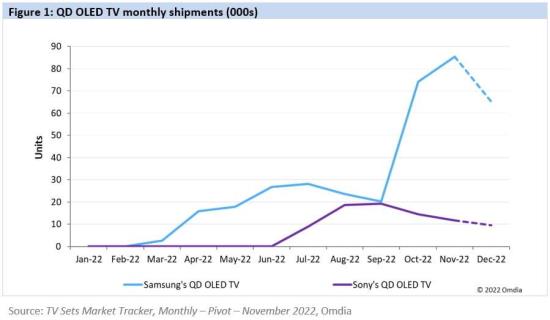 Internally, Samsung DX was given the go-ahead to increase TV sales, and as a result, the business began providing large discounts on the S95B. Starting in October, the QD-OLED TV’s sales rocketed to over 70,000 units each month as a consequence.

The OLED TV market was shaken by the price cut, but the S95B’s sales still fell short of Samsung’s projections. The South Korean company just just exceeded the 350,000 unit threshold in 2022 despite having aimed to sell over 600,000 QD-OLED TVs. 440,000 units are anticipated to be sold between Samsung S95B and Sony A95K (both employing the same QD-OLED display). The price reduction had an adverse impact on sales of Samsung’s Neo QLED TVs, which use Mini-LED technology.

However, Samsung DX is intending to switch up its approach in 2023 and use all available resources to advertise its new S90C and S95C QD-OLED TVs. Both of these brand-new TVs were introduced earlier this month at CES 2023 in Las Vegas, USA. They have greater colour luminance, more power efficiency, longer durability, and reduced ambient light reflection. Their peak brightness may reach up to 2,000 nits. Additionally, Samsung has released a 77-inch model of the TV, which is sure to boost sales even more.

The arrival of QD-OLED TVs by Philips, Sharp, and TCL will increase competition for the South Korean company. Therefore, Samsung has to be cautious with how it sets the pricing for its most recent QD-OLED TVs and how effectively it can set its TVs apart from those of competitors by including more software features. Omdia anticipates that the market for QD-OLED TVs would expand by 141% annually in 2023 and reach 2 million units by 2026.