The Snapdragon 8 Gen 2 chipset, the latest flagship from Qualcomm, was announced today. Compared to the Gen 1 model, performance has increased on all fronts. The SM8550-AB, the official name of this chip, was manufactured on a 4nm node. Here are some specifics regarding its components.

Although Qualcomm has concentrated on increasing power economy, the new processor nevertheless offers noticeable speed increases. The new Kryo CPU triple offers up to 40% more efficiency and up to 35% more performance.

The core makeup is different from the 8+ Gen 1, but the clock rates are the same. High single-threaded performance is provided by the single Kryo Prime core (based on Cortex-X3), which operates at 3.2GHz. This time, though, it is supported by four Performance cores that operate at 2.8GHz to better handle multi-threaded applications. Finally, there are three Efficiency cores.

Up to 25% more performance and up to 45% more power efficiency are offered by the most recent Adreno GPU. The Snapdragon platform now has support for hardware-accelerated ray tracing. The major Android chipset suppliers already offer ray tracing hardware, so it’s possible that mobile game creators will adopt the new technology like they did for PC and console games. On-device displays with QHD+ resolution can run at up to 144Hz on the Snapdragon 8 Gen 2 and those with 4K resolution can run at up to 60Hz. Additionally, it supports external monitors up to 4K at 60Hz (as well as HDR10+, Dolby Vision, and the 10-bit Rec. 2020 colour gamut). Finally, Qualcomm made AV1 video decoding available; it now supports streams up to 8K at 60 frames per second (with HDR).

According to Qualcomm, Samsung’s 200MP HP3 and Sony’s Digital Overlap HDR sensors have been tuned to function with the Snapdragon ISP. The Gen 2’s triple 18-bit ISP, like its predecessor’s, can support up to three 36MP cameras operating at 30 frames per second or up to 200PM for a single camera. Zero shutter lag is supported for 108MP sensors.

The chipset supports 8K HDR video at 30 frames per second, as well as 4K at 120 frames per second and slow-motion videos (720p at 960fps). Several HDR formats are supported, including HDR10+, HLG, and Dolby Vision. It can record up to four exposures for every video frame using DOL sensors.

The new Snapdragon X70 modem is added to the Snapdragon 8 Gen 2 processor. Naturally, it supports both sub-6GHz and mmWave 5G. Max downlink and peak uplink speeds are both 10Gbps.Two 5G SIMs (or 5G+4G) can be active simultaneously with this modem’s Dual-SIM, Dual-Active capability.

Local connectivity is made possible by the new FastConnect 78000 system, which supports the forthcoming Wi-Fi 7 standard. It can go up to 5.8Gbps (up from 3.6Gbps on the previous chip).

The FastConnect system continues to support Bluetooth 5.3. It can support 48kHz lossless audio streaming and the lowest-ever 48ms latency for gaming with the most recent Snapdragon Sound system.

According to Qualcomm’s press announcement, prominent Android manufacturers like Asus ROG, Honor, iQOO, Motorola, nubia, OnePlus, Oppo, Red Magic, Sharp, Sony, vivo, Xiaomi, Meizu, and ZTE will use the Snapdragon 8 Gen 2 chip. For some reason, Samsung is not mentioned, despite the fact that Qualcomm declared in an earlier financials call that the Korean firm will only employ its processor for the Galaxy S23, the following high-end Galaxy smartphone range. 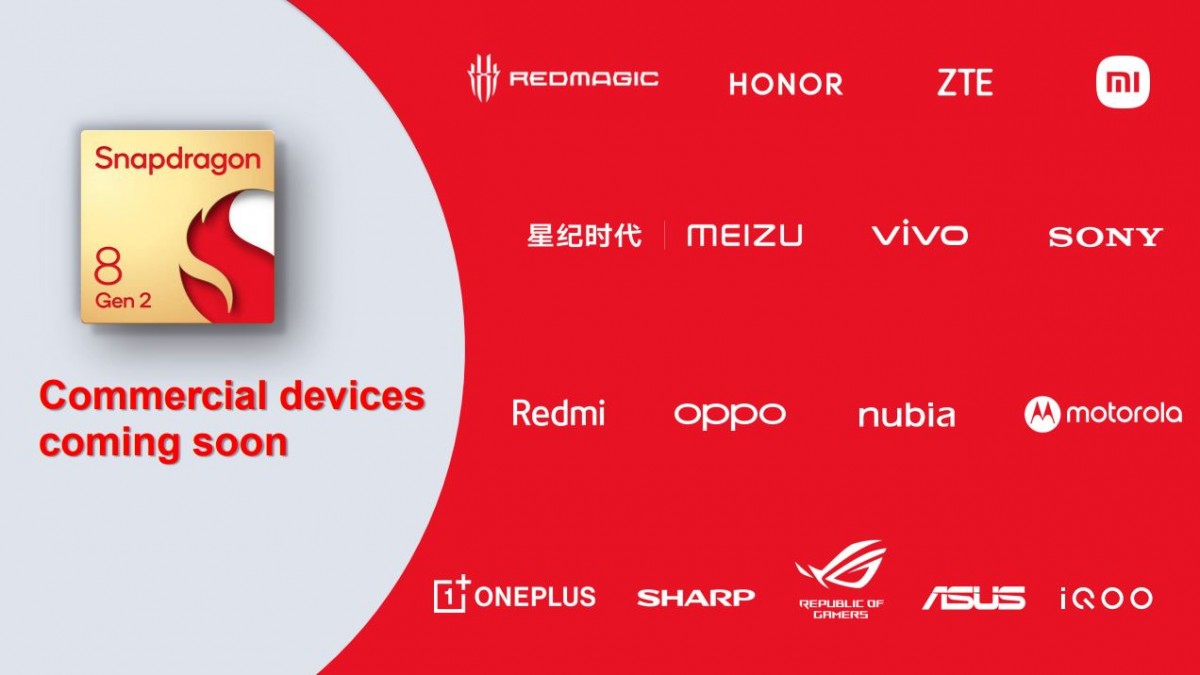 We’re interested in seeing how the Snapdragon Gen 2 compares to rivals like the A16 Bionic and the Dimensity 9200. We’ll let you know as soon as we have the official benchmarks.