AMD’s HD7000 series of GPUs were a huge success not only because of their sheer performance but because of their huge overclocking potential at the time. Truth be told, this is especially true for the HD 7870 and HD 7970, both of which had amazing OC gaps and could be considered as overclocking paradise for enthusiasts. This is exactly why a huge number of these graphic cards underwent extreme overclocking in order to reach their peak performance. The cards in this series are quite durable, powerful but tend to overheat if you push them too much.

With this being said, this tutorial will enable you to get the most out of your HD 7000 series graphic card without doing any significant damage to it. You do not have to worry about this tutorial being too difficult to understand or just for “tweak geeks”; overclocking is not as dangerous as lots of people claim it to be, especially if you know what you are doing and / or you have professional guide by your side (like this tutorial). With this in mind, we will jump straight to business!

In order to get the most of your HD 7000 GPU via overclocking, first you will have to make sure you have all the required software to work with. Don’t worry, you do not have to spend a single penny on software in order to overclock it, all of the programs below are freeware:

You need to update the drivers to the newest version in order for the entire process to go as smooth as possible.


In order to successfully overclock your GPU you will need an overclocking software, one of which comes along with the AMD’s drivers. It is called AMD Overdrive and possesses basic overclocking capabilities. What it lacks is settings for voltage control which are important if you wish to extremely overclock your GPU. In that case, you will want to download MSI AfterBurner which is a top quality OC software that has everything you need for overclocking (including voltage control). We will be using this program for this tutorial.

Benchmarking software is a must when performing any type of overclocking as it puts your OCed components under great load which checks the stability of your entire system. In other words, you should test your system with benchmarking software after each increase in your GPU’s core clock or memory clocks … but more on that later on in this tutorial. For now, you should go ahead and download PassMark or 3DMark both of which are excellent benchmarking programs that will squeeze the last drops of juice from your GPU.

Another great thing to have while overclocking your GPU is a system utility tool called GPU Z. It lists out important information about your graphic card such as its bandwidth, pixel fill rate, texture fill rate, clocks and so on. We will use it to check how much performance did we gain after overclocking.

Another very important thing with overclocking is to make sure your PSU has a bit of headroom for the overclock as there is a slight chance it can bottleneck your entire system if your PSU can’t produce enough power for your OCed GPU.

Finally, we have come to the actual overclocking of your HD 7000 GPU. The overclocking process itself is the same for all mid to high end HD 7000 GPUs as their core clocks and memory clocks are very much similar, ranging from 800 to 1000MHz for the core clocks and 800 to 1500MHz for the memory clocks (including all rebranded and factory OCed versions of the HD 7000 series GPUs). With this being said, let us jump straight to work!

First of all, close all irrelevant programs and apps and make sure you have installed and updated all of the software mentioned above. After that, open MSI AfterBurner and click on the settings button in the lower right corner of the window. 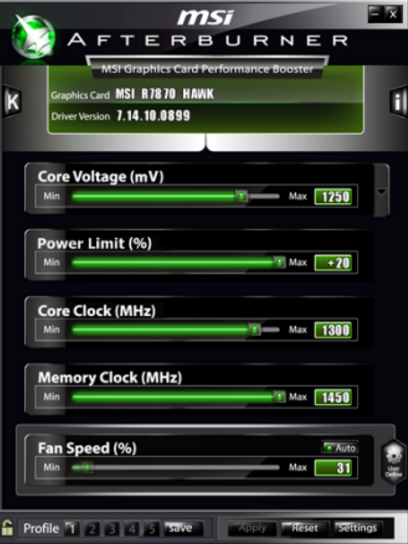 After opening the settings window make sure the following settings are checked: 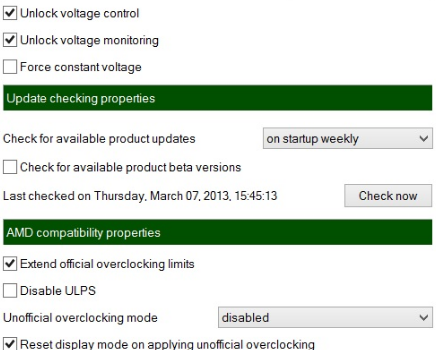 After doing this, simply click apply then OK and you will be ready to start overclocking!

Before you start overclocking you must make sure that all other components in your system are stable. You can do this by running a test benchmark with PassMark or 3DMark. Make sure you write down your results so you can compare them to the results you get after overclocking. Now we finally get to the actual overclocking which is done on the main window.

First things first – increase the GPU fan speed to cca 40% which will enable to you get better OC results and lower temperatures while benchmarking. Now, the actual overclocking – The safest way of overclocking your HD 7000 series GPU is to increase both its core and memory clocks by 25Mhz. After each increase you will want to save your changes and run a benchmark, but more on that in the next step.

Now that you have raised the core and memory clocks of your GPU, it is time to benchmark it to see can it withstand the overclock. This step is rather simple – simply open up PassMark or 3DMark, choose your desired settings (don’t drop the settings too low! If they are too low your GPU won’t get properly tested under full load) and let the benchmark do its job. If it is successful, you can go ahead and repeat the second step (raise the clocks by 25MHz again). Keep doing this until you get a black / blue screen or your benchmarking software crashes. This indicates that you’ve reached the peak of your GPU (keep in mind that this “peak” differs from GPU to GPU) and that you will have to lower the clocks by 25 (or, in some cases, even 50MHz) in order to reach stable grounds … or, if you really want to get the last bits of power out of your GPU, you can slightly increase its voltage which will give you a bit of extra headroom for clock increases.

Keep in mind that tempering with voltages can be pretty dangerous and you should only increase it slightly if you don’t have a proper cooling system for your GPU, and by “proper cooling system” we mean liquid cooling systems, dry ice (also known as DICE) and similar components. With this being said, if you really want to play with the voltage settings (and by play we mean significantly increase them) in order to extremely overclock your HD 7000 series GPU, you should invest in some sort of an extreme cooling for your setup.

Still, even with the stock fan and without increasing the cards voltage, you can still increase the core clock by at least 10%. If you want to play it safe and / or you are afraid of tampering with voltage settings, leave it at that. 10% performance increase is still good and will give you a slight FPS boost in GPU bound applications and games… But…

If, on the other hand, you like living on the edge and you’re prepared to take some risk, it is still relatively safe to increase the card’s voltage to 1.25V with the stock fan (make sure you increase the fan speed though). At this voltage you will be getting around 15% to 20% performance increase.

Now that we have pushed our GPU to the max, let’s see what kind of performance increases did we get!

Below you can see the idle temperatures of our HD 7870 (stock and overclocked) and how they compare to other GPUs:

As you can see, the OCed HD 7870 has lower idle temperature than the stock one. Let’s check out how it ranks on the next chart which shows the temperatures under full load:

The fan speed control is a vital part of overclocking and as such it should never be taken for granted. If you don’t mind the noise you can further increase the fan speed to 50% or even 60% if your readings are higher than the ones on the charts (this also varies from GPU to GPU) and if you are afraid of your GPU overheating. Truth be told, the difference in noise level between stock and OCed (40% RPM increase) is barely noticeable, but some people just hate the sound of the fans in their rig…

Here comes the part all of you were waiting for – let’s see what kind of performance increase did we actually get from the overclock.

First things first, let’s check out the before and after screenshots of GPU Z:

On paper, HD 7870 now has better bandwidth, pixel fill rate and texture fill rate., almost reaching the specs of HD 79xx cards. But video games aren’t run on paper, are they? That’s exactly why we are going to show you the average FPS across a couple of popular games:

As we said in the very beginning of this guide, the entire lineup of HD 7000 GPUs has great overclocking potential. Even though it varies from card to card, you can expect at least a 10% increase in your GPUs base clocks with stock fans and without any tampering with its voltage. But, as you can see above, it is relatively easy to achieve 20+% performance increase. All it takes is a lot of patience, time and trial-error troubleshooting. If you can spare a couple of hours to fine tune your GPUs core and memory clocks as well as its fan speed and voltage, you will get yourself a noticeable performance increase in GPU demanding applications and games.