An SFC (System File Checker) scan is a pretty useful utility built into every version of the Windows Operating System. An SFC scan analyzes all system files for corruption and damage and fixes any issues with system files found by replacing the damaged or corrupted system files with completely fresh, cached versions. A successful SFC scan can fix a multitude of different issues with a Windows computer, but an SFC scan can also fail entirely. When an SFC scan fails, it displays an error message explaining what went wrong and why the scan failed. Many Windows users see the following error message when they run an SFC scan and it fails:

This error message can show up at the end of an SFC scan or when an SFC scan gets stuck in the same stage for a while and then fails. In addition, this problem is also known to affect all of the versions of the Windows OS that are currently supported by Microsoft – from Windows 7 to Windows 10. While the exact cause of this issue has not been confirmed and can vary from one case to the other, this issue is often associated with the SFC utility, for one reason or the other, not being able to access files that it either needs to operate or needs to scan for damage and corruption. When an SFC scan fails and displays this error message, you can be certain that any damaged or corrupted system files that it may have found were not fixed, and that makes the problem pretty significant.

Thankfully, though, most of the Windows users who have been affected by this problem in the past have been able to resolve it – using one solution or another. The following are the most effective solutions that you can use to try and fix this issue:

CHKDSK is a built-in Windows utility capable of scanning hard drive partitions, testing their file system integrity and fixing logical file system errors. In some cases, running the CHKDSK utility fixes whatever issue was causing the SFC scan to fail, effectively getting rid of this issue. In order to apply this solution, you need to:

Note: You may be asked to provide confirmation or an administrator password. If so, provide whatever is required.

Once CHKDSK is done, the computer will boot up normally, and you can run an SFC scan to determine whether or not the problem has been fixed.

Solution 2: Modify the security descriptors on the winsxs folder

One possible reason for SFC scans failing on an affected computer is because the SFC utility cannot access the winsxs folder (C:\Windows\winsxs) because of some issues with the folder’s security descriptors. If so, all you need to do in order to get rid of the problem is:

Note: You may be asked to provide confirmation or an administrator password. If so, provide whatever is required. 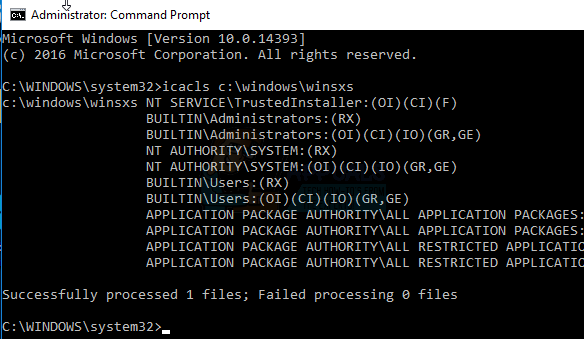 A repair install is an option that all Windows users have – this option allows users to repair all critical system files and fix almost any issue that is plaguing their computers. Even though it is referred to as a “repair install”, it does not reinstall Windows. Instead, a repair installation simple fixes as many problems with the affected computer as possible, and since that is the case, a repair install can be performed without losing any data stored on the computer in question.

If even a repair install of Windows is unable to fix this problem in your case and SFC scans still fail on your computer following the repair install, your best bet would certainly be to clean install Windows from scratch. Clean installing Windows means wiping your current installation of Windows clean – along with all installed applications and any stored data and then installing a completely fresh, new Windows Operating System which, in almost all cases, is the exact same version of Windows that was previously installed on the computer in question.

On the off-chance that your computer remains affected by this problem even after you clean install Windows, the only remaining plausible explanation for the issue is that your computer’s HDD/SSD has failed or is beginning to fail. The SFC utility may not be able to access the files it needs to operate or the files it needs to scan because they are located on sectors of your computer’s HDD/SSD that have already gone bad, and if that’s the case, your best course of action is to find out if your HDD/SSD really has failed or is failing, and then replace it before something disastrous happens.

If you want to determine whether or not your computer’s HDD/SSD is failing by yourself, You should check for Hard Drive failures. However, you can also choose to have a professional take a look at the HDD/SSD, just in case. In addition, if the HDD/SSD is still under warranty, it is highly recommended that you send it off to the manufacturer to have it checked out and if it really has failed or is failing, fixed or replaced.

In some cases, the Windows Modules Installer service might be disabled due to which this error is being triggered. Therefore, in this step, we will open up the service management window and then enable it. For that:

In certain cases, the currently booted version of Windows might be glitching due to which this error is being caused. Therefore, in this step, we will first be booting into recovery options and then open up the command prompt there. In there, we will execute some commands to scan the Windows installation for errors. For that:

Note: You should also try to run the SFC scan in the safe mode to rule out the interference of a third-party app or service.