A Hard Disk Drive (HDD) is one of the most essential parts of a computer. If a computer’s motherboard is the part of its brain that assesses situations and handles operations, its Hard Disk Drive is the part that remembers everything – from the computer’s Operating System(s) to the user data stored on it. Even though HDDs have a long life span, there comes a time when they finally come close to their expiration date and either fail or start to fail. In most cases, this is identified by the fact that the computer a faulty HDD is connected to is unsuccessful at booting into its OS regardless of how many times it has restarted.

However, a failed or failing Hard Disk Drive is not the only thing that can keep a computer from booting into its Operating System as it should. Also, getting a replacement for a failed or failing HDD can cost a substantially large amount of money. This is why you need to be sure that your HDD has failed or is failing before you attempt to repair the problem or replace the HDD. The following are the two most effective methods that you can use to check if your HDD has failed or is failing:

Method 1: Check to see if the drive is visible in BIOS settings

The simplest method that you can use to determine whether or not your Hard Disk Drive has failed or is failing is to see whether or not the drive shows up in your computer’s BIOs settings. However, while this test may be simple and straightforward, be warned as it is not entirely conclusive and that you will most likely also have to use Method 2 to be sure of your HDD’s status.

Enter your computer’s BIOS (or UEFI) settings as soon as it starts up. The key that you need to press to enter these settings depends on the manufacturer of your computer’s motherboard and can be anything from Esc, Delete or F2 to F8, F10 or F12. The key is almost always displayed on the first screen you see when you boot your computer up and is also listed in the manual that was supplied with your system. In addition, a quick Google search asking “how to enter bios on” followed by the model number or manufacturer of your computer’s motherboard will also tell you what key you need to press.

Find an option named Boot order or something similar. This option is mostly located under the Boot tab but you may have to peruse through the different tabs in your BIOS settings to locate it.

Check if your Hard Disk Drive is listed in your computer’s boot order. 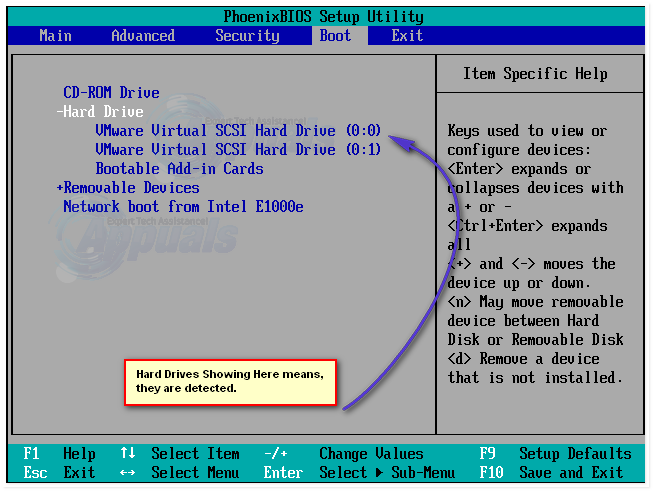 If the HDD is listed in your computer’s boot order but your computer still fails to boot into its Operating System, it would be best if you move onto Method 2 to determine the exact status of your HDD.

It your HDD is nowhere to be found in the computer’s boot order, attempt to modify the boot order and see if the HDD is listed in the available options. If the HDD is not even listed as an available option when you choose to modify your computer’s boot order, there is a pretty decent chance that it has already failed or is failing. Even though that is the case, it is recommended that you move onto Method 2 and run diagnostics on your HDD just to be sure that it is, in fact, faulty.

If your HDD is not visible in your computer’s BIOS settings or if it is visible but fails to boot into the Operating System, there is a pretty good chance that it has already failed or is failing. However, if you want to be sure of your Hard Disk Drive’s status, you will have to run diagnostics on it. Running hard drive diagnostics basically involves running a horde of different tests on an HDD to determine whether or not it is fit for duty and whether or not it has failed or is failing.

Before you can actually boot into the Hiren’s BootCD interface and start running diagnostics on your computer’s HDD, you will actually have to burn an ISO file of Hiren’s BootCD to a bootable media. To do so, you will need to get your hands on a working Windows computer, download an ISO file for Hiren’s BootCD from here and then burn it to a CD, DVD or USB drive using this guide.

Some of the best HDD testing and diagnostics utilities that are included in the Hiren’s BootCD package and are also capable of running diagnostics on HDDs of any and all brands include HDDScan, ExcelStor’s ESTest, MHDD, Victoria and ViVard. However, if you would like to determine whether or not your HDD has failed or is failing using a tool designed specifically to test HDDs of the same brand as yours, the Hiren’s BootCD package also includes the latest versions of the HDD testing and diagnostics tools designed by Western Digital, Fujitsu, Samsung, Maxtor, Quantum, SeaGate and IBM for their Hard Disk Drives.

To run this test, choose Dos Tools, and then Hard Disk Tools which is the option 6.

From here, we recommend running MHDD 4.6 which can also do a mechanical check or SmartUDM 2.00. If your drives support SMART, then you should be able to read their state from either of these programs.

How to: Check if Your Hard Disk Has Failed or Failing