Steam is a complex program which handles a lot of different processes and you might not be aware of some of them. Because of that, it’s logical to expect things to go wrong at a certain point and it may not even be Steam’s fault. Different computers have different settings enabled and it’s impossible for Steam developers to predict the behavior of every single scenario. That is why users sometimes struggle with the issue where they don’t know what is causing Steam to misbehave and it may turn out to be something totally unexpected.

The issue usually starts when users notice that their downloads are malfunctioning and they keep stopping for no apparent reason or cause. That is when they try all sorts of different fixes and one of them usually includes reinstalling the Steam client and redownloading games from scratch since the issue may lie in some of the game folders. However, users who experienced their issue and who tried to reinstall Steam from scratch encountered another issue where Steam starts searching for new updates and finds a small update after which it’s successfully downloaded. However, Steam unexpectedly crashes after briefly showing the “Extracting Package” message.

It turns out that fixing this issue is rather simple but unexpected. However, some users claim that simply moving the package from its original folder will cause Steam to redownload it and that should have fixed the issue. This fix has not been verified by anyone and it turns out that even another reinstallation of Steam does not fix this issue at all.

Locate the wireless driver in Device Manager and proceed with either of these options and the problem should be taken care of once you reinstall Steam again.

In Case This Didn’t Help…

Right-click on the Steam client and select Run as Administrator. Some users claim that this fixed their issue completely. 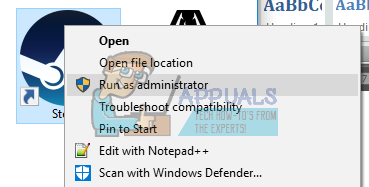 One of the possible fixed also includes these steps:

In case none of this works, the problem may be with the package and you should consider removing the “Package” folder from the Steam folder and moving it to a new location. This should prompt Steam to redownload the package and the problem should then be taken care of. The “Package” folder is located directly in the Steam folder, usually in Program Files.