Steam Family Library Sharing is one of the most useful features Steam could have offered to its users. It allows multiple users to use the same Steam library games after a process of verification. Each of the maximum 5 allowed accounts can use the same library on 10 different devices and it’s important to state that only one of the users can use the library in any instance. This means that only one user can play a game and others have to wait for him to disconnect and they cannot play any other games from the shared library as well.

The library owner needs to authorize both the account of another user and his device by logging in with his account. Requests are authorized via emails and it should be noted down that there are certain games which don’t allow this sharing. It’s also important that you have the Steam Guard enables in Steam.

A lot of users make a mistake where they forget to have the library owner log into their device in order to authorize your computer. This is a vital step which needs to be undertaken even if your account name is already on your friend’s (library owner) eligible accounts list.

Uninstalling Steam may also lead to data loss which means you might need to go through with the process once again if one of the participants of family sharing uninstalls Steam. Additionally, if the real library owner wants to play one of the games from his library, the user who is currently using the game will receive a notice letting him either buy the game or he needs to disconnect in five minutes. The games may not even show up if you are trying to play someone else’s games if there is another person using them. 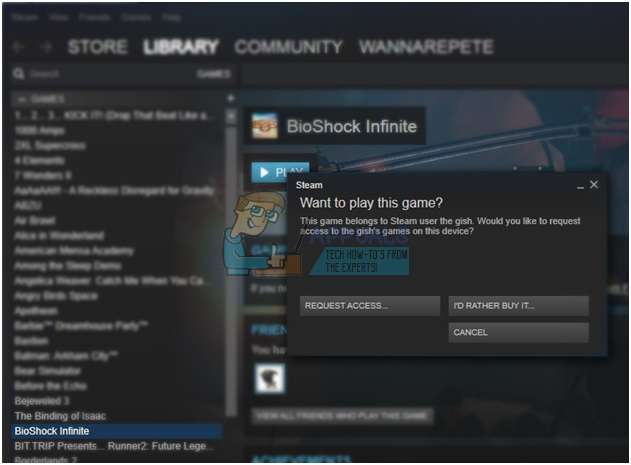 Note that not every game can be shared and only one user can play these games at a time. This may cause a lot of confusion but know that you won’t be able to play the game if either the real owner or someone else he is sharing with decided to play.