Despite ChatGPT’s continued success online, there may be a price to pay. On Saturday, several customers turned to social media after discovering a new “Upgrade plan” option on the ChatGPT web interface, which when clicked brought up a window with two options.

The Free Plan allows you to continue using ChatGPT in the same manner as before, but a new Professional Plan enables you to increase the AI chatbot’s functionality with less erratic availability, quicker reaction times, and “priority access to new features.” If it has been pushed out to you, the new upgrade option may be found on the left slide menu. As of this writing, we aren’t experiencing it, therefore it’s probable that the feature is only available to select people or in some areas right now.

Are you ready to pay $42/month for professional version of ChatGPT? pic.twitter.com/xavIM3a9K4

It’s hardly surprising that this was included. OpenAI, the AI research firm behind ChatGPT, revealed a waitlist for a Professional tier with the aforementioned benefits earlier this month on its Discord channel. According to the ad, anyone who signed up will be contacted to “set up a payment procedure and a pilot.” Although OpenAI has not yet disclosed price information, the Professional Plan has been offered at $42 per month, so there is no simple one-time payment required. 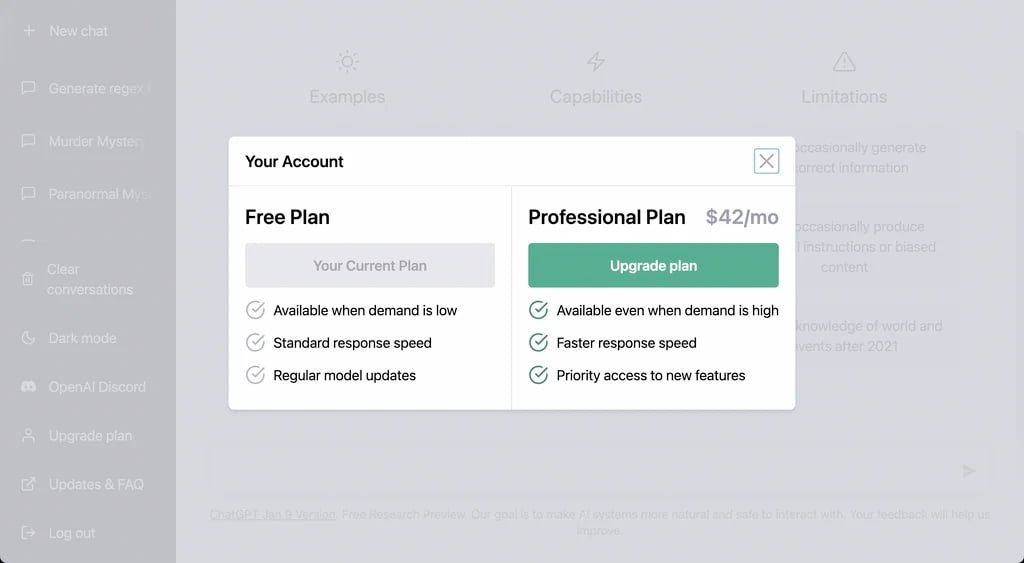 The LLM-based ChatGPT has gained enormous popularity since its launch in November of last year for creating texts and ideas from scratch, including elaborating on complicated ideas, writing code, creating poetry, and other activities.

ChatGPT has also made its way into the commercial industry with companies like Microsoft investing $10 billion into the company. Microsoft has allegedly been testing the incorporation of OpenAI’s language AI technology into its Word, PowerPoint, and Outlook software. The Information claims that Microsoft has been working to further incorporate the OpenAI GPT model for text generation into Word, PowerPoint, and Outlook. An unnamed variation of the model was previously included in Word’s autocomplete feature.

Apart from investments, ChatGPT has also been a source of criticism and concerns for analysts as well as tech giants like Google. The New York Times reported that the recent release of OpenAI’s chatbot ChatGPT has sparked security worries for Google. Executives at Google were allegedly worried that fast adoption of the technology may hurt the company’s reputation.

The GPT models developed by OpenAI have taken the internet by storm with some highlighting it as a “technological advancement” while some think it as the potential reason for their unemployment. It would be interesting to see how AI changes the future for the better or the worse.