There’s no denying that Bluestacks is one of the most popular Android emulators out there. But unlike any other Android emulators, Bluestacks always has an aura of uncertainty around it. Some people think it’s safe to use, while others have had some experiences that made them raise some security concerns about the cross-platform Android Emulator.

If we were to lose the technical jargon, BlueStacks is a free Android emulator for PC and Mac that currently holds the biggest market share. Android emulators enable desktop OS users to run Android apps and games that were normally designed to run on an Android smartphone or tablet. They also allow users to be able to run .apk files on a computer.

Since the Bluestacks platform is mainly focused on gaming, most users are using this Android emulator to play popular games like PubG Mobile, Candy Crush, Temple Run, etc. There’s also a user segment that makes use of Bluestacks to run mobile-only applications like Viber, Snapchat, etc.

Bluestacks is a project developed after a shared investment made by Intel, Samsung, Qualcomm, and AMD.

Perhaps the main reason why users are suspecting that this Android emulation software isn’t safe is the fact that some 3rd party security applications like McAfee and Avast might detect the main BlueStacks executable as a threat.

But as it turns out, the vast majority of these reports turned out to be false-positives. And even in those cases where the executable was actually infected, no evidence was found that the file was already infected when Bluestacks was installed. 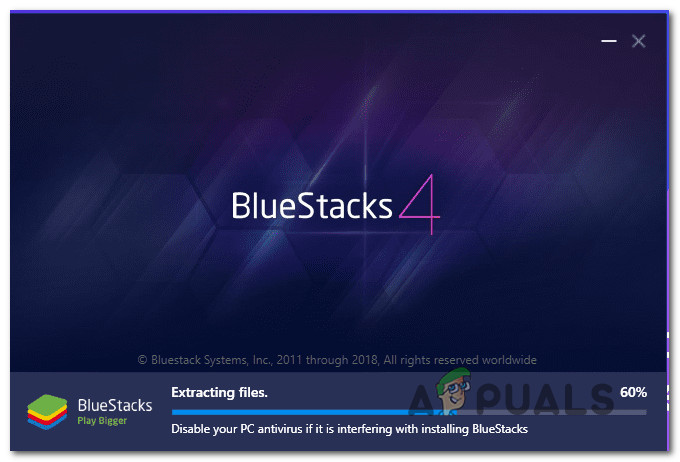 We scanned this Android emulator with several of the most efficient security scanners and we found no evidence of a malware infection. With this mind, you can rest assured that this Android emulators software doesn’t come pre-bundled with any malware or adware software.

Of course, we can only vouch for this if you download the platform from the official download page (here), not from a third-party source.

Another popular reason why people are wondering whether BlueStacks is safe is performance issues. The uncertainty comes from the fact that even with medium-spec computers, some users are still reporting that Bluestacks is crashing quite regularly and eating away quite a lot of system resources.

Because BlueStacks has such a high CPU & RAM usage, some people are suspecting that the software might be used for crypto-mining or other similar practices without the user’s concern. Fortunately, we found no evidence of this activity.

Furthermore, we looked into various expert opinions on this matter, and it turns out that high CPU & RAM  usage is normal when emulating an Android environment is very normal, even on high-end PC configurations. This happens because Android and desktop operating systems such as PC and MAC have a very different architecture, so resource efficiency is not really on the table in this matter. So you want to consider uninstalling BlueStacks if you have performance concerns because they won’t go away soon.

Why the latest BlueStacks versions are the safest

If we were to take a trip back to when BlueStacks was just beginning to gain popularity, there was a lot of uncertainty on the revenue model that was being used. Just a few years back, Reddit was filled with threads encouraging people to stop using BlueStacks. Here’s one example. Why?

The problem was that in order to keep using it, you either had to pay the creators or download apps & rate them (as per the program requested). This surely wouldn’t have caused this much controversy if the apps that weren’t surrounded by uncertainty. But back then, there were increasing concerns that some of the apps that were included in the download & install program actually contained adware.

And to make matters even worse, the original Bluestacks version didn’t even include an uninstaller. Even more, the main program folder was made read-only so users were not even able to delete the folder containing the BlueStacks files.

Fortunately, this phase only lasted for a couple of months. Realizing that this approach was going to stop them from growing, the creators let go of the download & rate program and made the software free. All the latest versions include an uninstaller and the main program folder is no longer read-only.

The bottom line is, most of the discussions that you see online regarding the security problems of Bluestacks are no longer applicable. The latest versions (that came out int he last two years) have raised no security questions.

Choosing Bluestacks is the equivalent of choosing Samsung when you’re in the market for a new Android phone. Just as Samsung holds the biggest market share in the smartphone market, Bluestacks is the mainstream option of all Android emulators.

Aside from the fact that it’s compatible with both Windows and MAC, it’s regularly maintained with updates and bug fixes, so you can expect a seamless experience.

Almost every feature of Bluestacks is designed to accommodate gamers. One of the most popular features that make mobile gaming migrate to this platform is the ability to launch multiple instances of the Bluestack applications – this makes it possible to launch multiple games at once (or the same game multiple times). If you use farming practices to level up quickly in your games, multiple instances will help you do this quite easily.

But keep in mind that the number of instances that you’re able to run at once is dependable on your PC specifications.

Another question that a lot of users that are considering Bluestacks have is if the software is illegal or not. It’s a legitimate question, especially if you were to look into most Nintendo or Gameboy emulators.

Although you might be tempted to put BlueStacks in the same pot as Nintendo/Gameboy/Gamecube emulators, you shouldn’t do this. Nintendo emulators are illegal because they include software copies of physical games inside the system hardware ROM in order to work. This is a classic example of piracy.

However, Bluestacks has a different environment to work with. As you might know, Android is completely open-source. Even though Google apps are Google’s own property, BlueStacks doesn’t violate any policies. The platform comes pre-bundled with Google Play Store (this is part of an agreement between the two parties) and you the Play Store will treat your BlueStack platform as any other Android device. No discrimination whatsoever.

So to conclude this chapter, BlueStacks is completely legal as it runs an open-source OS and has the necessary permissions to include & support the Google Play store.

Does BlueStacks collect your data?

The answer isn’t just a simple yes or no, BlueStacks itself doesn’t collect your personal data according to them. However, they do collect the telemetry data of your Emulator and it collects your Computer Specifications for diagnostic and improvement of the BlueStacks they also collect some other information (such as your hardware model, operating system version, unique device identifiers, and mobile network information including phone number) but they don’t collect data from any third-party application you have installed on your BlueStacks.

Keep in mind that they don’t have much control over the data collected by third-party applications. So it really depends upon the privacy policy of that third-party app you have installed on your computer.

So if you’re after for the definitive conclusion, then Yes. Bluestacks is Safe. We found no evidence of malware, spyware or crypto-mining.  As of now, Bluestacks is 100% safe. All security certificates are signed and no secondary applications are ever bundled.

But keep in mind that BluStacks only acts as a virtual machine. It’s your responsibility that you install only trusted applications from the Google Play Store.

BlueStacks: Is it Safe?