Laptops are supposed to be compact and lightweight portable machines. You carry one around every day for doing some studying, preparing a presentation, or watching TV shows or movies. But what if you want to play games? As a lot of new games require a lot of raw power, laptops need to accommodate high-performance graphics cards in the chassis to properly run those titles. 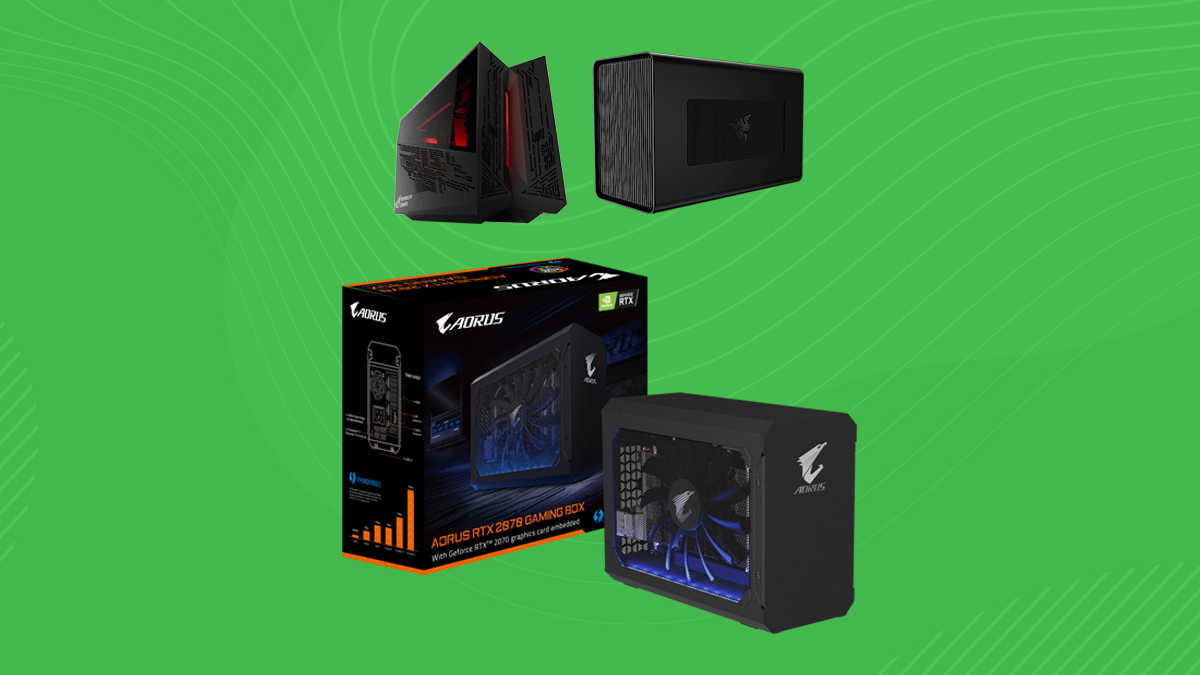 This makes gaming laptops big and heavy, which defeats the purpose of portability. But what if you want a portable laptop that you carry around every day and also do some serious gaming on it? Well a few years ago that would have been a laughable dream but thanks to external graphics card enclosures, portable gaming is easier than ever. 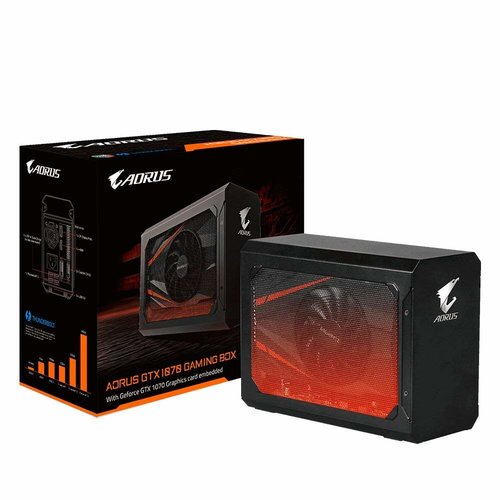 This is one of the smallest graphics card enclosures around. It’s aptly named the Gaming Box as its design is pretty minimal and straightforward. That doesn’t mean it looks bad by any means. It’s a small enclosure made of matte black aluminum with mesh panels on the sides for your GPU to breathe. It takes up very little space on your desk and is actually pretty portable because it comes with a carrying case. There’s also RGB lighting here on the mesh side panel.

Going back to the GPU, the one we’re focusing on right now has Gigabyte’s own GTX 1070 mini. Despite the small form factor, it has the same performance as the full-sized 1070. As for ports, you get HDMI 2.0, Displayport 1.4, and two DVI ports from the GPU itself. Apart from that, we have the usual Thunderbolt 3 port, four USB 3.0 ports (one of which has quick-charge support for your phone).

Getting the Gaming Box up and running is pretty simple, just plug it into a wall socket, plug in your Thunderbolt 3 cable, download drivers from Nvidia, and your done. The Gaming box works with a huge list of Thunderbolt 3 equipped laptops with ease. As for performance, it’s about as good as it can get with an eGPU. Sure it’s not as fast as a desktop setup, but it’s only about 10-15% slower depending of course on your laptop specs. This is an impressive performance from an eGPU.

Overall, the Aorus gaming box is an easy recommendation. It’s small, portable, designed well and the performance truly delivers. Support is also not an issue as the Gaming box will work with dozens of laptops. The only issue here is upgrading the GPU down the line. Sure, the GTX 1070 is a great performer for now but in the future, it might not be up to par. The GPU can be removed but it only has support for small-sized cards like the 1070 mini inside.

When it comes to laptops, Razer is known for one thing. Powerful performance in a small package. This is what their blade laptops were designed for. Love em or hate em, they were the first ones to popularize external graphics card when they launched the Razer Core with their lightweight Blade Stealth laptop. They are still one of the few companies that have nearly perfected the external graphics card setup. They went back to the drawing board with their new Core X and they did not fail to deliver.

The Razer Core X is designed to look very sleek. The whole matte black aluminum frame looks very minimal and stealthy. As this is their cheaper option compared to their Core V2, there is no Chroma lighting here, a bit of a bummer for hardcore Razer fans. Apart from that, the enclosure can house even the largest graphics cards with ease. It has support for a wide variety of GPUs, ever triple slot cards. The disappointing thing here is that there are no extra USB ports on the back.

Moving on from the design let’s talk about other features. Our favorite aspect here is the huge 650W power supply which can power most of the demanding GPUs. It can even charge any laptop with a 100W of output, a feature we all should appreciate. Another clever feature integrated into the design is that it has a handle on the back, so you can pull out the GPU slot in the enclosure and easily add-in a graphics card.

As for support, while it officially supports most Razer laptops, it will work fine with any laptop equipped with Thunderbolt 3 (with 4 PCIe lanes of course) and software is not much of an issue. Just install the drivers for the card and you are good to go. People even got it working for their MacBooks.

All in all, for the price the Razer Core X is an excellent product that works well. It’s not even that heavy or space-consuming. The only complaint we have is the lack of USB ports. Apart from that, even though it’s a bit pricey it’s still one of our favorites only second to the great value that is the Aorus Gaming Box.

Here’s a name you probably haven’t heard before. This eGPU is called the Node from Akitio, stylized as AKiTiO. Regardless of the name, this is a surprisingly phenomenal graphics card enclosure that has a large list of support with different GPUs and different laptops. It even has Mac support but only with AMD cards. But at nearly the same price as the Razer Core X, is the Akitio Node worth it? Let’s quickly find out.

Design-wise the Node is decent enough but nothing impressive. Like others on this list, it’s made of aluminum and has a simple box-type design. The aluminum is anodized silver. In terms of size, it’s much larger than the Core X and the Aorus Gaming Box. It even weighs a considerable 15.2 pounds (roughly 7Kg). Even though it comes with a carrying handle that helps take it around, it’s not really built for portability.

The Node has a 400W power supply which is sufficient for most GPUs. Speaking of graphics cards, it supports the most full-size graphics card. Ventilation is also not much of an issue although the internal fan can get a bit loud at full load. Apart from that, the Node works well with most laptops and a variety of GPUs. It even works with macOS, albeit only with AMD GPUs.

All in all, this another solid option for an eGPU but the problem is the size and pricing. At nearly the same price as the Core X, Razer’s offering looks better, it’s smaller and has a larger power supply. Both do not come with extra USB ports which can be disappointing. If you can find the Node at a lower price than the Core X, then it makes much more sense.

The ROG X2 Station 2 from Asus works well just like other external graphics cards on this list. But since this is a ROG product, the design seems to be the highlight here. No doubt, this is the best-looking eGPU on this list. Unfortunately, when you look past the design, the ROG X2 works just like any other eGPU and it’s difficult to recommend at such a high price.

The ROG X2 sports a very aggressive design with angular styling and impressive RGB lighting. Build quality is not compromised here in any way. Simply put, this is the best-looking eGPU out there right now. The small glass window on the GPU side looks pleasant and eye-catching. The chassis itself is big and heavy but it supports full-size GPUs with no problem. It even has a few small internal fans for better ventilation compared to other enclosures. It has a 600W power supply which can easily support any high-end GPU

Sadly, once you look past the design, at the high price Asus is asking for this, the ROG X2 starts to fall apart as a sensible buy. Sure it works fine with most laptops and doesn’t have any issues in performance but at the high price point, it’s hard to recommend. The only reason this one is worth considering is if you absolutely love the design.

The HP Omen Accelerator is big, bulky, and portable is basically thrown out the window. But we’d be lying if we said this e-GPU doesn’t look good. Not only that but it is jam-packed full of a lot of features. As much as we’d love to rank this higher, the huge form factor is seriously an issue for a lot of people. If you can look past that, this is an amazing e-GPU.

The OMEN Accelerator resembles HP’s lineup of OMEN gaming PCs. The design makes it look like a mini version of their desktop towers. It’s certainly unique among other eGPUs. There are also plenty of ports on the back including USB 3.0 ports, an ethernet port, a secure lock port, and of course Thunderbolt 3. It houses any full-size graphics card with no problem.

In terms of performance and compatibility, it works with a wide variety of laptops and GPUs. It even works with dual PCIe lanes Thunderbolt 3 ports, although obviously, the performance will take a huge dip. A great bonus feature here is the support for adding a hard drive or SSD. Yes, it has an internal mount for attaching a solid-state drive or mechanical hard drive. These will also connect through Thunderbolt 3.

All in all, this is a great option for taking your gaming experience to the next level. However, the huge size and power draw might be dealbreakers for some people.