I remember the good old days when I would spend an entire afternoon updating the playlist on my Nokia N95, so could listen to music on my way to school. Back then Symbian still ruled the world and nobody realized how limited our customising options really were. Android opened up another window of expectation for the vast majority of smartphone owners. Users are know actively trying different variations to achieve the same functionality.

But Android also changed the way we listen to music. Music lovers started experimenting with their own presets that modified different elements of the original sound. There’s something special about tweaking an equalizer’s settings until you get the sound that works for you.

Now the trend is heading towards apps like Spotify or Google Play Music, mainly because it’s so much more convenable to access an entire plethora of music anytime. Even though it saves a lot of space, an old-timer like me finds them very limiting. All those tracks are DRM protected and can’t be played by a 3rd party music player. This translates into virtually no advanced control over your music since most of these apps don’t have an equalizer.

If you like to make the most out of your headphones, you need an equalizer that will allow you to adjust the bass and treble however you prefer them.

Other things you should know

Before we get to the actual list, I want to get some things out there first. For starters, every single equalizer without system-level permission that you can find on Google Play has the same basic functionality. All of them use Android’s AudioEffects class to apply audio effects on a sound session.

Unless you have built-in equalizer like HTC’s Beats or you’re rooted, the only differences between most equalizer apps will be in terms of interface and features. The way the AudioEffects class is built doesn’t allow an equalizer without system permissions to control the sound from more than one app at a time. Oh, and be advised, not every equalizer app will work with every music player. If you ever searched for an equalizer on Google Play, you already know it’s a giant, inconsistent mess. The vast majority of them don’t have system level permissions, so you might find some that won’t work on your device properly.

Now that the long and boring equalizer lecture is over, let’s review some equalizers. To spare you from the trouble of installing 100+ different equalizers, here’s our list of the very best.

Equalizer & Bass Booster works so much better with a solid pair of headphones. The equalizer and bass boost do a good job for the most part, but I was a little disappointed with the surround sound feature. It seemed buggy and I could hear a series of unnatural noises in the background. 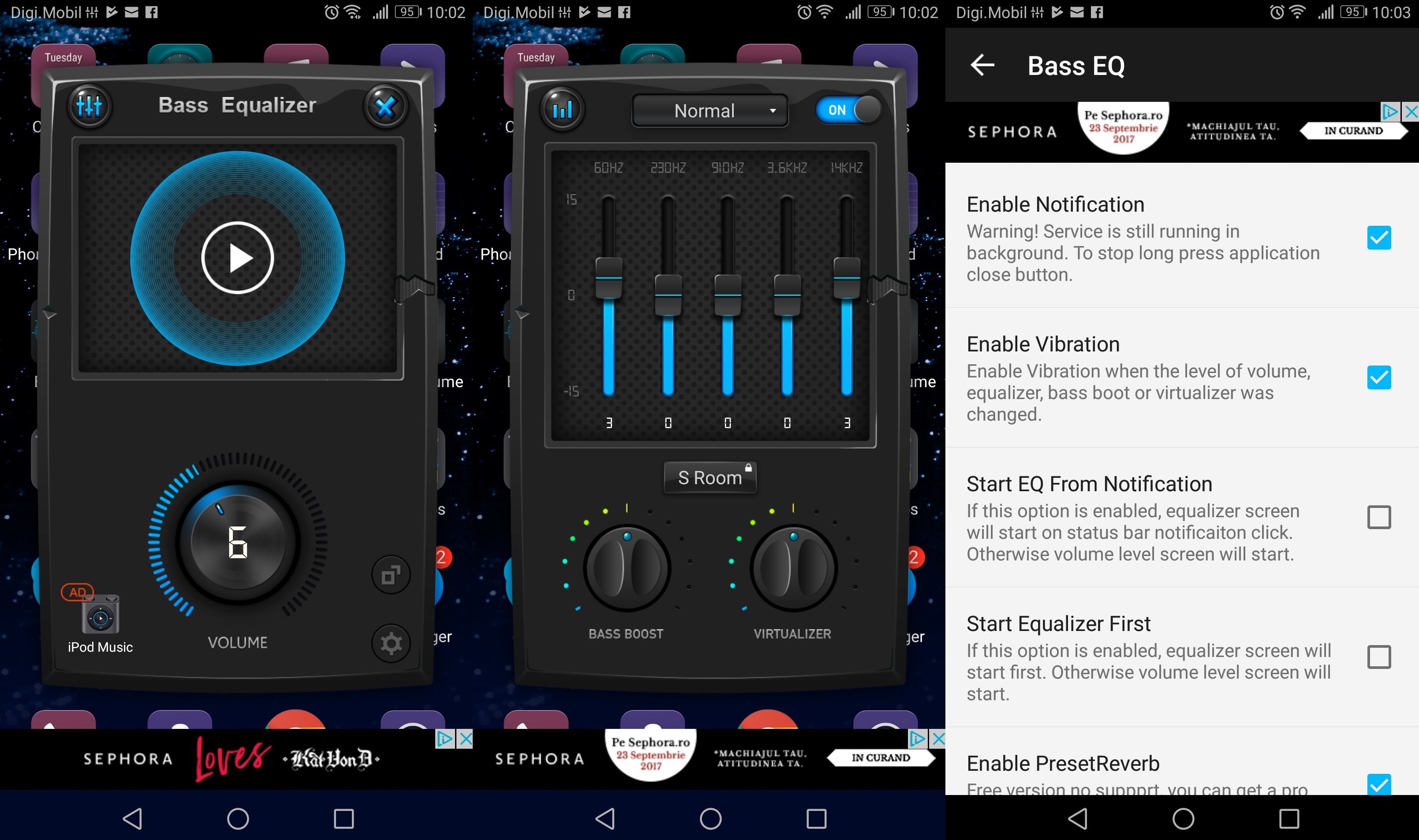 In terms of interface, I liked what they were going for. The equalizer looks like an MP3 and won’t take up the entire screen, creating a 3D effect of sorts. You can adjust the sliders of five equalizer bands and toggle various virtualizer effects.

If you’re a preset guy, you can choose from a selection of 10 standards presets. There’s also a neat Stereo led VU meter, but it doesn’t really do anything else besides looking good. For me, a major turn-off was the abundance of ads that occasionally interfered with my tweaking.

From what I gathered, this app doesn’t work with most radio FM players and some users have reported incompatibilities with some 3rd party music players.

Do not be fooled by the name. This app does a lot more than, well, equalize. It’s an all in one music player, bass booster, and equalizer.

The equalizer is one of the best from this list, featuring seven control bands and a super powerful bass booster. The ads are minimal, and the interface is more than I hoped for. 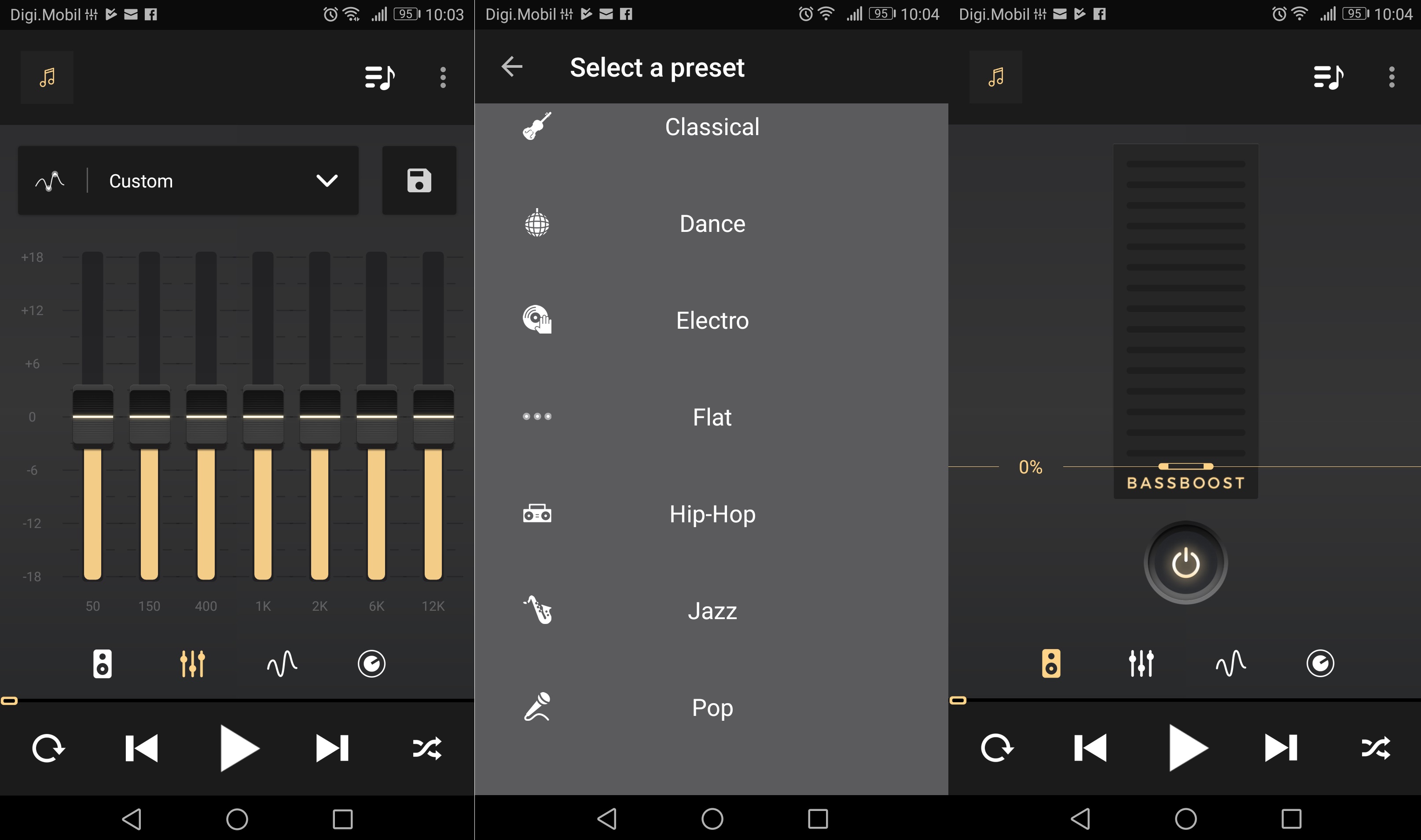 You have 10 predefined presets to choose from including classical, dance, electro, hip-hop and jazz. The app will automatically achieve smooth transitions between the tracks unless you disable the feature from the settings menu.

All in all, Equalizer+ is a quality, easy-to-use app with a beautiful interface that helps in smoothing things around. Since it has a built-in Music Player, you don’t need to worry about compatibility issues.

I love simple interfaces, so I may have been subjective when featuring this equalizer. Well maybe not, because Equalizer has an impressive list of sound effect levels that will help you get the most out of your headphones. 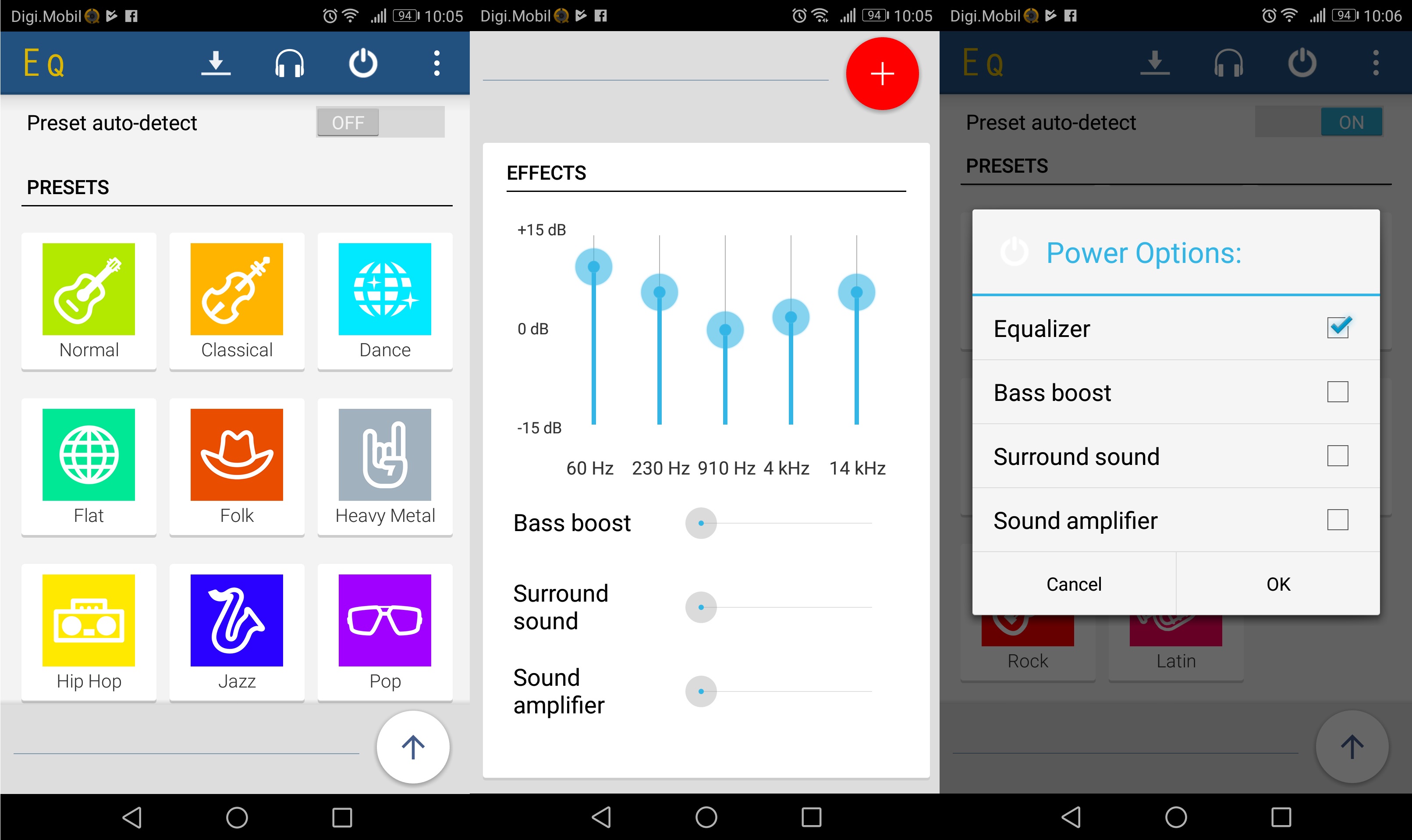 You can apply presets based on the genre you’re listening to or you can quickly create your very own custom preset. The equalizer offers a 5 band controller with additional audio effects including a bass booster, virtualizer, and a reverb. If you use Pandora or Spotify, you will be happy to know that Equalizer is fully compatible with most music streaming apps.
Equalizer works best with Google Play Music, Meridian Mobile, and Omich player. I didn’t like the fact that the app forced me to grant the Internet_Permission in order to download a bunch of widget skins. Let’s face it, nobody uses widgets anymore.

Music Volume EQ has a five-band equalizer with a solid bass booster and various 3D Virtualizer effects. I really liked how the live music stereo led VU meter is designed, it reminds me of Winamp. 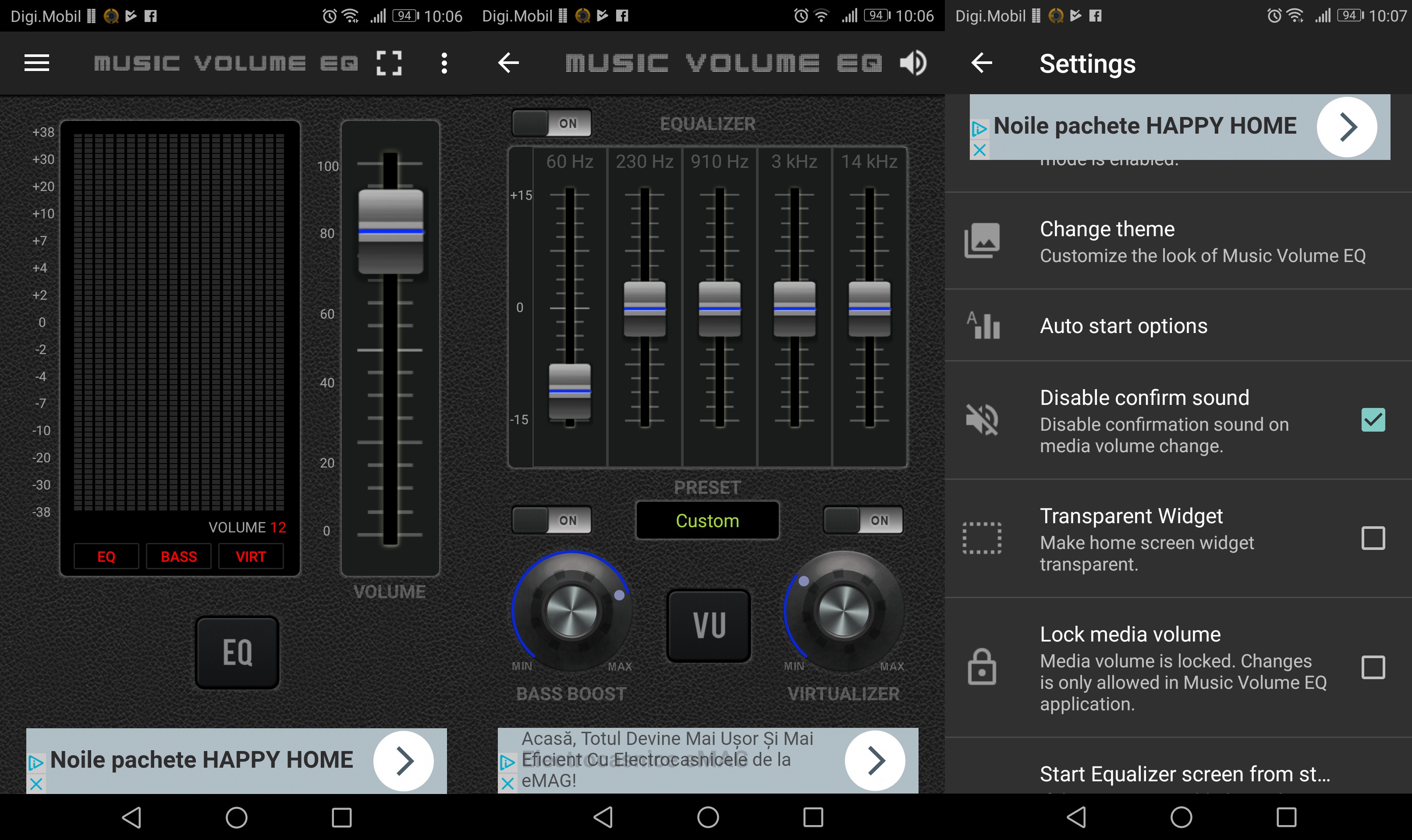 The equalizer is the best it could be, considering the fact that the app doesn’t have system-level permissions. I really liked the loudness enhancer that made an old pair of headphones output considerably louder audio. But keep in mind that this feature only works for Android version 4.4 or higher.

I have tested this equalizer with 4 different music players, and it worked just fine with all of them. Music Volume EQ scores some big points by allowing users to save their custom presets. Most of the other apps pushed this feature to the PRO version.

Again with the simplistic interface, you guys are killing me. But on a serious note, you should really give this app a chance, regardless of my UI preferences.

Equalizer FX includes an audio filter that will allow you to change the frequency envelope of the sound. The bass boost effect will amplify low frequencies of sounds, but it’s not perfect in conjunction with every preset. Speaking of presets, you have 12 to choose from, as well as the ability to create your own. 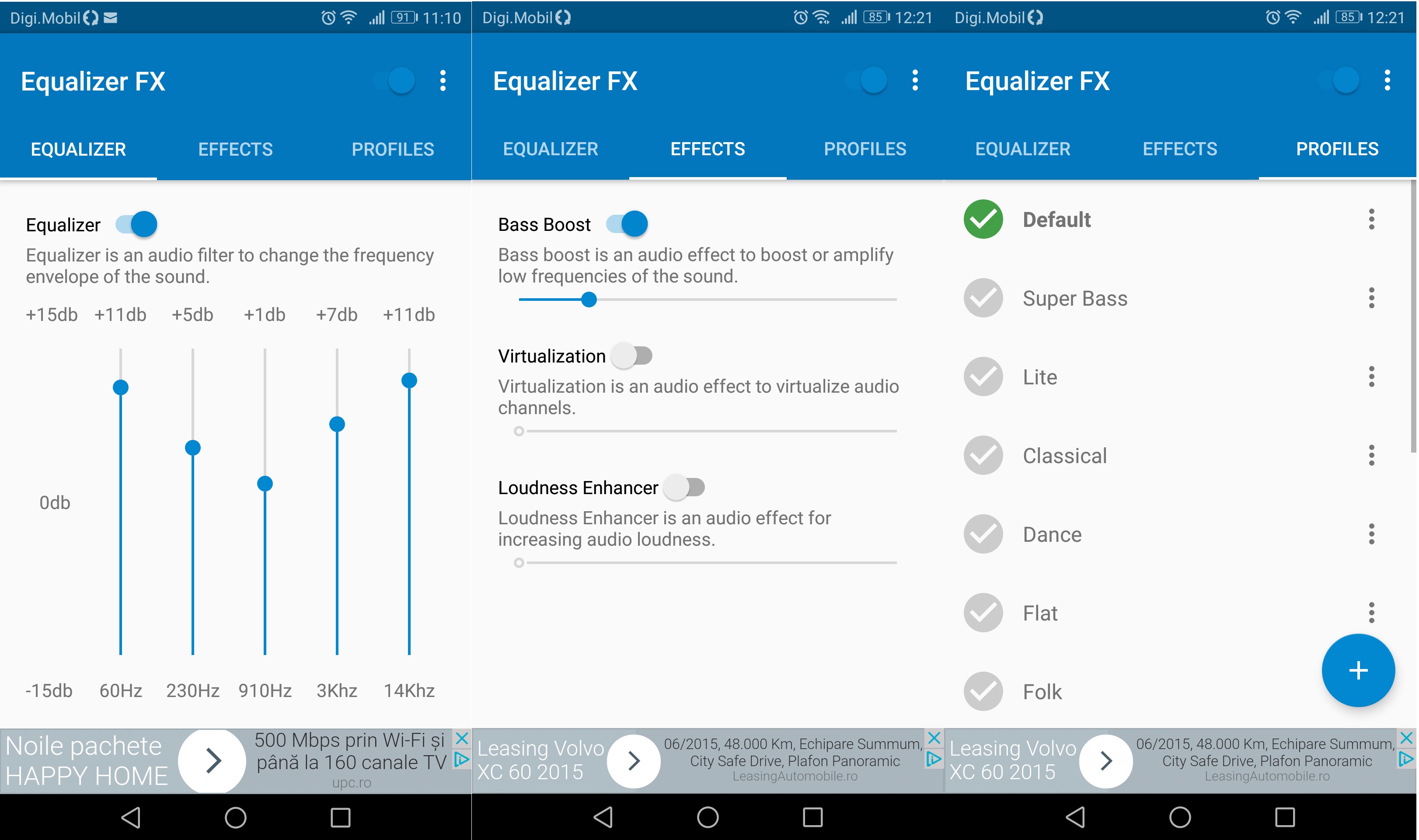 You can make use the virtualization feature to enhance the overall stereo effect. You also have a loudness enhancer, but it will only work on Android 4.4 or higher.

If you listen to FM radio do not install this app as it isn’t compatible with most built-in radio apps. On the plus side, it’s fully compatible with Pandora, Spotify, TuneIn Radio and VK.

This app is pitched by its developers as an offline music player rather than an equalizer. But I decided to include it on this list because the equalizer has an impressive list of powerful features. 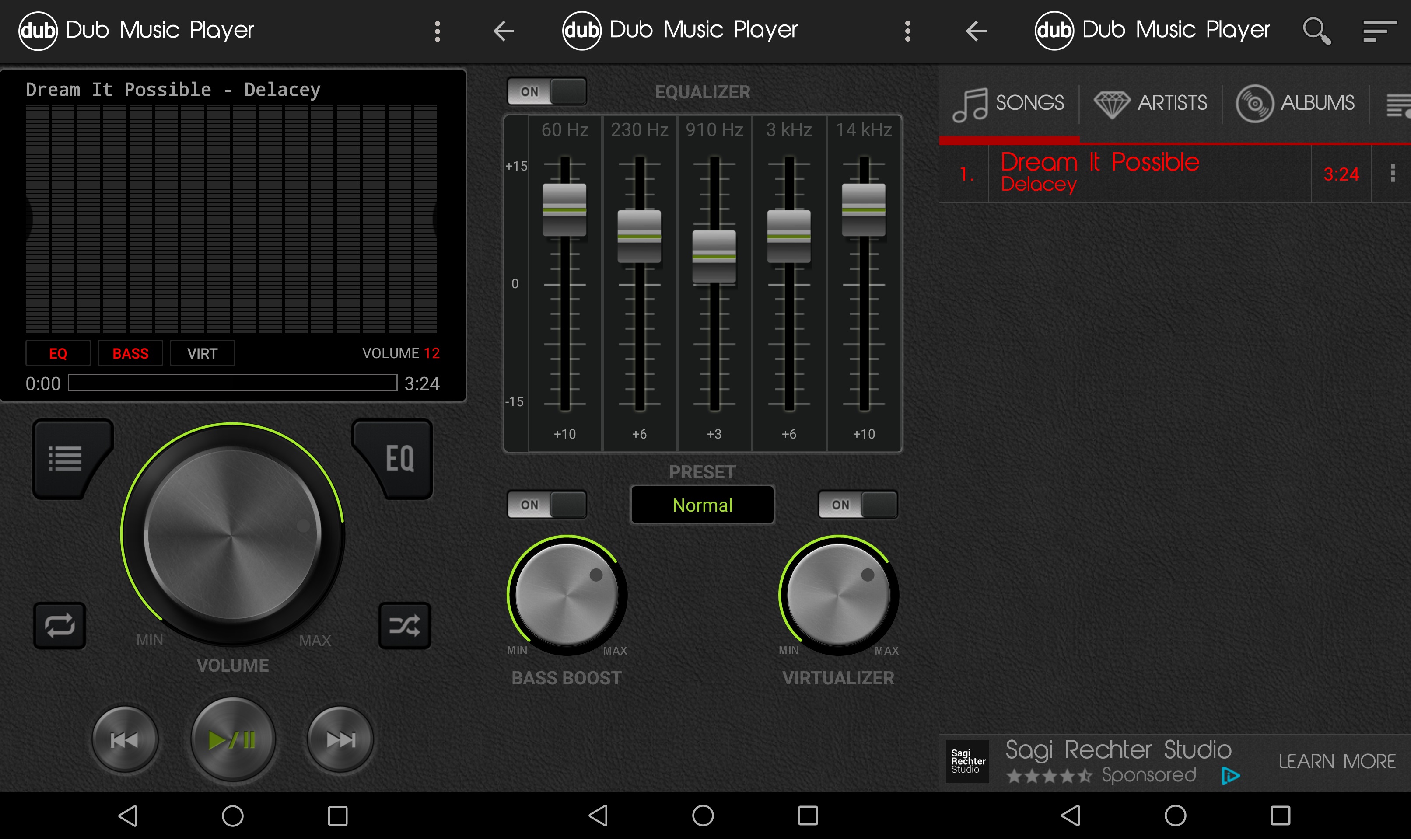 The equalizer consists of five bands and will allow you to pick from a list of 9 presets, but you also have the ability to create your own. It’s capable of working with all of the most popular sound formats including MP3, WAV, AAC, FLAC, 3GP, and MIDI.

Aside from the crossfade effect, the app has a loudness enhancer, speed control, pitch control, bass boost and a virtualizer. I don’t know if it’s a common occurrence or not, but I experienced lower volumes than I normally have when using this app.

If you own an expensive pair of headphones or earbuds, this is the app for you. Headphones Equalizer will allow you to tailor equalizations presets that will adapt to the headphones you are using.

You start by adding your brand of headphones to the app. You can opt to calibrate them automatically or do it yourself. Once that is out of the way, you can add even more to your audio experience by enabling bass boost and correction attenuation. 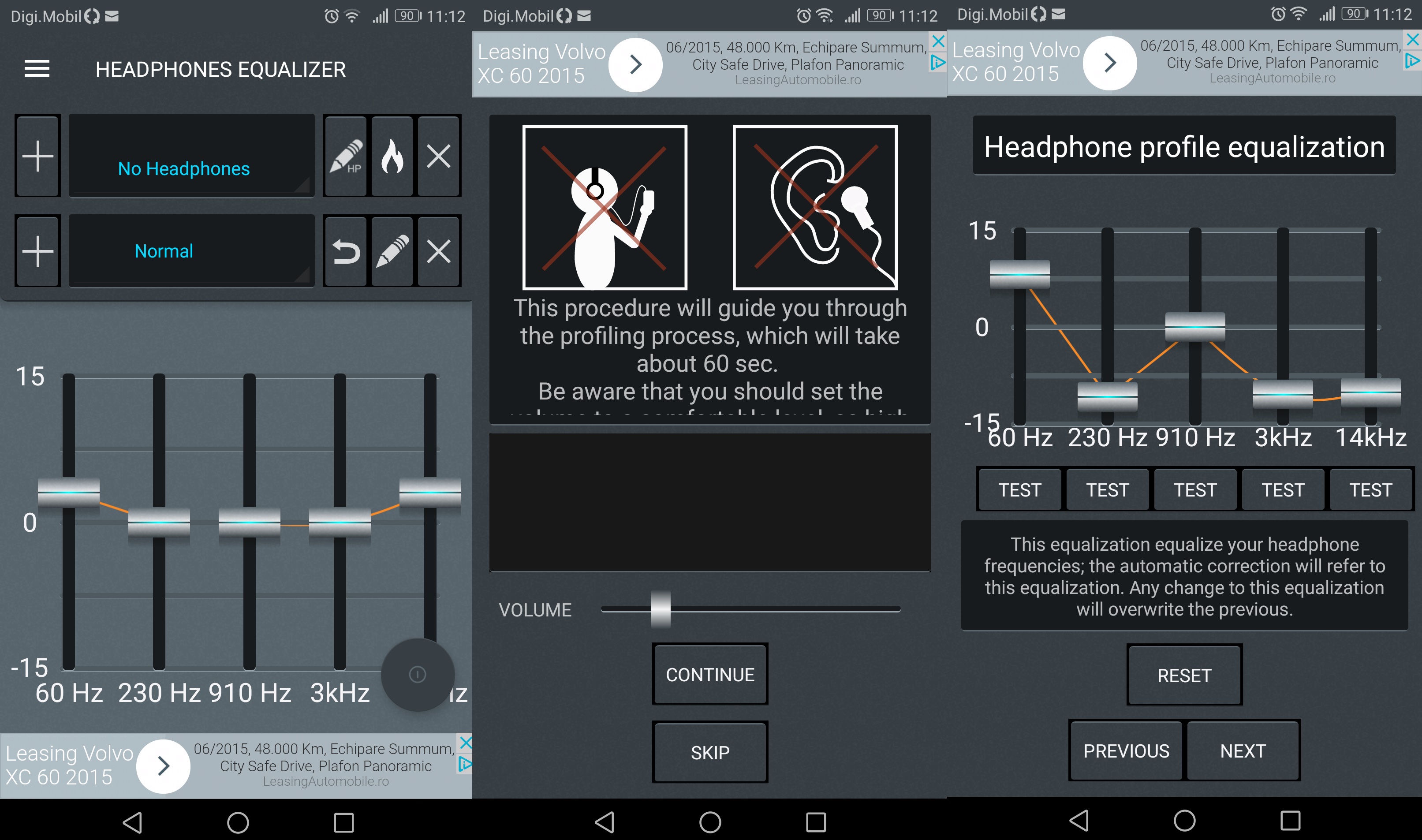 Oh and don’t forget to check out the auto genre function. With that enabled, the app will automatically try to retrieve the current artist genre and adjust the equalizer based on the style of music.

If you like to calibrate the sound manually, you’ll have three interactive knobs to play with. You can control the bass, midrange, and treble with them. The app has an integrated music player, but you can use the equalizer with other music players as long as you don’t play more than one sound at the same time.

Music Equalizer & Bass Booster will let you choose from a list of 8 professional music genres. But you can also adjust your tracks using the five-band equalizer to create your preset. If that’s not enough, play around with the bass booster and virtualizer to enhance the overall quality of the sound. 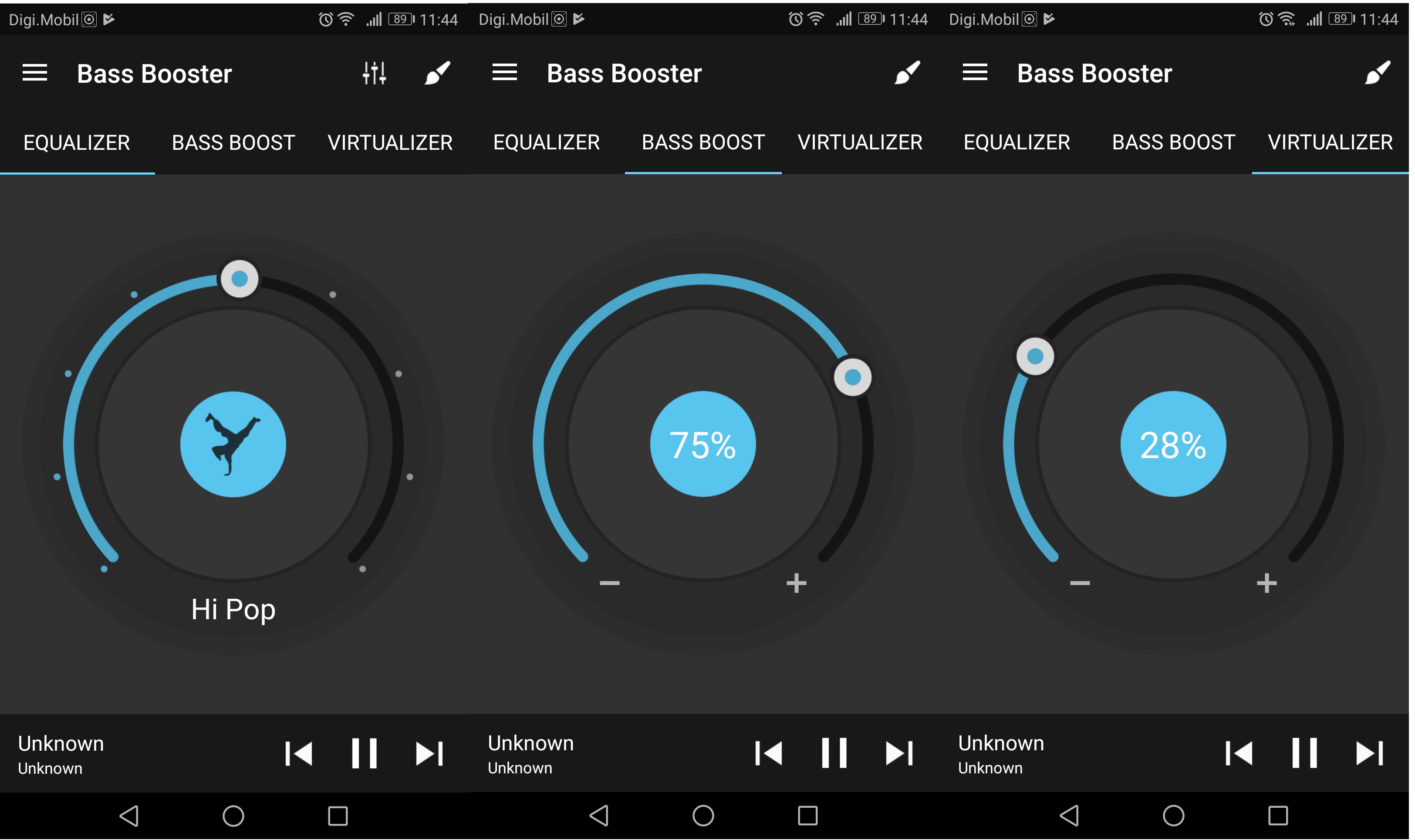 I like the interface of the app, but what really caught my eyes was the wonderful visual sound spectrum that gets played when you listen to a song.

If you want to customize your experience even further, you can use one of the 12 color themes. I encourage you to try this app with headphones, as the virtualizer and bass booster may not be noticeable on your phone’s speakers (unless you own a Axon).

This app works with a five-band equalizer. You have 10 professional music genres to choose from, including hip-hop, rock, dance, pop, classical, latin and metal.

The music stereo LED VU meter is one of the best I’ve seen. The visual sound spectrum is very diverse and will definitely draw you in. The flow of the visuals moves according to the audio rhythm, adding to the overall experience. 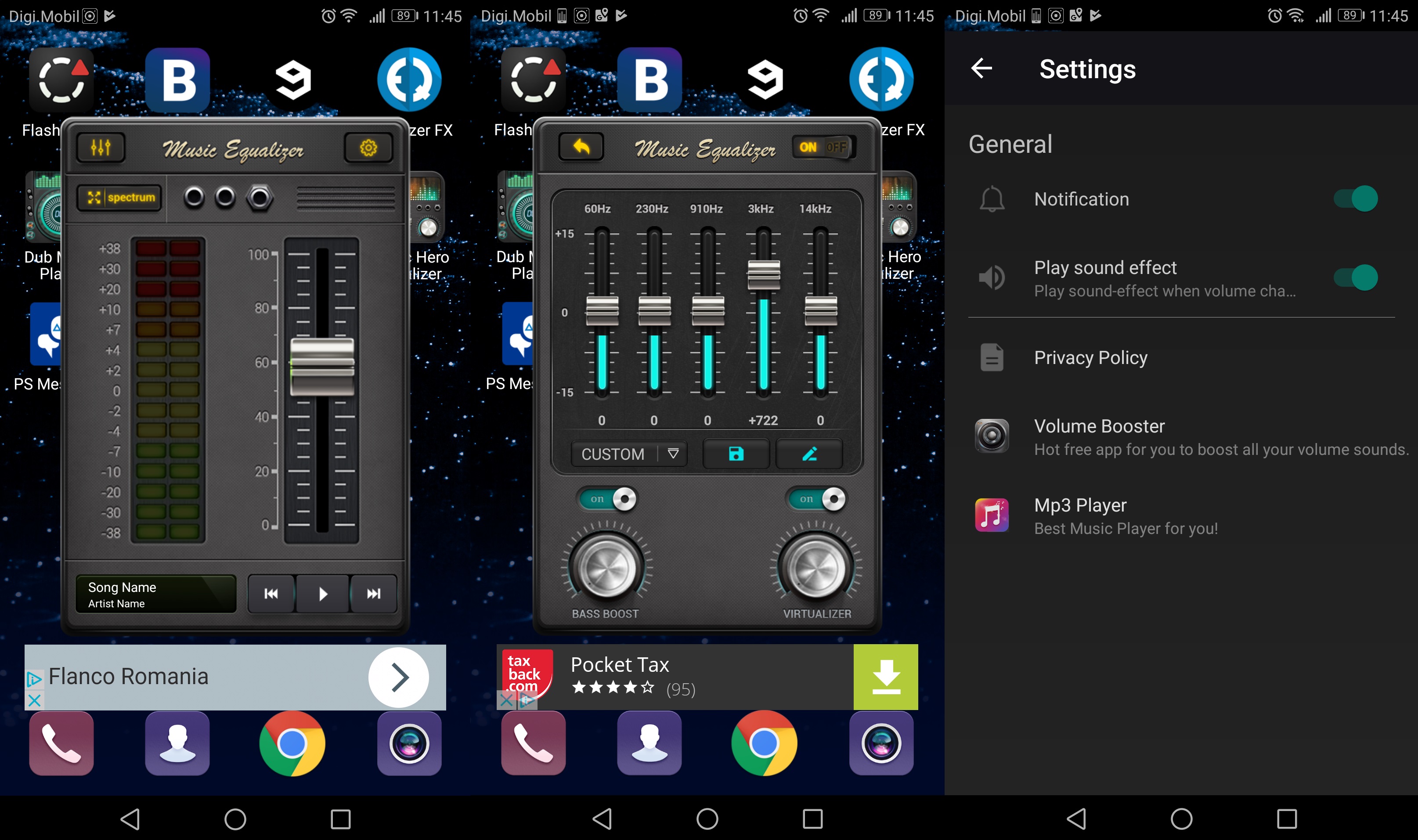 I was a little put off by the fact that it contains so many apps, but you got to understand the developers. The app also has a solid music player, giving you enhanced controls over your tracks.

Equalizer – Music Bass Booster was compatible with all of the four different music players I’ve tested in conjunction with. I would advise you to use a set of headphones for the best effect.

This equalizer app looks a lot like a studio-type setup. You have a volume slider with a live music stereo led VU that will give you something to look at while you’re listening. 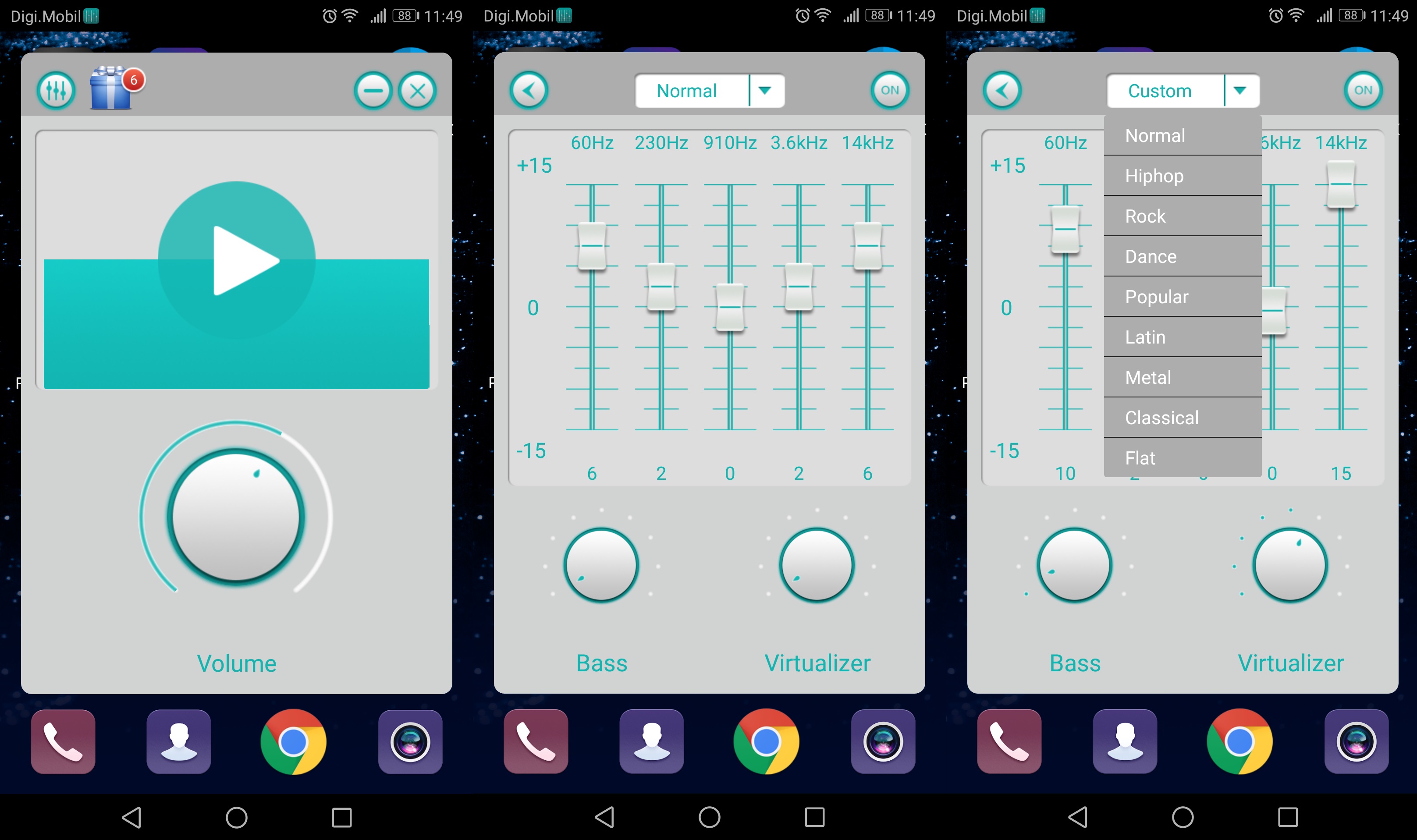 The five band equalizer will allow you achieve various sound effect levels if you decide to stay away from the 9 genre-based presets. You have your usual bass booster, a solid virtualizer effect and a reverb preset.

I didn’t like the fact that Equalizer doesn’t load automatically when your phone starts up. Other than that, it does what it is supposed to very well and it doesn’t force unwanted crap down your throat.

I didn’t use an equalizer before writing this article, but I decided to keep Headphones Equalizer after playing with it for a while. I could be just imagining things, but I felt the sound was superior to most of the other equalizers that I’ve tested with my headphones.

What equalizer do you use? Please let us know in the comment section below if there’s any good entry we missed.