Thankfully, we have said goodbye to the days of terrible game audio. For a long time, sound design was hard to master, even for game designers themselves. But all of that is in the past. Games are more intuitive now, as they give the player both audio and visual cues. For the most part, visual cues are easy to follow, but audio cues can be hit and miss. 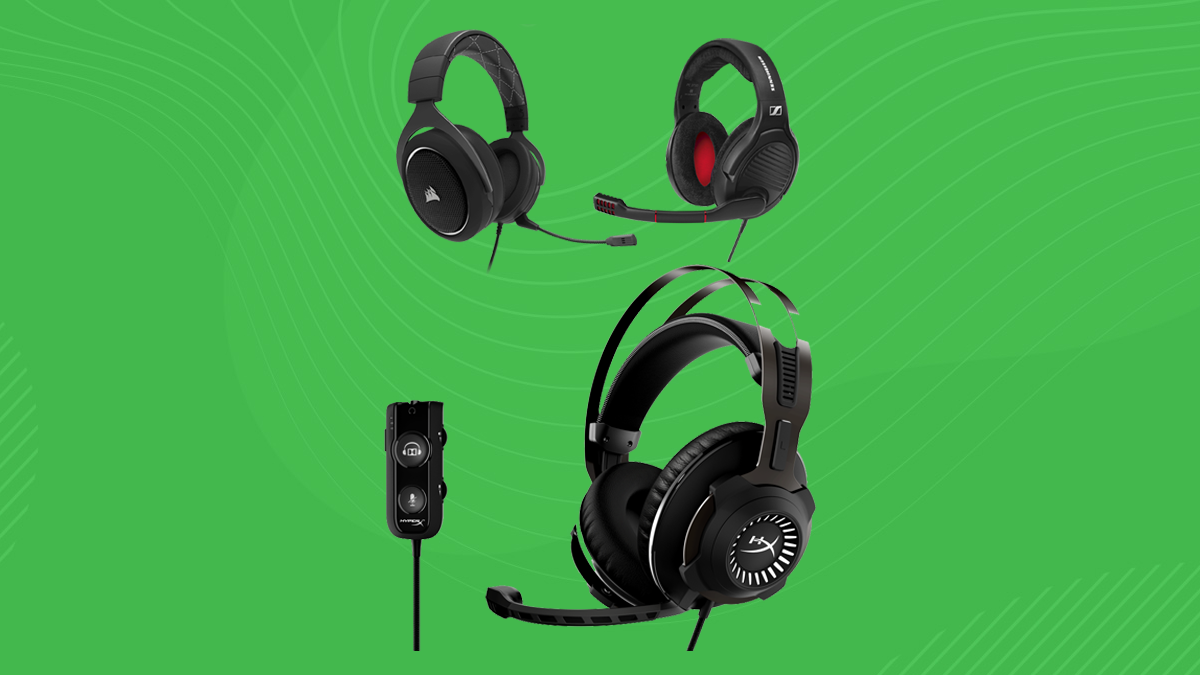 This is especially true in competitive multiplayer games. Knowing where your opponent is coming from is crucial. It may very well be the deciding factor between victory and defeat. This is why so many people are willing to invest in a good 7.1 headset.

However, 7.1 headsets aren’t easy to nail perfectly. In fact, 7.1 audio sounds worse than stereo audio in a lot of headsets. A lot of companies just throw in a software equalizer and call it a day. But don’t worry, we’ve got you covered. Here are some of the best 7.1 Surround Sound headsets in 2021.

We genuinely doubt that the name HyperX requires any sort of introduction. If you are a hardware enthusiast, you know that their Cloud II and Cloud Alpha headsets have been remarkably successful. Well, the Cloud Revolver S takes everything great about those two and turns it up to eleven. This is an easy win for the top spot on our list.

The Cloud Revolver S is a wired gaming headset that works with both consoles and PC. Many people are big fans of the design, and we fall into that group as well. The earcups have a soft-touch rubberized material, which feels great to the touch. On top of that, the steel frame provides a lot of rigidity to it. The HyperX logo is proudly visible on both earcups but in a soft white color.

As for comfort, we have a self-adjusting headband that sits beneath the metal frame. This works surprisingly well, as the clamping force is minimal yet secure. The memory foam earcups also play a big role in providing a comfortable experience.

The detachable boom microphone is maneuverable and built well. We love the detachable nature of it, so people can just plug it in when needed. Noise cancellation is excellent with the microphone, the voice sounds natural and has a bit of boom to it, which is great for clear communication.

The audio quality is phenomenal. Like most gaming headsets, the bass proudly marks its territory here. However, the rumble is tight and controlled. The mids are smooth and flow beautifully, while the highs sound a bit bright without being harsh. In terms of surround sound, the 7.1 feature works well and definitely helps a lot in games that have a good sound design.

Overall, this is still the best 7.1 surround sound gaming headset out there.

While a lot of competitive gamers might not have much experience with Sennheiser, audiophiles will be happy to see them on this list. In case you don’t know Sennheiser is a legacy brand when it comes to high-end audio gear. Fortunately, the PC 373D headset lives up proudly to the Sennheiser name.

Sennheiser gaming headsets have a running theme of great build quality and design. Although they are using matte black plastic here, it looks and feels much better than most of the flashy gaming headsets out there. There are a few red accents here and there. The mic can be flipped up, but it is not detachable. A small volume knob on the left is also a unique characteristic for this one.

The drivers inside are angled for better comfort and sound. Apart from that the velour padding is very comfortable and creates a nice seal. They feel great on the head, regardless of the head size. It also has a removable cable, which connects to the 7.1 USB dongle. A single button on this dongle indicated that Dolby surround sound is active.

As for the microphone, the output is quite clean. However, it can end up sounding a bit nasally. There is probably a lot of processing going on here. Fortunately, it’s clear and good enough for communication. You can use the default sound signature instead of the EQ presets. It sounds better that way anyway.

The Treble sounds nice and bright, the bass is deep and warm, and the midrange is quite forward. Combine that with a fantastic soundstage, and the 7.1 surround sound is just the icing on the cake. While we wouldn’t recommend it for music, turning on 7.1 in this headset can make a massive impact while gaming. Hands down, this is one of the better implementations we’ve seen.

If the EQ software was more fleshed out, and the mic sounded a bit better, this would have easily earned the top spot. It still earns a strong recommendation despite those minor issues.

Razer is one of the bigger brands when it comes to PC peripherals. However, they have been a bit hit and miss when it comes to audio. Casual folks love these headsets, but to the more fine-tuned ear, Razer’s audio style isn’t the best. Well, the Blackshark V2 Pro attempts changing that. This just might be Razer’s best headset to date.

The BlackShark V2 looks quite different when comparing it with previous Razer headsets. With that in mind, it’s honestly quite refreshing. Razer’s same design language was getting a bit stale, and it’s good to see something different here. The unique shape of the earcups along with the stitched fabric along the headband looks great. Other than that, the sliding mechanism is quite smooth as well. The gauge wires look fragile, but they hold up well.

Comfort is really impressive here. That’s a bold claim from someone picky about this stuff. However, Razer does well here thanks to the fabric ear cups. These are similar to SteelSeries Arctis headsets, and it works wonders. Heat build-up isn’t a major issue either. They aren’t all that heavy, which is always great with a wireless headset. Battery life is also quite good at 24 hours.

The connection is rock solid as well. This is always great for a wireless headset. Gaming performance is impressive, and this is Razer at its best. The imaging and direction are solid, and they sound extremely detailed. It allows you to hear what you need to hear in a competitive match. In the end, that makes a major difference. The THX spatial feature is also quite surprising.

I’m not one to usually make a claim like that, but it works surprisingly well. Furthermore, there are so many features to play around with within the software. Sure, not everyone cares about that stuff, but for those that do, this is a welcome addition. Finally, it really is refreshing to see an all-around solid wireless gaming headset. We just wish they were a bit cheaper

Corsair excels in making quality peripheral, especially for competitive gamers. They know the importance of a decent headset, and how it provides a competitive edge. The Corsair HS60 Pro is built around that ideology. It also happens to be a great headset for listening to music.

This headset follows the same design language as the rest of the “HS” lineup. The low-profile matte black aesthetic will please fans of minimalism. The grill design on both earcups gives the impression of an open-back design, but these are closed-back headphones. They are well put together and have a hefty feel to them.

The padding feels like it is of good quality and won’t irritate the skin. The earcups have memory foam inside and have some swivel to them. Unfortunately, the inside can feel a bit shallow for larger heads. In terms of the clamping force, it can feel a bit tight against the years at first. So, you’ll have to break them in a bit.

The sound signature is great for gaming. You can easily pinpoint the enemy’s location, even in stereo mode. Turn on 7.1 surround sound to feel the gunshots and explosions. Bass also makes its presence known since it is punchy and deep. The treble is pleasing, but the mids can get a bit muffled. This is most likely due to the deep bass.

As for mic quality, it’s not the best in the world, but it’s good enough for Discord. It’s reasonable, even though we have heard better for sure. You can also mess around with the iCUE software to tweak the EQ. Overall, the headset is a viable alternative if you don’t want to spend a ridiculous amount of money on an expensive 7.1 headset, this is a great value.

It is almost ridiculous just how good of a headset the Razer Kraken X is. It is intended for the budget gaming market, yet it puts a lot of more expensive headsets to shame. If you don’t have a lot of money to spend, you’re not going to feel left out with the Razer Kraken X.

The Kraken X still dons the usual Kraken look. However, it gets rid of the flashy aesthetics and Chroma RGB. Instead, they decided to with a cleaner matte black look. It is also very lightweight, coming in at 235g. As you can probably guess, it is very light on the head. Comfort is excellent, almost better than other Razer headsets.

We feel this way because of the light clamping force. Despite that, it is going to fit all head sizes perfectly. The leather earcups are great. The Kraken easily gets a 10/10 in terms of comfort. It uses a 3.5mm cable, so no dongle for 7.1 surround sound.

However, you can turn the surround sound on through software. It works surprisingly well, and Razer headsets are a few that give 7.1 surrounds sound the justice it deserves. As usual, there is a lot of focus on the treble and bass. This is par for the course in most gaming headsets. The mids end up sounding a bit inconsistent, and the treble can get a bit harsh.

Apart from that, there’s not much wrong with the Kraken X. Considering the value you get out of this headset, the slight shortcomings can be forgivable. If you don’t need surround sound, the Corsair HS50 and HyperX cloud stinger are good alternatives.

Ace Luke
Ace Luke is a Washington Accord certified computer engineer with a keen interest in gaming and reviewing computer hardware since childhood.
Trending
Close