ASUSTeK or ASUS has been the pioneer in manufacturing PC hardware components since the time they solved Intel’s 486 problems, ever since then they have been building high-quality PC Components but the same can’t be said for their peripherals. Peripherals manufactured by Asus are mostly overlooked and in reality, they are underrated as well.

With the flashy aesthetics and RGB craziness of ROG products, I expected their peripherals to be more popular but because of the way the PC peripheral market performs – Asus’ peripherals don’t get the traction they deserve.

Personally, I and the people in my gaming circle are of the impression that Asus’ peripherals are not popular because they might not be good and because of the absurd pricing of certain Asus’ peripherals, this genuinely checked all the things that make a peripheral underwhelming.

However, the Rog Strix Fusion 300 that was sent to us by Asus looks like the light at the end of the tunnel. On paper, the Fusion 300 looks like a solid performer with the exclusive airtight chambers, 50mm Essence Drivers and Surround Sound capabilities. Are these on-paper specifications any good? Let’s find out!

The Fusion 300 comes in a transparent hard plastic box, that is an uncommon approach and I prefer solid boxes over plastic ones. Still, the front side of the box is very eye-catchy and depicts the new updated ROG logo and RGB color scheme.

The front right side is half-transparent, you can see the headphones without even unboxing it, which is a nice touch.

The rear side of the box is informative, at the right side we can see the headphones in all their glory and the left side showcases all the highlighting features of the headphones, we’ll let the image attached below help you in reading the features in details.

The design of the Fusion 300 is unique and screams “gaming” at first glance. One thing to note here is that this is definitely not the type of headphones you can wear when you’re out and about, so keep that in mind if you plan to use them outdoors.

Starting with the overall design and first impressions, the headphones feel very well-built with premium materials. The earcups are made out of plastic with a fusion of metallic and matte black colour scheme. I also noticed the plastic accents that light up when the headphones are powered through a USB connection.

The headband’s outer shell is mostly plastic but internally, an aluminium height-adjuster is running across the headband which makes the headphones durable and solid. Below the plastic headband, there’s a fabric mesh padding which is acceptable but the not the best, to be honest. I’d appreciate a soft leatherette headband instead of the mesh material.

Coming at the side of the ear cups. As we’d expect, the earcups can swivel and rotate for better a grip. Talking about the grip, Fusion 300’s clamping force is a little on the harsher side and you might feel discomfort in the initial phases but you’ll get used to it in a day or two.

Asus provides two pair of ear cushions, and the ones I liked the most are the protein leather earcups. They create a nice seal around the ears which ultimately leads to a better noise-isolation. Due to the seal being perfect, I experienced zero sound leakage which genuinely extracted amazing frequency response as well, we’ll get to that later in the performance section. Nevertheless, the leather ear cups do make your ears feel warm after a while.

I wouldn’t recommend them to gamers or anyone who spends long hour on their computers, the leather earcups are bound to get hot after some time  On the other hand, the fabric mesh cushions provide breathability for better thermal performance on the long run but don’t provide the same level of comfort when compared with the leather ones.

In terms of connectivity, the Fusion 300 can be connected with PC, Mac or any device that has a 3.5mm jack. The lighting and surround sound is dependant on the USB connection though, but that’s not a deal-breaker since the headphones sound amazing even in analogue mode (3.5mm connection). The 3.5mm cable is removable and the jack can be found on the right ear cup while the USB micro-B port is located on the bottom of the left ear cup.

There’s also an additional button at the backside of the left earcup which is a toggle for the virtual surround sound feature. All wires that come incorporated with the Fusion 300 are braided but because of the sub-standard quality, the wires are stiff and create a noise when they are being rubbed against anything which can get annoying, but it is acceptable if you don’t move too much.

The microphone’s placement is odd and uncommon, it is retractable which is appreciable but getting it out of the complex hinge is a task, you’d have to put force using your nails to get it out. This is a major flaw, and I expect Asus to fix this with a better implementation of the microphone’s locking mechanism. But again, when retracted it feels like as if this headphone is not even integrated with a mic which is a nice and stealthy approach.

The overall comfort, build quality and feel of the headphones is almost on par with all of its competitors but the harsh clamping force could be better and it is the only factor that is holding it back.

The performance of the Fusion 300 is the most astounding thing about it. I didn’t expect the headphones to be as good. Remember we talked about the “the light at the end of the tunnel”? Well, indeed the Fusion 300 is more than just a light at the end of the tunnel because this is a solid performer and being an audiophile, I don’t take the performance criteria lightly, because let’s be honest would you like an aesthetically pleasing but a bad sounding headphone? I guess not.

The terminologies are as follows:

The gaming performance of The Strix Fusion 300 is on par with all of its competitors. The general sound signature of the headphone is sharp and refined, unlike the warm and dull sound signature of the Razer Kraken Tournament Edition I reviewed about a week ago. In gaming, due to the sharp highs, you might have to lower the volume a bit or you might get a headache in the long run. But, the lows are solid, thumpy and tight at the same time which makes it up for the overly saturated highs. The mids are great as well, I could easily distinguish footsteps and gunshots’ direction in CS: GO, Battlefield V, and almost all FPS titles.

Testing the headphones in AAA titles, such as Metro Exodus, Sekiro: Shadows Die Twice and The Witcher 3 is a blissful experience. The vocals are crisp because of the refined highs, topped off with the tight deep lows. I couldn’t be more satisfied. To conclude, I can safely say that these are great “gaming” headphones which didn’t fail to impress me in any of my gaming tests.

I love it when “gaming” headphones can do music the right way, I was disappointed when I tested the Kraken TE because they ultimately failed in my music tests. But, the Fusion 300 shined through it like a boss!

The Fusion 300 gets loud on both analogue and digital connection. I’ve never heard a gaming headset get so loud, even though I’ve tested many. Though, the highs are harsh, sharp and unpleasant. But still, firing up some good old tunes including Pink Floyd, Dire Straits, Scorpions, and the Beatles with a bit of modern-era music (R&B and hip-hop), I was astonished by the detail the Fusion 300 provided.

The lows were booming and detailed, the mids were pretty much adequate. The highs were still being on the top of both the lows and the mids, even then the overall music experience was good enough. 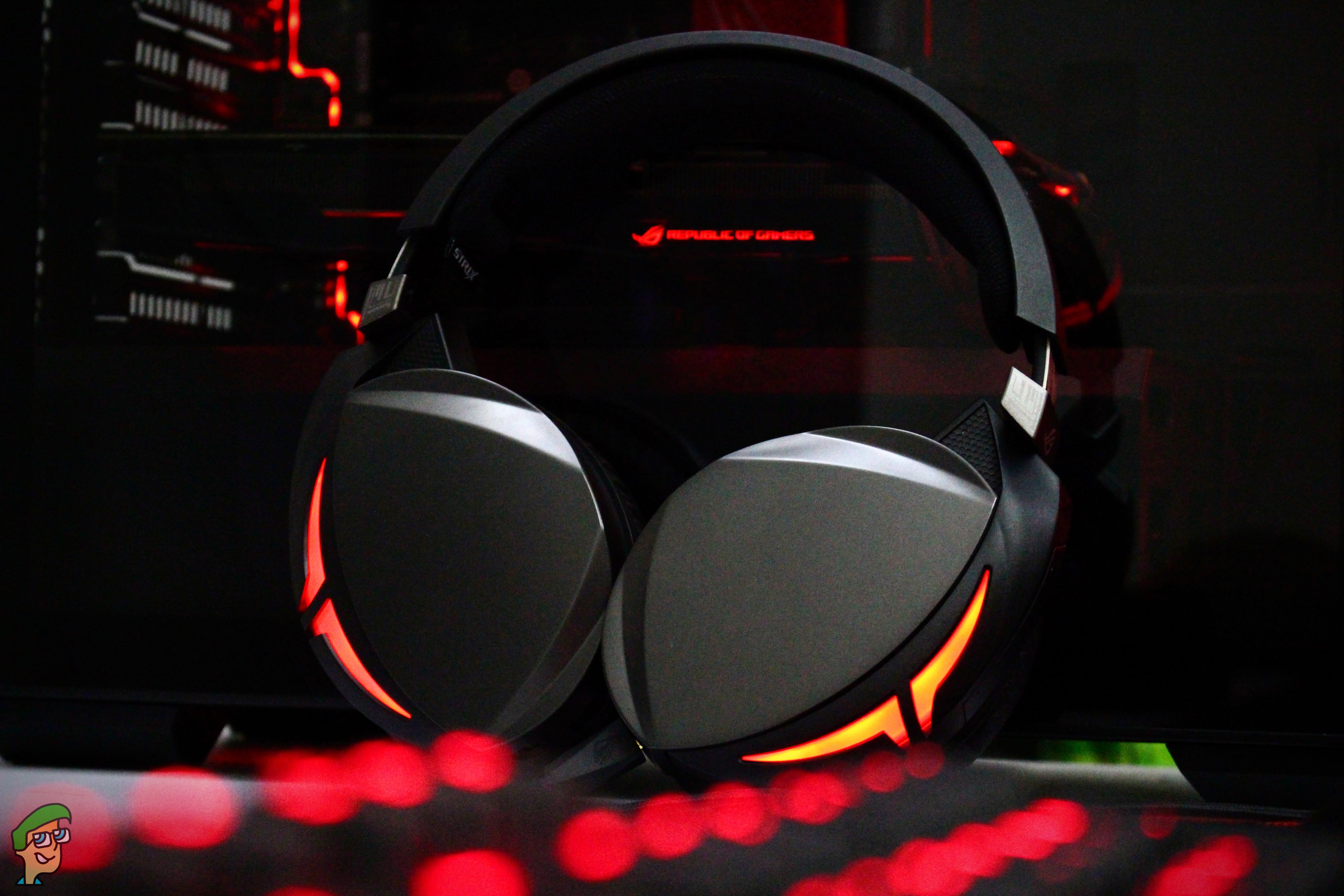 One major flaw I noticed was in the soundstage of these headphones; It is sub-standard and not satisfying by any means. You’ll feel like the sound is coming from two stationary directions as if the sound imaging is being isolated, feels like you are surely wearing a headset. Comparing it with my Monoprice Retro, the soundstage is day and night. It almost feels like I’m listening to the music live in a big spatial room on the Retros. But I am not complaining here since the Fusion 300 is a gaming headphone at the end of the day and the soundstage is just about perfect for gaming.

Overall, I think this is the most underrated gaming headset I’ve ever tested and If only this gets more popular I see healthy competition coming in the way of Hyper X, Logitech and especially Razer.

The only reason this factor is getting a separate heading is that in the Fusion 300, this virtual surround feature is implemented with great workmanship. Just like the Hyper X Cloud 2s, the 7.1 surround sound doesn’t feel like a gimmick at all and I loved how it changed the overall sound stage of the headphone. This also slightly improved the soundstage issue I addressed above. In AAA titles like Battlefield V and Arma 3, I enjoyed the virtual surround feature. But for competitive titles like CS: GO, the surround sound feature is not recommended as it can hinder the frequencies that are going to help you distinguish enemy footsteps.

This is the most disappointing part of the Fusion 300. The retractable microphone is not impressive and sounds dull with zero detail. But, the microphone is still acceptable for casual communication over the internet. When retracted the microphone mutes itself which is definitely handy. Other than that, there’s zero noise cancellation and the “Noise Gate” feature available in Armoury II software doesn’t help whatsoever. Overall I expected much more from Asus in terms of microphone quality but it is what it is. Below is a quick microphone test to help you judge better.

The Asus Armoury II software is simple and effective. We have a sound optimization tab that helps in refining audio experience to some extent but in my opinion, leaving it the “Flat” mode is the best. We can also toggle reverb and virtual surround withing the software as well.

We do have an EQ function with Bass Boost, Compressor and Voice Clarity toggles. Again, in my opinion, it is best to leave the headphone in its most natural state rather than bombarding its already perfect audio experience with unnecessary software additions.

You can also set Microphone recording volume, Playback volume and play around with the “Perfect Voice” effect.

The lighting tab contains lighting controls including, “Static, Off, Breathing” modes. The lighting is red only and the brightness of the light is controllable as well.

To conclude, the ROG Strix Fusion 300 is a very underrated headset. The unique, aggressive design, adequate comfort, and optional ear-cushions topped off with great software make it a complete bundle. I wasn’t expecting such brilliant performance, with the crisp highs, deep lows, and adequate mids. The headphones might be able to give a tough time to many of their competitors.

But due to the tight clamping force and sub-standard microphone, it might not be your perfect headset. Nonetheless, I can proudly recommend these to any gamer out there without a second thought because of the astounding audio reproduction of the Fusion 300, period.

VERDICT:The Fusion 300 packs a lot under its hood, and is definitely the best in terms of audio quality, comfort, and design. If only the microphone was as great as the whole headset itself, this could be the new best gaming headset under a hundred bucks.