The executable Agent can originate from a lot of different applications. Most of the time, the agent.exe will be traced back to InstallShield software. Many software publishers use the InstallShield technology to create installations for their applications which often include an agent.exe process used to contact their own servers and install updates.

However, agent.exe is an extremely popular executable name and is used by a large number of other software. Even though the application that uses agent.exe might be different, the purpose is most likely the same – to facilitate the connection between a certain application and an external server.

Here’s a shortlist of popular applications that deploy an agent.exe executable:

Note: Keep in mind that this is just a shortlist. There are a lot of other software that use the agent.exe process to update their applications.

Depending on which software it belongs to, the Agent executable can have different purposes.

If the agent.exe executable is confirmed to be a process of InstallShield, then it’s responsible for monitoring InstallShield servers and determine if you have the latest version of a certain software installed.

However, agent.exe can also be a process of the Forte Agent software. In this case, the executable is responsible for keeping your news feed & inbox up to date.

Some users have been reporting getting false positives regarding agent.exe from security suites like Avira and AVG. Although it’s very likely that your 3rd party antivirus has mistakenly flagged it because it was trying to reconfigure something on your hardware, the issue is definitely worth investigating.

Nowadays, most malware (regardless if it’s adware, spyware or trojan) will try to camouflage itself inside a file system folder in order to avoid security checks. Because of this, is important to check the location of agent.exe. To do this, open Task Manager (Ctrl + Shift + Esc) and locate agent.exe in the Processes tab. Then, right-click on agent.exe and choose Open File Location. If the revealed location is in C:\ Windows\ System32 or C:\ Windows, you’re likely dealing with a malicious executable that is masquerading as a system process.

Note: The default location for the InstallShield Update Service Agent is in  C:\Program Files \ Common Files \ InstallShield \ UpdateService \ agent.exe. However, you might also find the agent.exe executable in a folder associated with the application that is using it.

One way to confirm or infirm this suspicion is to upload the executable to VirusTotal for analysis. Just upload agent.exe via the Choose File button and hit Scan it. 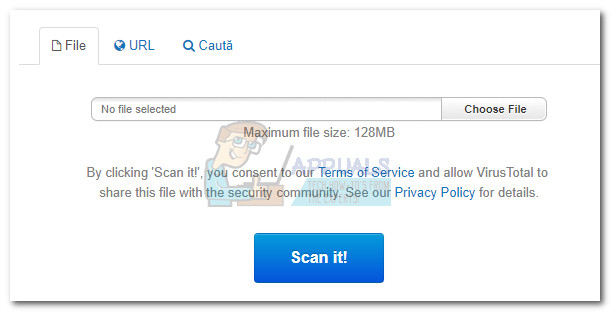 If the scan revealed a potential infection, you’ll need to scan your system with a powerful malware remover. If you don’t have one already installed, we recommend using Malwarebytes to remove the malware from your system. If you’re not familiar with the software, please follow our in-depth (here) article about using Malware bytes.

Deleting the agent.exe executable is not advisable in any type of scenario. If you’re noticing high CPU usage caused by agent.exe, you should investigate the application that uses it instead of deleting the executable manually.

It’s very likely that you’re seeing high resource consumption by agent.exe because the process is currently handling an update. If you find that this issue is going around in a consistent matter, you should deal with the application in question. There’s a chance that agent.exe has glitched out, in which case reinstalling the parent application might resolve the issue.

What should I do?

As this is an update process for possibly an essential software/game for you we highly recommend you to just let the process run and wait for an hour or two. After that, if the process is still running you can simply try to clear your temporary files folder as it’s reported by a lot of users that if a file corrupted or damaged while updating it can cause some high resource usage on your computer. First of all, simply restart your computer to safely end the process. Now head over to the article where we have explained how to remove temporary files in detail. After deleting the temporary files if the process is still using a High CPU we recommend uninstalling the suspicious program.

What is agent.exe and Should I Delete it?